Review: The Messenger by Siri Mitchell 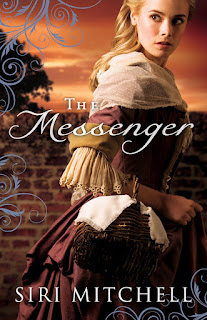 The Messenger
By: Siri Mitchell
Publisher: Bethany House
ISBN: 978-0-7642-0796-9
About the book:
Hannah Sunderland felt content in her embrace of the Quaker faith...until her twin brother joined the Colonial cause and ended up in jail. She longs to bring some measure of comfort to him in the squalid prison, but her faith forbids it. The Friends believe they are not to take sides, not to take up arms. She is not allowed to visit him, even if she were able to secure a pass.
Jeremiah Jones, a Colonial spy, needs access to the jail to help rescue me important to the cause. Upon meeting Hannah, a plan begins to develop. Who would suspect a pious Quaker visiting a loved one?
But Jeremiah is unprepared for Hannah, for her determination to do right, to not lie. How can one be a spy and not lie? Hannah, in turn, is surprised by Jeremiah...for the way he forces her to confront her own beliefs, for the sensitivity and concern he shows her despite the wounds he still carries.
In a time of war, can two unlikely heroes find the courage to act?
Review:
With the city of Philadelphia under British occupation, Hannah Sunderland and her family, devout Quakers, struggle to survive in the midst of a conflict that has seen them disavowed and misused by both sides because of their pacifist beliefs. When a British officer commandeers the family home and news arrives that her twin brother, disowned by his Meeting and family for joining the Colonial army, has been imprisoned, Hannah finds the religious and familial dictates to stay uninvolved in the conflict increasingly untenable. Jeremiah Jones, an embittered ex-soldier who lost an arm in Pontiac's Rebellion fifteen years earlier, is determined to see the British pay for their callous disregard of his service and sacrifice simply by virtue of his being born a colonial. Under the occupation his tavern is a veritable hotbed of potential intelligence from free-drinking British soldiers, and when Jeremiah receives word that Washington wants to organize a prison break the ill-equipped Jeremiah finds himself thrust into the unlikely position of spymaster. Hannah's determination to visit her brother in prison in spite of her family's dictates provides the perfect cover -- but can a woman who refuses to lie, whose religious convictions Jeremiah despises, become a trusted confederate in a daring plot to thwart the British?

I adore Siri Mitchell's writing, but must confess that The Messenger took a few chapters longer than normal before I found myself truly invested in the story. When first introduced to Hannah, I must admit to sharing many of Jeremiah's frustrations with her Quaker beliefs, particularly their refusal to take sides in a conflict, especially when that means turning a blind eye to horrific abuses of power. And therein lies the genius of this novel -- Mitchell is careful to point out that there were those on both sides of this conflict that were imperfect, equally capable of committing heinous acts in the name of their "cause." Through Hannah and Jeremiah's respective struggles to come to terms with their wildly divergent backgrounds and the time in which they lived Mitchell explores the role of faith in a time of war in her trademark compelling fashion. This is historical fiction of the highest order, a novel that brings to brilliant life everything from the excesses of General Howe's occupation to the squalor of the prison housing Hannah's brother. The Messenger is a novel wholly of its time period but also transcending it, stepping out of the realm of its 18th-century trappings to speak to modern readers who live in a politically-charged, 24-hour news cycle and issue a challenge -- why do we believe what we believe, and have we let positions or protests trump the bedrock tenets of the faith to which we claim to adhere?
Mitchell alternates between Hannah and Jeremiah's point-of-view, using first person to immerse readers deep in their fears and struggles as they seek to fight against a system where the odds are overwhelmingly stacked against their success. As is the norm in Mitchell's historical fiction, she doesn't romanticize the past or shy away from the brutal cost of conflict. No matter what time period she chooses to explore, Mitchell's historical fiction shines because it has the ring of authenticity, richly saturated with period detail and customs, populated with characters whose heartbreak and emotions are so raw, fully realized they spring living and breathing from the page, so real you can't help but be impacted by their journey.
For those who favor their historicals with a dash of romance, The Messenger delivers -- though not, perhaps in a typical fashion. Hannah and Jerimiah's relationship develops at a gloriously slow burn, forged out of the fires of unfathomable pressure, all the more memorable because when they're first introduced they are the last people you'd expect to fall in love. But even as Hannah and Jeremiah challenge each other, Mitchell forces the reader to confront prejudices, question beliefs, and to count the cost of acting in faith, particularly when what one may be called to do or say flies in the face of conventional wisdom. Fraught with tension and conflict, Mitchell sheds light in one of our country's darkest, most tumultuous hours, challenging readers to examine why we believe what we believe even as we become invested in Hannah and Jeremiah's story. The Messenger is a rich, meaty, thought-provoking, at times unsettling read, a stellar example of Mitchell at her finest, a story that you'll ponder long after you finish the final pages. Very well done indeed.
Posted by Unknown at 12:49 PM

@Kristin - Oh I hope you get to read it soon, Kristin! It is wonderful!

I love Siri's books. So much so I mailed them to my sister and she loves them too. Look for reviews on her book under squiresj on Amazon and my real name on other sites. Albris, goodreads also have some I posted.
jrs362 at hotmail dot com

@squiresj - Thanks for stopping by! Great to meet another fan of Siri's work -- hope you're sister enjoys them too!