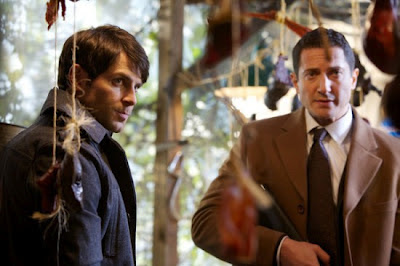 I haven't blogged about Grimm since JANUARY. WHAT IS WRONG WITH THIS PICTURE?! (I am so distractable...) Rest assured by love for this show has by no means faltered -- in fact, I could make a good argument that episode ten turned the show from good to great, and the uptick shows no sign of a downturn in subsequent weeks. "Organ Grinder" is Grimm's deliciously (no pun intended) creepy take on the Hansel and Gretel story, and people it works so well.
The episode opens with two emaciated teenagers running through the dark woods, with creepy looking creatures replete with vulture-like, hooked noses chasing them. One of the teens is grabbed and dragged back to an isolated barn where we see a girl being thrown into a FIRE PIT. The other teen ends up going over a waterfall and washing up on shore the next day -- enter Nick (David Guintoli) and Hank (Russell Hornsby). Just prior to being called to the scene, Nick is at Monroe's (Silas Weir Mitchell) house, trying to drum up the courage to tell Juliette about his newly discovered-Grimm "abilities." Monroe is no help -- as he tells Nick, most regular humans can't process creature transformations, so her brain would likely turn to mush. Anyways, skip ahead to the autopsy results on the teenager -- he was completely drained of blood, lots of vampire jokes are exchanged, and Nick and Hank decide to canvass Portland's street kid population to see if anyone knows anything.
Generally speaking I've liked Nick since the beginning of the show, but this episode marks a turning point in Giuntoli's performance, an added "spark" that really makes me buy him as a Grimm and everything that is supposed to involve. This is first exhibited in Nick's interactions with two street kids who knew the victim -- Gracie (Hannah Marks from Necessary Roughness) and Hanson (Daryl Sabara -- remember Spy Kids?). I absolutely loved Nick's compassion for their rough lives, and the way that translated into a resolve to make sure this doesn't happen to others. He gets Juliette (Bitsie Tulloch) to join him in TAKING THE KIDS TO DINNER! How adorable was that?! I mean seriously! (The icing on the cake being his clear appreciation of Juliette's ability to get Gracie to open up to her -- his love for Juliette, his appreciation for everything she is and can do, well that makes just the idea that he might have to break up with her in order to protect her absolutely gut-wrenching!)
To make a long(ish) story (somewhat) shorter, Nick and Hank discover links to their victim at a free clinic frequented by street kids, followed by a disturbing call to an accident where a man (revealed to be one of the beak-nosed creatures) is found illegally transporting HUMAN ORGANS. Now this is all kinds of disgusting, but as far as transforming the Hansel and Gretel story into a modern-day police procedural? Well, people, it works brilliantly. The witch of legend preyed on children in order to cook them, and these creatures prey on young, healthy humans in order to harvest organs for creature "enhancement powders." Oh, and the doctor at the center of this hot mess? Played by Valerie Cruz, a.k.a. Kathy Sullivan on the SyFy show Alphas. 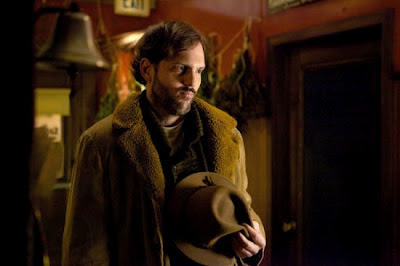 The discovery that human organ trafficking is involved brings me to Monroe, who as we all know is consistently the best part of this show. :) When Nick goes to Monroe seeking information about the Geiers, our long-suffering blutbad finally snaps and there's this hilarious discussion about how everything is ALL ABOUT NICK ALL THE TIME. This is over dinner and a conversation that gets really awkward REALLY FAST when the subject comes to "creature enhancement" (HA!). I really like Nick and Hank's partnership, but Nick and Monroe -- oh they make my heart sing. Their bromance is a gem, a GEM I tell you! Anyways, all of this leads to more hilariousness when Nick gets Monroe to go buy some human gallbladder powder, which is hilariously awkward (it is getting to the point where Monroe should ask to be an official police consultant, don't you think?). Side note: wasn't Monroe's hat in this scene amazing?
When Nick learns which shop is selling human organs, he makes a trip there and this is the first of at least two times in this episode we get to see him really start to leverage his status as a Grimm. He's not circumventing the law, which is great because I like the fact that he is a very conscientious cop, but he's using his legendary Grimm status to influence creature/people and quite frankly I LOVE THAT. Moments like ordering the shop owner to cease & desist in the organ powders trade or basically scaring a creature nurse into flipping on her fellow "doctors" -- well, Nick as a Grimm cop adds a little extra spark and verve to his investigations. Giuntoli's always been good, and pleasant, and easy on the eyes -- but this episode marks a turning point, where I really started to buy him as someone who could live up to the legend of his ancestors.
So anyways, Gracie and Hanson are snatched by the fake Geier doctors and taken to their super-secret location to have their organs removed. EEEK! In an unexpectedly neat nod to the original story, Nick and Hank discover the kids' location by following a trail of shell necklace beads (as opposed to bread crumbs). The kids are saved, the evil witch Geier doctor is cooked, all is well, and this is one of the best episodes of Grimm to date. Oh! But I can't close without mentioning Captain Renard (Sasha Roiz), because when he gets a severed ear in the mail from the Reapers -- well things are getting really interesting with him, are they not? Plus, I can't hide it any longer -- the man is HOT. When he shadows Nick & Hank on the mobile home sting, and he's all waving around a friggin' RIFLE...you know the man means business. *wink*

Between Mr. Gold on Once Upon a Time and Captain Renard on Grimm...I have just got to say, TV this year is good for morally ambiguous, attractive men in suits.
Posted by Unknown at 6:39 AM

I've only seen one episode of this show and I have to say, it didn't hook me. Once Upon a Time is more my thing.

This show creeps me out but I LOVE IT! It's a bit gruesome but oh so interesting! IMO the rat episode earlier in the season was the creepiest but I'll watch anything with Giuntoli LOL

@Renee - Oh I know, me too! The rat ep was WILD but I think the spider ep was the creepiest for me. :)

I liked this episode on the second viewing better than the first. I love how macabre this show is, just like the fairy tales themselves.

@Karrie - Oh me too! Macabre but balanced with humor and heart. LOVE IT!

I liked this episode, but I have to say -- the one with the dragon chick last week has been my favorite. =D

"Between Mr. Gold on Once Upon a Time and Captain Renard on Grimm...I have just got to say, TV this year is good for morally ambiguous, attractive men in suits."

LOL Yes indeed. Did you ever watch Suits on USA over the summer? There's another show with morally ambiguous attractive men in suits. :)

My mom is convinced Hank is a Wesen. lol

@Tasha - Actually yes, I did watch Suits, but it just didn't grab me...I don't think I ever got past episode 2 or 3. But I do remember the suits...they were pretty sharp. :)

And that would be HILARIOUS if your mom is right about Hank!