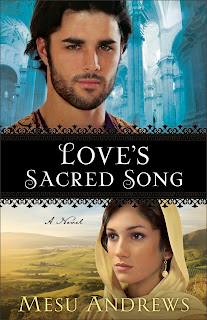 Holy cow, woman! You make ME want to read the book again! ha! Blessings on ya!

While I agree on every point you made about Love's Sacred Song, I just want to say how blown away I am (again) by one of your reviews. I wanted to sing "Just As I Am" at the end of that one! :)

@Mesu - Thanks for stopping by my friend! You're funny!! :) Blessings to you as well -- bring on the next book!

@Lori - Oh thank you my friend, you are too kind! I meant every word...this book hit me in a POWERFUL way. I'm glad if I was able to convey a fraction of that. :)

Lovely review, I keep seeing such favourable reviews I'll have to add it to my wishlist.
Now following your blog :) I love the yellow in your blog template!
- Kimberly @ Turning The Pages

@MissKimberlyStardust - Hello & thank you so much for stopping by! I do hope you'll give Mesu's novels a try, I think they are absolutely wonderful! :)