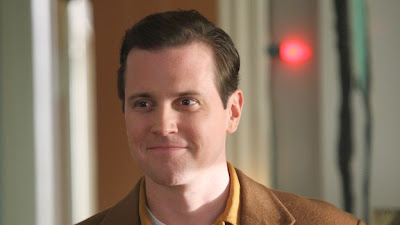 Pan Am ended its turbulent (sorry, I couldn't resist the flight-related pun!) first-season run a couple of weeks ago. And while renewal looks like a long-shot, I've got to applaud the showrunners for going big when it came to their final episode this year. "1964" is in my estimation one of the show's strongest episodes, and ratings challenges be hanged, this show didn't care about staying safe or offering resolution, throwing major plot twists and developments for all of the leads on the table in a pretty spectacular fashion. I suppose I'll tackle this final review couple by couple... 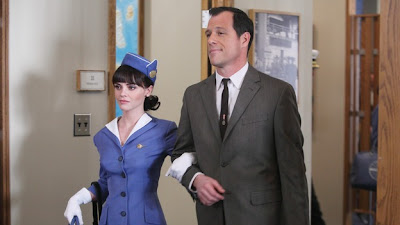 First of all I'm going to get Maggie's (Christina Ricci) story out of the way, because she's consistently been the weakest link this season as far as the stewardess storylines have gone in my opinion, and rather unfortunately she's no exception when it comes to this season finale. *sigh* Apparently somewhere between the crew's trip to Moscow and now she did a 180-degree turn and decided to become a smuggler. Seriously, Maggie, what makes you think this is going to end well? She's become Captain Broyles (Darren Pettie) partner in crime. They spar constantly and sparks fly, so of course they jump into bed together after Maggie successfully sells a case full of jewelry to some Portuguese thugs. *eyesroll* The only positive thing to come out of this development -- and that's a stretch -- is that Maggie convinces Broyles to use his stature within the Pan Am corporate heirarchy to positively influence the outcome of Dean's competency hearing (regarding the Haiti/dead passenger drama earlier in the season). 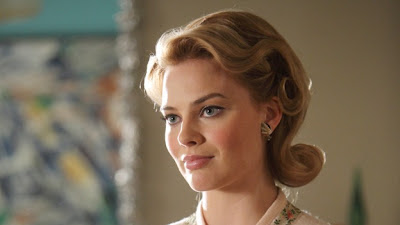 Ted's (Michael Mosley) still trying to come to terms with Amanda's (Ashley Greene) little bombshell that she wants an open marriage. Thankfully as far as my faith in Ted's character goes this concept gives him serious pause, especially after he visits Laura (Margot Robbie) to give her a replacement camera for the one she has confiscated by Russian authorities. I really love Ted and Laura together and I wish, oh how I wish their storyline hadn't been muddied with the Amanda mess this season. Laura's made her own questionable decisions this season but she really does bring out the best in Ted -- good grief Mosley's eyes just shine whenever they share scenes together. I loved the satisfaction of seeing Ted break his engagement and stand up to his overbearing father (Jay O. Sanders) and finally, FINALLY declare his love for Laura. GAH!! That scene was priceless.
OF COURSE it would be too much to expect Ted and Laura's road to happiness to be that easy. I'd love to hear what others think about Amanda's pregnancy bombshell -- personally I think she's lying. The fact that she is so desperate, so determined to marry Ted to give her a "normal" life that she actually thinks she can "buy" Laura as Ted's mistress is just mind-boggling. With her best shot at a husband slipping through her fingers, I don't think it is a stretch to imagine a fake pregnancy ploy to ensnare Ted permanently. So, if this show is in fact not renewed, Ted and Laura live happily ever after in my imagination. Just wanted to get that settled, 'k? *wink* 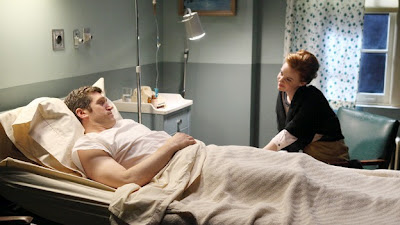 Kate (Kelli Garner) makes great strides in her spy life this episode. I've got to say once she committed to her work with the CIA she made some really impressive strides, hmm? :) When her New York contact Richard (Jeremy Davidson) shows up wounded from an unknown assailant's attack Kate faces her biggest challenge yet. Richard tasks her with delivering a critical microfilm to headquarters, cautioning her that if anyone asks after his whereabouts they're a double agent. OF COURSE the double agent turns out to be her trusted MI-6 contact Anderson (David Harbour). Kate is the bait in an elaborate sting operation at a train station, and the satisfaction of seeing her own that moment was just priceless -- the girl's got guts! *wink* After the op, while visiting Richard in the hospital on New Year's Eve, he tells her that the CIA wants her to become a real agent -- this would've been huge for a woman in the '60s, which makes Kate's concern about staying with Pan Am seem a little weird, but whatever. :P Anyways -- how sweet was the Richard/Kate moment in the hospital? I am TELLING you in my version of "the rest of the story" Kate and Richard OF COURSE finally admit they have feelings for each other AND they become a swingin' sixties spying power couple. WIN! :) 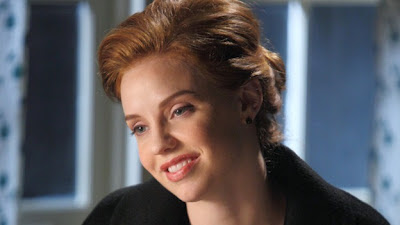 Colette's (Karine Vanasse) final storyline runs a close second with Kate's for favorite in this episode. Her romance with Omar (Piter Marek), the incognito prince, is progressing at a rapid pace -- much to Dean's (Mike Vogel) chagrin. It seems he's finally seeing the consequences of his inability to say no to women (here's looking at you, Bridget) and is resigned to losing Colette to the prince -- at least he's ceding the field with some grace. *sigh* Colette is on the verge of taking a six-month leave of absence from her beloved job for an official courtship, but all that comes to a screeching halt when the royal investigators uncover some shocking facts about her past. Everything she's known about her family, presumed lost in the war, was a lie -- in order to protect her the orphanage that granted her refuge changed her Jewish surname to a French one, and, best of all, she has a younger brother out there somewhere who was adopted!

This whole storyline just reinforces my belief that Colette is, hands-down, the best, most well-drawn character on this show. I loved the glimpses of her backstory revealed during the crew's earlier trip to Berlin, and this revelation is just the icing on the cake. While I wish more time could've been devoted to her romance with the prince (really he was to die for -- well, up until the break-up over hidden Jewish heritage thing, but at least he didn't cruelly drag it out -- and Colette, thankfully, wasn't overly invested in the relationship, so the news that she has a brother far outshines any might-have-been's with the prince), we all knew that was ultimately doomed because of Dean, right? Let me just add that Dean's offer to spend his six-month grounding period helping Colette find her missing brother was one of my favorite moments of the hour. He's committed to winning her back and frankly I loved seeing that.

The episode ends with the dawn of a new year -- 1964 -- and the beginning of a new era for every member of the Pan Am crew. In the wake of Kennedy's assassination and the developments of this hour, every principle is on the cusp of great change. I've had an admittedly roller-coaster relationship with this show, and while it faltered a bit after a promising first few episodes (most troubling concerning the crazy lack of morals) I loved the show's style and the introduction to promising talent like Vanasse and Garner. Pan Am was something wildy, refreshingly different for network television, and once I came to terms with the show's often over-the-top soap opera tendencies I enjoyed many of the episodes and/or storylines.

Personally here's how I see it playing out -- Maggie is going to crash and burn in a spectacular fashion since out of all of the four female leads she's the one most committed to a terminal case of recurring stupidity. After an extremely rocky period when Laura learns that Ted might be a father, the two reconcile when its proven that Amanda was fabricating fake children. Laura and Ted FINALLY marry and live happily ever after -- he eventually gets a captaincy and Laura becomes a famous photographer. As mentioned earlier Richard and Kate become a CIA power couple, saving freedom and the western way of life one case of microfilm at a time. And Dean and Colette? Well they find her brother of course, and eventually marry and live impossibly idyllic lives. THE END. Thoughts? :)
Posted by Unknown at 6:05 PM

I love your version of Pan Am, it matches what's in my head for each of the couples completely! I really hope they bring this back, maybe in the Desperate Housewives timeslot? I don't care really I just want this show back! Yeah it's soap opera-ish but it's so different than anything else on Network TV. Great review as always!

@Renee - Ha! So glad we agree. :) Best thing about this show...something so different. And despite some of the more questionable plotlines/episodes, still a lot of promise IMO! Thanks for stopping by!