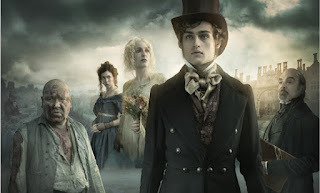 Wow, it's been a while since we've talked about Masterpiece Classic, hasn't it? After taking the month of March off for repeats and fundraising, Masterpiece Classic returns this weekend with a two-part, brand-new production of Great Expectations by Charles Dickens. Here's a bit about the production:

Now, hopefully this won't be *too* controversial, but here goes nothing -- I'm not entirely sure if I'm going to be reviewing this immediately after its broadcast. I just feel like I have SO MUCH GOING ON. *sigh* So please bear with me. :)

Just whenever you get to it, Ruth, we'll look forward to the review.

YAY! Have this pre-ordered - so excited to be seeing it SOON. =D

I've been looking forward to this alas it will be recorded; same night as the opening season of Game of Thrones and now Mad Men started up too, Sundays is proving to be a busy night!

I can't wait! I do so love Dickens--and I love what the BBC has done with Dickens in their more recent productions (Bleak House, Little Dorritt). I have been looking forward to GE since the first time I saw it mentioned for this year.

And waiting for you review will just mean we get to live it all over again later, which is fun, too! :)

I know absolutely nothing about this story, because I haven't read any Dickens yet. But I'm still super excited about it, because I loved Bleak House and Little Dorrit. :)

I'm so looking forward to watching Great Expectations! I love Dickens. I'll probably tape it though and watch both episodes together.

I'm almost finished reading the book, which is really good, and then I'll find some quiet time to watch. :)

@Rissi - Thanks friend, much appreciated. :)

@Fanny/iz4blue - Just think if you watched Once Upon a Time too. Your Sundays would be really packed! :)

@Anne - Bleak House and Little Dorrit are two of my all time favorite Masterpiece productions. And thank you! :)

@Cathy - It is rather nice that this show is short enough that it can be parsed out over 2 weeks as opposed to two months (like Downton). :)

I told my sister about this and she says Great Expectations is her favorite Dickens tale, so we will probably watch it together! It looks so dark and gothic... I like it. :)

@Jennifer - It does look deliciously dark and gothic...hope you and your sister enjoy it! :)