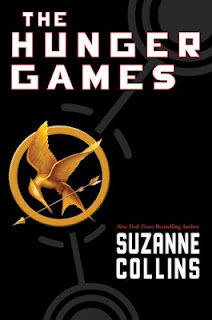 The Hunger Games (The Hunger Games Trilogy #1)
By: Suzanne Collins
Publisher: Scholastic
ISBN: 978-0-439-02352-8
About the book:
Winning means fame and fortune.
Losing means certain death.
The Hunger Games have begun...
In the ruins of a place once known as North America lies the nation of Panem, a shining Capitol surrounded by twelve outlying districts. The Capitol is harsh and cruel and keeps the districts in line by forcing them all to send one boy and one girl between the ages of twelve and eighteen to participate in the annual Hunger Games, a fight to the death on live TV.
Sixteen-year-old Katniss Everdeen regards it as a death sentence when she steps forward to take her sister's place in the Games. But Katniss has been close to death before -- and survival, for her, is second nature. Without really meaning to, she becomes a contender. But if she is to win, she will have to start making choices that weigh survival against humanity and life against love.
Review:
All Katniss Everdeen has ever known is the poverty and hunger of life in the Seam, the poorest part of District 12 in the country of Panem. Panem rose from the ashes of what was once North America, now a shining Capitol that wields an iron control over its twelve districts, with an empty thirteenth left wasted as a warning to any who dream of defying the Capitol's rule. The hardscrabble existence of life in one of the poorest districts robbed Katniss of her beloved father, forcing her into the role of family breadwinner through illegal hunting and trade. When Reaping Day arrives -- the annual event when one boy and one girl are randomly chosen to fight in the Hunger Games -- Katniss's world is rocked when her beloved sister Prim is selected as tribute. With no thought but saving her sister, Katniss volunteers to take her place, catapulting her into the national spotlight. The Games are a brutal reminder of the Capitol's iron control, a world Katniss is determined to survive. In a world that seeks to strip individuals of their humanity and individuality, a world that demands unquestioning obedience and conformity, can a mere girl with an unquenchable fire in her survive? For Katniss is determined not to go quietly into that dark night that the Games demands...
The Hunger Games is a wholly absorbing novel of one girl's fight to survive against a system that has reduced her existence, her hope of a future, to a mere "entertainment." Through Collins's relentless, tense, urgent prose we're thrust deep into Katniss's point-of-view. She's an interesting first person narrator -- because of her youth it is perhaps tempting to question the reliability of her viewpoint. But in the end it is the fact that she is such a mass of contradictions -- mature beyond her years as the family provider, jaded, a hardened survivalist, yet uncertain of her own self-worth and unaware of the effect she has on others -- that in the end is what allows one to fully appreciate the horrific implications of the Hunger Games. For Katniss hails from a future where violent death is the biggest entertainment and the greatest weapon the government possesses, where a tribute is reduced to a pawn, their innocence subjugated to society's bloodlust. And the greatest risk Katniss can take is opening her heart to the realization that she is worthy of a love beyond comprehension -- and the greatest rebellion is daring to dictate one's last breath.
Collins's first venture into the world of Panem and its districts is a completely absorbing read, a wild, pulse-pounding ride that grabbed me by the throat and didn't release me until the final page. And even then, the power of this story remained. Collins's invention of the Hunger Games is a searing indictment of our self-gratifying, 24-hour news cycle, reality entertainment obsessed culture, wrapped in a relentlessly thrilling package. There is no time wasted diving deeply into the bleak world of District 12 -- this is a new reality that the narrative drives us to accept in the same manner Katniss and her peers matter-of-factly accept the requirement of tribute and teenage death matches as a simple fact of life. The shock is jarring, Collins daring readers to examine our own culture and its -- dare we think it -- similarities to Panem in the objectification of human life through our entertainment, both reality and scripted, that sterilizes the cost of war, reducing human pain to an arena event.
For all the horror of the harsh reality Collins presents, it's shot through with rays of hope, unexpected moments of light that shine all the brighter for the bleak, repressive regime of Panem with its callous disregard for basic humanity. Peeta, Katniss's fellow tribute from District 12, is a gorgeously-rendered example of humility, self-sacrifice, and love in a world gone mad -- a love so pure, so without reservation, that Katniss simply cannot comprehend it when they first meet. Of course, by focusing on Katniss's coming-of-age journey -- and by association Peeta's as well -- Collins never really fleshes out the identities of their fellow tributes. By making Katniss and Peeta the most sympathetic characters, the ones who capture readers' hearts, it's tempting to forget the cost of their victory -- until we see it etched in the emotional wounds of their hollow victory.
The Hunger Games is a challenging, thought-provoking thrill ride. A gripping, well-plotted novel that's nearly flawless in its execution, in its ability to draw you into its world, make you emotionally invested in the leads, and then make you question how you view this story, how many steps our own culture is from the world of the Games, because after all, haven't we been there before with Rome and her coliseum? Bring on the sequel!
Posted by Unknown at 6:06 PM

I liked this novel but the premise was also a bit... over-the-top extreme for my tastes. Still, contradictory or not, I already have book 2 and will be reading it. Unfortunately, I've read that the other books aren't as "good." We shall see. =)

So you liked it then? ;P

Have you seen the movie yet??

How much am I enjoying teaching this to my students right now? Oh, so much.

Would you mind if I steal your paragraph about The Hunger Games vs. our reality TV and news networks? It'll make a great writing assignment for my kids when they finish the book, or maybe on their mid-term exam.

Great review! :) When I saw you were reading this on Goodreads, I hoped you would write a review when you finished.

I just read the series for the first time back in September, but I finished rereading the first one last night (because I'm going to see the movie tomorrow! Can't wait).

This book was by far my favorite of the trilogy. The second one was awesome as well, and the third one was good, but a bit of a weak conclusion, in my opinion. :) But still worth reading!

@Amber S. - Thank you! Haven't seen the movie yet...wanted to finish the book & formulate some thoughts on it first. :)

@Jess - That is AWESOME. I am rather jealous of your students. And feel free to steal the paragraph, that makes me feel super smart at the thought it could be an exam prompt. ;) Haha!!

@Kristin - Thank you! I thoroughly enjoyed your review on GoodReads as well, my friend! Looking forward to the other two. :)

Great review! I loved the book and I loved the movie! I rarely go to the movies just because I figure I can swap for it on dvd or buy it when it comes out on Amazon for the price of a movie ticket but this movie I would pay to see AGAIN! I know it's nothing like Twilight but I feel like they did such a better job all around with this one. The actors, the storyline, the visuals, it was all very nicely done.

@Lauren S. - Thank you! Did you review this one on your blog?

@Renee - Thanks! I'm really looking forward to the film -- I've heard nothing but great things about it.