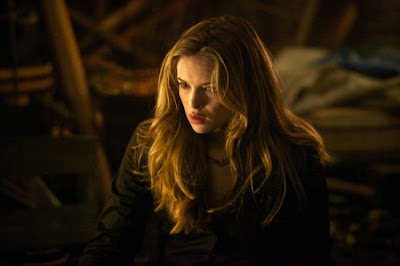 "Plumed Serpent" is one of my favorite Grimm episodes this season -- twisty and inventive and just plain cool. :) According to the official website, this episode takes its inspiration from the tale "The Two Brothers," about two young men seeking their fortunes -- and along the way one facing down a dragon. Personally I thought this hour felt a bit like a story of knights of old battling dragons to save their lady fair -- almost Arthurian in its sensibility.

This episode opens with two men breaking into an warehouse to steal copper. It looks like someone else has beaten them to the score, and they briefly consider moving on when they hear coughing. WHY THEY MOVE TOWARDS THE NOISE IS BEYOND ME, as the spray from the coughing (ewww) is IGNITED, torching the two thieves to basically nothingness. When Nick (David Giuntoli) and Hank (Russell Hornsby) arrive at the scene, it's clear there is some sort of wildly powerful accelerant in play, which, upon analysis, turns out to be a mixture of HUMAN FAT AND METHANE. (This show can be so twisty, I love it!) This brings up an interesting question about the show -- how long has Nick been on the Portland police force, and did super-strange things like this only start happening after he "inherited" his Grimm abilities from Marie? And is anyone wondering about this uptick in bizarre besides Renard (Sasha Roiz)? LOL!

When a witness to the break-in comes forward, they ID a horribly scarred homeless guy as the possible perpetrator. This is conveniently followed by news of another break-in at the warehouse, so of course Nick & Hank & company go to investigate. There they encounter the homeless guy who Nick sees transform into a scaly, incredibly cool-looking humanoid dragon, who then coughs up spit and ignites it, nearly TORCHING PORTLAND'S FINEST! Now I'm not entirely sure how the liquid fat sample they collect at the scene leads them to identify the man as Frank Eberhart (Don Alder), but whatevs. Interestingly enough Frank was a welder, who comes from a long line of men who used fire throwers in the military (I LOVE how this show incorporates the fantastical into real life, especially in a case like this that works so well because it makes so much sense). Nick discovers that Frank has a daughter, Ariel (Danielle Panabaker), who works at a club where it turns out she's a -- wait for it -- FIRE DANCER (is this actually a thing at clubs? just wondering...). 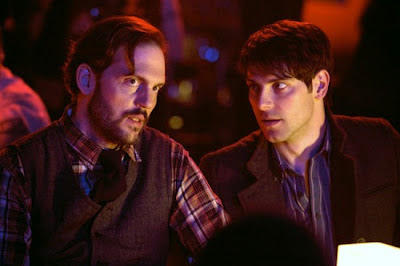 At the club Nick's surprised to see Monroe (Silas Weir Mitchell), looking particularly dashing in a vest and tie (!!) -- apparently Monroe does cut loose every once in a while, hmmm? *wink* During Ariel's performance she transforms into a dragon creature -- Monroe helpfully explains that they are actually Daemonfeuers, dragonlike creatures who convert their fat into flame (and also have a thing for copper). They are very much throwbacks to the old days of chivalry and quests -- which explains why Frank went off the rails years earlier, when his wife died in a fire and he failed to protect her. Ariel is apparently really turned on by the idea of meeting a Grimm, and claims she has no idea where her father is -- so Nick gets the bright idea of following her home, where she basically mauls him (including a kiss!!), and then causes all sorts of problems by answering Nick's phone and talking to Juliette (Bitsie Tulloch). (Side note: the set decoration for Ariel's house was FANTASTIC -- seriously everything from the sets to the costumes on this show are top-notch. Come Emmy time I hope this show gets some recognition for its visual work!)

Now this is where things get interesting -- the first time I watched this episode (the initial broadcast), I thought Ariel was first and foremost a stalker type, who went after Nick because he rebuffed her advances. But upon a second viewing, it was her determination to give her father a final grand battle that really hit me. The whole culture of this type of Wesen is really well-realized, I think -- death with honor, the great battle is valued more than hurting Nick just because he's a Grimm. I guess the bottom line is, it was a rather welcome surprise that it was these creatures who posed the greatest threat to Juliette since Nick's become a Grimm. One expects his personal life to be targeted because of Wesen animosity/distrust of Grimms, but in this episode Nick is forced into a fight because he's a useful, worthy opponent, not because he's hated for who he is -- make sense? 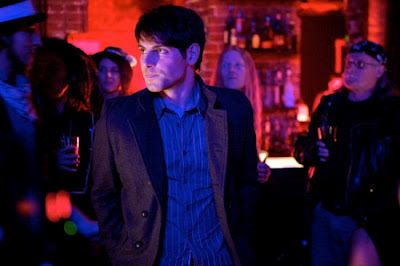 When Nick discovers that Juliette has been kidnapped, he turns desperate, and does what he always does -- turns to Monroe for help. At this point in the episode I'm thinking it is past time for Monroe to maybe take a self-defense class or something. I mean I know he's a Blutbad and all, but if he's going to be constantly running interference for Nick, a Grimm, with unhinged Wesen-types, well I just think he needs to be prepared. LOL! So the dragon's lair is basically an abandoned train tunnel, which is really pretty perfect because it is creepy as heck -- LOVE THIS EPISODE'S ATMOSPHERE. Things I also love: 1) Monroe geeking out about old train equipment, 2) Monroe giving the speech about the knight slaying the dragon being the old archetype of the whole relationship magilla, or something like that, 3) Monroe being HEROIC -- you see the theme here, right? ANYTHING TO DO WITH MONROE.

While Nick is taking out Ariel's CRAZY FATHER, Monroe frees Juliette -- and I cannot even begin to tell you how much I loved it when Juliette decked Ariel -- this girl's got game, LOL! Also, it is way past time that Monroe finally got to meet Juliette -- and seriously Nick, it is ridiculous that he had to put his LIFE ON THE LINE before he could meet your girlfriend. *rollseyes* Silly Grimm.

So the final explosion Ariel sets off leaves everyone thinking she's dead -- but I love the reveal at the end that she isn't. This lady is just unhinged enough to make things interesting -- and she definitely deserves an encore appearance (hopefully in season two!). This episode brings the potential stress and dangers of Nick's identity as a Grimm back into the spotlight -- and even though Juliette has no idea who her boyfriend really is, getting kidnapped is upsetting enough that she's starting to question if she can deal with Nick's job long-term. While the idea of a break-up is EXTREMELY UPSETTING, I have a feeling the show is headed towards a killer season one cliffhanger. And given the consistent uptick in overall episode quality over the course of this past year -- that is something I'm really looking forward to. :)
Posted by Unknown at 7:07 PM

We have a theory about Juliet. She's a Grimm too, only she hasn't been "activated" yet because her relative who his a Grimm is still alive somewhere.

I thought Ariel was a total stalker, too. This episode was so much fun!

@Lori - I LOVE THAT THEORY!