Review: Scandalized by a Scoundrel by Erin Knightley 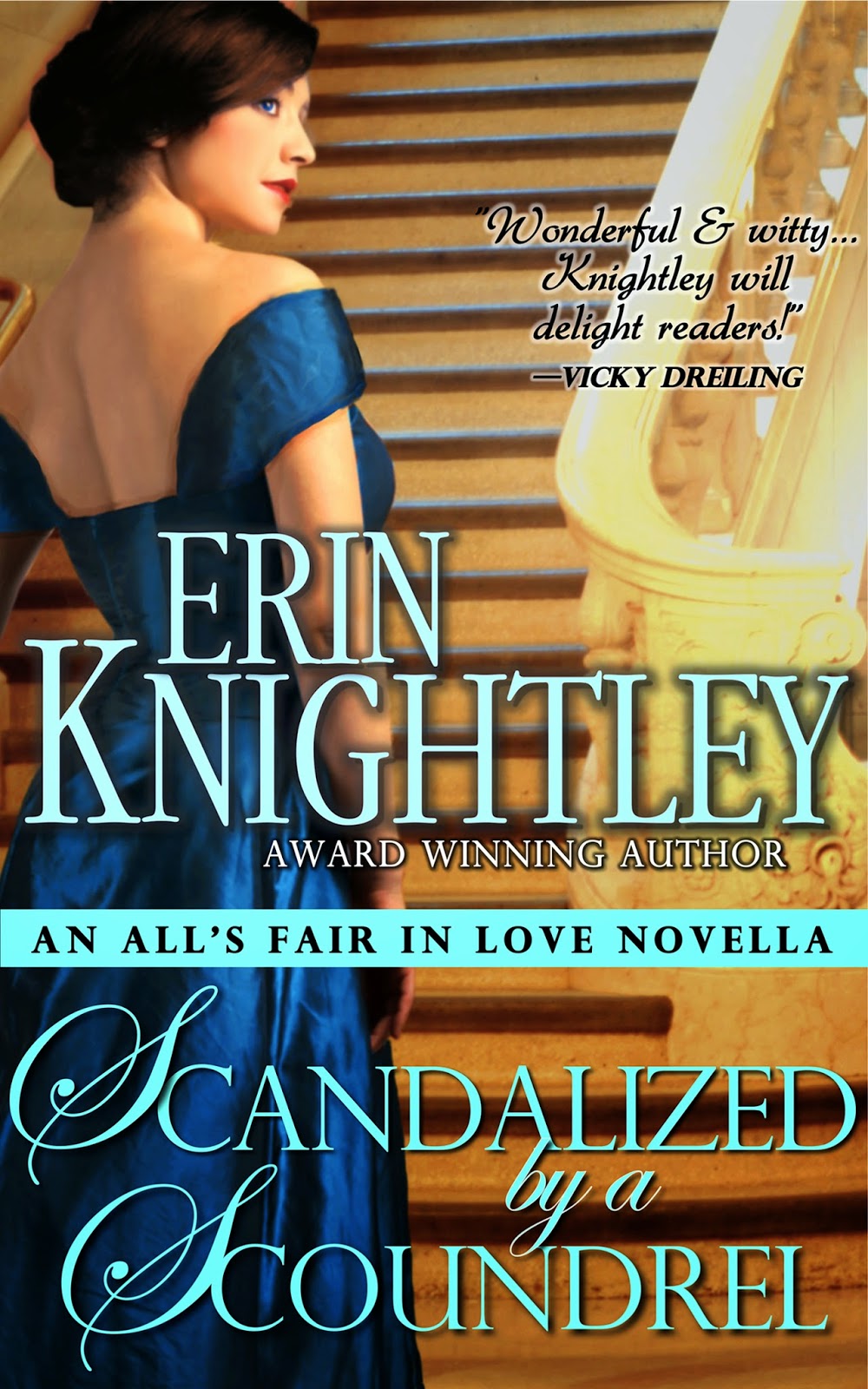 The third son of a titled Englishman and an American mother, Gabriel Winters has little reason to love his father's homeland or appreciate the privileges to which he is now entitled as the newly-minted heir. Ostracized his entire life for his American blood, Gabriel was never expected to inherit -- but when his two older half-brothers died, duty forced him to return to England and claim the title he never wanted. Following his friend Nicholas's wedding, Gabriel vows to return to America to choose a bride, determining that in this most personal of choices, the wishes of his blue-blooded extended family would be thwarted once and for all. But when he finds himself on the receiving end of Miss Amelia Watson's impressively wielded pistol, he finds all of his preconceived notions about well-born British females threatened by her spirit. When he discovers the secret hiding behind Amelia's bold demeanor, he offers his expertise -- lessons in hand-to-hand fighting techniques -- and friendship. But can a scoundrel with a chip on his shoulder ever hope to earn the trust of a wounded woman whose walls protect not only her secrets, but her family's honor?

After her mother's death at the hands of highwaymen when she was only thirteen, Amelia has spent years fighting to overcome the specter of fear brought into her life by that senseless act of violence. Losing her mother left her father crippled by anxiety, and Amelia saw her dreams of a future slip away as she made the transition from child to caregiver before she reached adulthood. Loathing the pity her family tragedy garners everywhere her story is known, at first Gabriel proves to be a refreshing antidote to her usual circle of acquaintance. Their sparring helps her to forget, however briefly, that she has too long been known as one marked by tragedy and consequently to be pitied for it.

Gabriel's unorthodox offer to teach her hand-to-hand fighting techniques first shocks and then intrigues Amelia, but she welcomes the chance to expand her personal arsenal of self-defense techniques. Gabriel hopes to assuage his guilt over judging her initial response to him, clinging to his plan to marry an American heiress, sure a feisty spinster could never compromise his well-laid plans. But as the lessons give way to the intimacy of close comradeship, sparks of a more dangerous, romantic sort begin to fly. When secrets are revealed, can these two wounded hearts seize a chance at a wholly unexpected love story?

After falling in love with Erin Knightley's writing in Ruined by a Rake, I immediately downloaded the next two novellas in the All's Fair in Love series, and I'm happy to report that this sequel does not disappoint! Picking up shortly after Nicholas and Eleanor's swoon-worthy romance, here Knightley sees them preparing for their wedding, moving the spotlight to a pair of the happy couple's unlikely - - but oh-so-perfectly matched -- friends. Knightley is fast proving to be a master of the novella format, delivering all of the humor, character and plot development (with the exception of Nicholas and Eleanor, who seem a little "bland" now that they are relegated to supporting players), and swoon-worthy romance that one craves in a full-length novel in a scant one hundred or so pages. These stories are refreshingly intense, fast reads, romances crafted with equal parts passion and restraint.

Amelia's relationship with her father is reminiscent of Austen's Emma and Mr. Woodhouse, though lacking a significant degree of that heroine's confidence. In eight short chapters, Knightley manages to sketch a convincing, nuanced portrait of a woman equal parts scarred by past trauma but craving independence and the strength to not be defined by her past. Through Gabriel's self-defense lessons, Amelia gains the confidence to emotionally thrive. And while the progression of her relationship with Gabriel may seem contrived, especially given the rules that governed proper social interaction between the sexes during the time period, Knightley presents the lessons with a restraint that lends their method of connecting with each other a genuine authenticity. This is a romance, yes -- but for every nod to the Darcy-esque, wounded hero tropes this is above all a story about inspiring the heroine to live life to the fullest.

With Scandalized by a Scoundrel, Knightly is fast becoming my go-to author for a sweet, swoon-worthy romance. Thus far, her stories have all the passion and humor one could want, and non of the spicier, envelope-pushing scenes found in other romances of this ilk that may deter some readers. This is such a refreshing read, not only in its development of the romance but in its treatment of fear. It is rushed due to the length restrictions of the novella format, but Amelia's journey from fear to empowerment is saturated with authentic hope. And isn't that, after all, part of the eternal draw of these tales -- the hope of acceptance and a safe haven at the end of a romantic journey.

In all his years in the army, Lord Gabriel Winters never once would have described an opponent as beautiful. But when he finds himself staring down the barrel of Miss Amelia Watson’s pistol, it’s the only word that comes to mind. Despite her clear distrust of him—and not to mention his own determination to avoid English women at all costs—Gabriel is more than intrigued by his friend’s bold neighbor.

Amelia has plenty of reasons to distrust strangers, and the broad-shouldered, devilishly handsome viscount deserves no exception. But when he challenges her to lay down her weapon and learn to fight in a new way, she finds herself capitulating. He may be a scoundrel, but he’s also the first person in years to look at her without the blasted pity she hates so much.

Though the lessons start out innocently enough, the heady pull of attraction soon gets in the way. They’re as incompatible as water and gunpowder, so why is she suddenly looking forward to the thought of being . . . Scandalized by a Scoundrel?
Posted by Unknown at 10:07 AM 1 comment:

GUYS!!!! There are a whole bunch of stills from this coming Sunday's episode of Once Upon a Time FRESHLY PINNED to my Once board (or Tumblr...or Twitter feed) and they are amazing and beautiful and totally WINNING THE WEEK for me so check them out if you're so inclined! Can't WAIT for Sunday!!
Posted by Unknown at 12:54 PM 4 comments: 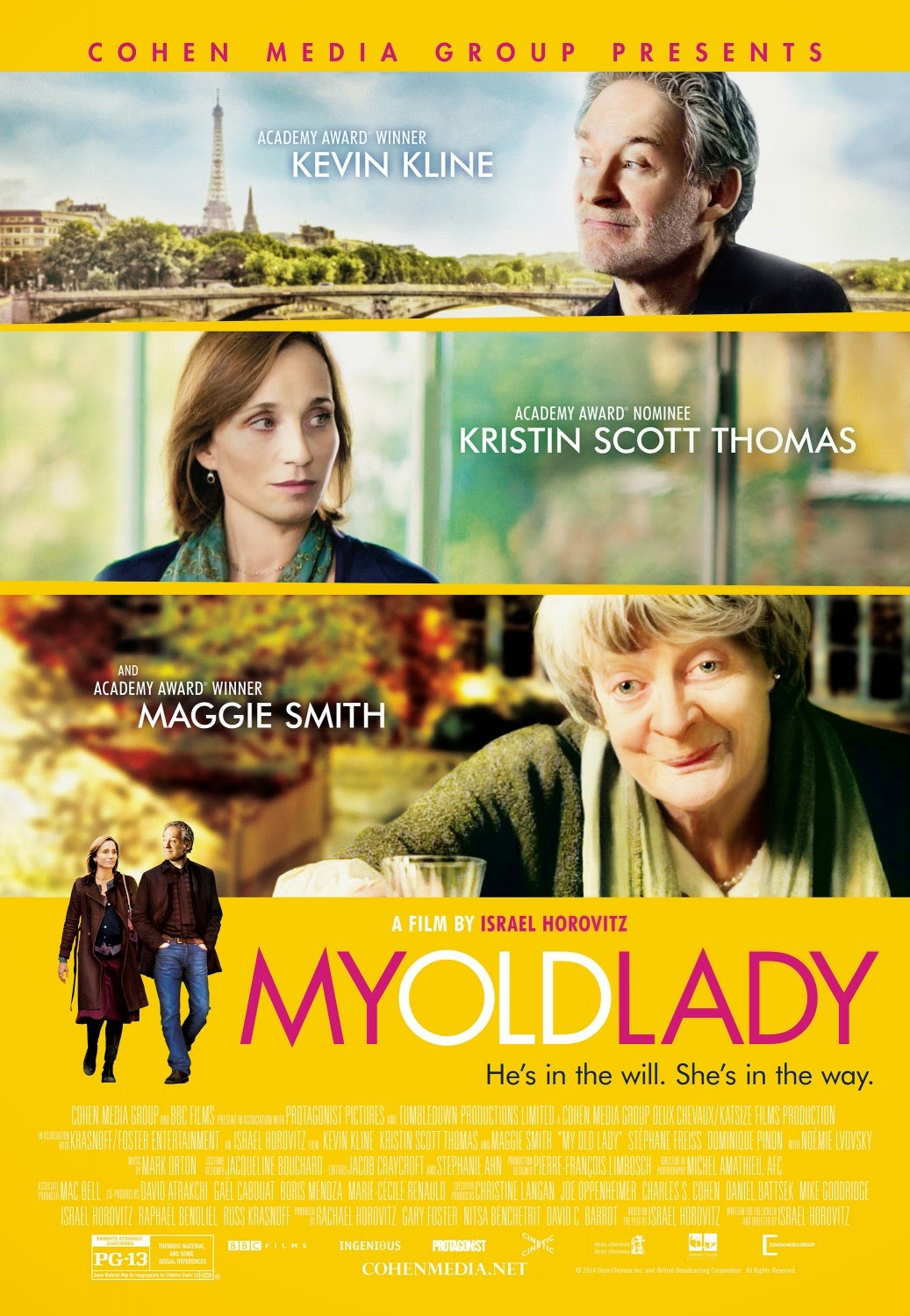 I've now seen the film My Old Lady twice (it is SO worth it!) and had the opportunity to review it for BreakPoint -- you can read my thoughts on the movie here. If you get the chance to see this gem, whether in theaters or whenever it releases on DVD (hopefully soon!), I hope you'll add it to your must-see lists...it is SO worth it. :)
Posted by Unknown at 4:48 PM 2 comments:

Posted by Unknown at 4:55 PM No comments:

So last week, this happened:

Lewis & Hathaway are BACK!

Remember those dark days when we all thought that Inspector Lewis was ending, never to return to our television screens? Well, my friends, that long dark night of my Lewis and Hathaway-loving soul is ending THIS WEEKEND! Sunday on Masterpiece, Lewis (Kevin Whately) and Hathaway (Laurence Fox) return for three BRAND-NEW episodes! Behold the amazing previews:

Oh my WORD I am SO EXCITED for this film!! New trailer debuted today:

Posted by Unknown at 7:29 AM No comments: