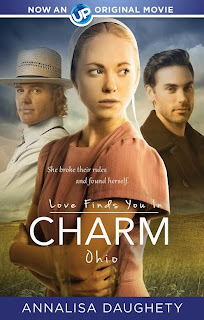 A YOUNG AMISH WOMAN MUST CHOOSE BETWEEN
TWO PATHS, TWO LOVES
IN THE ORIGINAL UP PREMIERE MOVIE

LOVE FINDS YOU IN CHARM

A FOLLOW-UP TO THE HIGHEST RATED UP PREMIERE MOVIE EVER:
“LOVE FINDS YOU IN SUGARCREEK”

Based on the Novel by Best-Selling Author Annalisa Daughety

ATLANTA – April 14, 2015 – Building on the success of last year’s UP original film Love Finds You in Sugarcreek, the original UP Premiere Movie Love Finds You In Charm (#LoveFindsYou) is a romantic drama about a beautiful, young Amish woman – seemingly with it all – who jumps at the chance to spend autumn in scenic Charm, Ohio with relatives and finds herself pulled between two worlds and two men.  The movie stars Trevor Donovan (Texas Rising, “90210”), Danielle Chuchran (Dr. Seuss’ The Cat in the Hat, UP’s Nowhere Safe), Drew Fuller (“Army Wives,” “Charmed”), Tiffany Dupont (“Greek,” “The Bedford Diaries”).  Love Finds You In Charm exclusively premieres on Sunday, June 7 at 7 p.m. EDT / 6 p.m. PDT.   This romance is the second in UP’s “Love Finds You” movie franchise.

Filmed in Charm and Sugarcreek, Ohio, the heart of Amish country, the movie was directed Terry Cunningham (UP’s Love Finds You In Sugarcreek, Jack Hunter and the Lost Treasure of Ugarit), and produced by George Shamieh and Mission Pictures in association with Guideposts.  Based on the popular novel by best-selling author Annalisa Daughety (“Walk in the Park” series, Wedding to Remember), the adapted screenplay was written by Bryar Freed-Golden (UP’s April 12th film The Music In Me, Paper Angels and Love Finds You In Sugarcreek).  The ensemble cast also includes Kaitlyn Sapp (UP’s Love Finds You In Sugarcreek), Dawn Lafferty (Reversal, Timequest), Kellen Boyle (Beautiful Sin, Chasing Death), Rohn Thomas (The Ides of March, The Mothman Prophecies) and newcomers Meg Wittman, Belle Fockler and Nick Petrus.  Features the original song, “Be Here,” performed by singer-songwriter Katie Herzig (whose music is frequently featured on “Grey’s Anatomy”) and written by Herzig, Seth Jones & Catt Gravitt.

Young Emma Miller (Danielle Chuchran) would appear to be lucky. This beautiful Amish girl has a loving family and the community’s most eligible young man, Jacob (Kellen Boyle), wants to marry her.  But she has more on her mind than buggies, bonnets and making her special goat cheese – Emma is secretly obsessed with Jane Austin’s Pride and Prejudice and restlessly longs for adventure and travel.  When given the opportunity to spend the season helping her widowed cousin Lydia (Meg Wittman) in scenic Charm, Ohio, Emma jumps at the chance. There she meets an Englischer, librarian Kelly Bennett (Tiffany Dupont), who has come to town to escape her chaotic life.  Despite their differences, the two become fast friends.  Settling into her cousin’s farm, Emma finds Noah (Trevor Donovan) – a striking, well-read, young Amish man who helps work the farm – intriguing, yet vexing.   So when Emma’s cheese attracts the attention of a local bed-and-breakfast and a handsome wine-and-cheese blog editor, Andy (Drew Fuller), she finds herself pulled between two worlds and two men.  Emma must decide whether to stay amongst the Amish, or leave behind everyone and everything she’s ever known to venture out into the world.

“Following up on the tremendous success of last year’s Love Finds You In Sugarcreek on UP, Love Finds You in Charm is a spectacularly shot romantic drama, filled with strong values as expressed through Amish traditions and faith," said Barbara Fisher, senior vice president of programming, UP.  “Actress Danielle Chuchran radiantly expresses Emma’s restless journey, and she has real chemistry on screen with romantic leads Trevor Donovan and Drew Fuller, who represent the two paths from which Emma has to choose.”

Author Annalisa Daughety (www.annalisadaughety.com) writes contemporary fiction set in historic locations. After graduating from Freed-Hardeman University, she spent time working as a park ranger for the National Park Service. This experience led her to write the Walk in the Park series – each book in the series is set in a different national park.  Annalisa has written several Love Finds You™ novels, including Love Finds You in Charm, Ohio, Love Finds You in Lancaster County, Pennsylvania and Love Finds You at Home for Christmas.  After 37 years of singlehood, she finally found her happily ever after in 2013.  She and her husband live in rural Arkansas and are learning the art of chicken and goat farming.

The “Love Finds You™” book series was launched in October 2008 by Guideposts imprint Summerside Press with the goal to give readers a taste of local life across America.  Each of the almost 60 novels to date – by revolving authors, including Daughety –  draws on the compelling history or unique character of a real place, such as Charm, Ohio.  Learn more at www.ShopGuideposts.org/love-finds-you.

Follow the cast and talent from the film at:
·         www.UPtv.com and www.lovefindsyouin.com and on Twitter @lovefindsyouinhttps://twitter.com/LoveFindsYouIn
TThe book is currently on sale for $1.99 across all e-book platforms! But as we all know I'm partial to Kindle. :)
Posted by Unknown at 11:45 AM 2 comments:

Oh my word, this looks amazing. So much better than I ever anticipated!! Can't wait!

Posted by Unknown at 4:43 PM No comments:

Email ThisBlogThis!Share to TwitterShare to FacebookShare to Pinterest
Labels: Supergirl

This made me laugh so hard. Enjoy! :)

Posted by Unknown at 7:51 AM No comments:

Email ThisBlogThis!Share to TwitterShare to FacebookShare to Pinterest
Labels: Cats, The Avengers 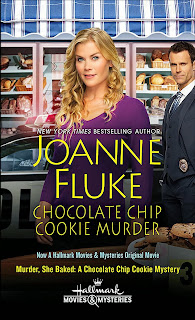 Hannah Swenson divides her time between running The Cookie Jar, sleepy Lake Eden's popular cookie-centric bakery, and dodging her mother's attempts to see her (finally) married off. Her quiet life is upended when Ron LaSalle, The Cookie Jar's dairy deliveryman and local football hero is found murdered behind her shop. Thanks to the proximity of the crime and with her cookies scattered all over the crime scene, Hannah feels a personal responsibility to see the perpetrator brought to justice. Her amateur investigative efforts uncovers a web of unexpected secrets hiding beneath Lake Eden's sleepy veneer of respectability. And one wrong question could see this cookie-loving connoisseur slip dangerously out of her depth.

After watching the recent Hallmark adaptation of this novel I was inspired to check out the source material. Fluke's first installment in her long-running bakery-themed series is an appealing confection of sweet desserts peppered with a dash of murder. This is a classic cozy -- small town setting, quirky cast of characters, mouth-watering food, and a dash of the mysterious. Hannah is an appealing heroine, equally at home within the tropes of a lite mystery or that of a single woman's dating travails. I love the fact that she's a (for the most part) smart, independent businesswoman who also happens to love chocolate and her cat and is fairly content in her single status (though of course open to change, preferably not engineered by her meddling mother).

I'm a bit torn as to how to rate this book, because I feel my enjoyment of it was hampered by knowing the eventual outcome from the film -- the flip side being that I would have never picked this book up had I not seen the movie (and there are at least four cookie recipes in here that I'm dying to try!). The road to discovering the identity of the killer menacing Lake Eden is a circuitous, rather predictable one. A cozy mystery isn't supposed to drag, but the pacing felt off and the investigative rabbit trails Hannah follows began to wear thin and have me questioning her alleged smarts by the novel's final act. That said, I loved seeing Hannah's relationship with her polar-opposite sister develop and strengthen over the course of the novel. I also appreciated how Fluke touched on subjects of domestic abuse with the frankness and sensitivity such material warrants while staying true to the overall lighter tone of the book.

This is a cute, fast read, though more skimmable and less engaging than I'd hoped. That said, contemporary cozy mysteries are somewhat outside my reading norm, and I can see the appeal of the conceit Fluke has captured within these pages -- spunky heroine + sweets + mystery = endless possibilities, much like the recipes Hannah loves to develop for her shop. There is the promise of romantic possibilities here, as the local dentist and the new detective compete for Hannah's affections (right now I'm pulling for the detective, but with eighteen books and counting in this series I have little hope that triangle is anywhere close to a resolution), and the day-to-day workings of her business provide an enjoyable -- dare I say tasty -- framework to the series. This isn't a world I'll revisit any time soon, but the next time I'm in the mood for some fluffy, sugary-inspired escapism, I'll keep Hannah's further adventures in mind.

Take one amateur sleuth. Mix in some eccentric Minnesota locals. Add a generous dollop of crackling suspense, and you've got the recipe for this delicious new mystery series featuring Hannah Swensen, the red-haired, cookie-baking heroine whose gingersnaps are almost as tart as her mouth and whose penchant for solving crime is definitely stirring things up.

Hannah already has her hands full trying to dodge her mother's attempts to marry her off while running The Cookie Jar, Lake Eden's most popular bakery. But once Ron LaSalle, the beloved delivery man from the Cozy Cow Dairy, is found murdered behind her bakery with Hannah's famous Chocolate Chip Crunchies scattered around him, her life just can't get any worse. Determined not to let her cookies get a bad reputation, she sets out to track down a killer. But if she doesn't watch her back, Hannah's sweet life may get burned to a crisp.
Posted by Unknown at 6:37 PM No comments: