Review: In the Arms of Immortals by Ginger Garrett 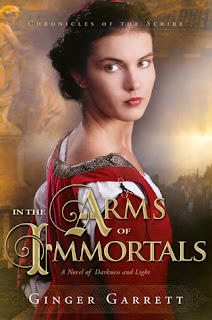 
"The time of the angels is over. The age of fear has begun."

Sicily, 1347. It starts with a strange ship in the village harbor. That night an old man falls ill...then the baker's wife...then a street urchin. By morning half the townspeople are dead and more are dying -- horribly. Civic order breaks down. Wolves move in from the countryside. And no one has a clue what is happening or how to stop it. Not the local priest. Not the rich baron. Not the baron's proud daughter, nor the powerful knight who loves her. Certainly not the outcast healer whom many call a witch.

Only the Destroyer and the unseen Watchers know the real story...along with an unwilling visitor from another time. Mariskka recognizes the Black Death that will soon decimate Europe. But she has no voice to speak, no way to help...until she dares open her pain-hardened heart to the unfathomable truth.

Richly imagined, tautly suspenseful, and deeply moving...another heart-stopping historical thriller from the author of In the Shadow of Lions.

It has been far too long since I've lost myself in the pages of a Ginger Garrett novel. In the Arms of Immortals is Garrett's second novel that examines critical turning points in medieval history that changed women's lives forever. In the Shadow of Lions touched on the untold story of Anne Boleyn's faith, and her role in making the scriptures available in an English translation, threatening the religious establishment and allowing individuals to discover and grapple with the tenets of their faith without relying on the church as an intermediary. Immortals takes readers back to 14th-century Sicily, a time when women were granted no voice in the church and introduces Gio, an outcast healer wounded and misunderstood by the very institution that should have heard and protected her, and Panthea, a spoiled baron's daughter whose secret struggles threaten her very soul. When plague arrives in Sicily, and illness which brings a horror and devastation the like of which has never been seen before, Gio and Panthea are faced with a choice -- how do you live when there's no answer to the whys, when God seems silent, and devastation rains down on saint and sinner alike?

Garrett retains the modern-day framing device used in her previous standalone Scribe novel, that of an unsaved woman being given a reprieve through an angelic Scribe's story. Mariskka, briefly introduced in the first novel, is thrust back in time to witness the story that could change her life, but she is powerless to speak once she finds herself in 1347 Sicily, knowing it lies on the precipice of ruin thanks to the coming plague. Mariskka's awakening is woven throughout Gio and Panthea's stories, the latter two women from vastly different backgrounds who unexpectedly find themselves drawn together at the worst time in their city's history, faced with the same choice -- believe a lie, or reach for grace?

Both Gio and Panthea are fascinating studies in the roles of women in the fourteenth-century -- how they were perceived, the roles they were expected to fill, and the cost of testing societal boundaries. Gio, once an innocent, told a lie to save her virtue, a decision that costs her dearly, seeing her shunned by the very one who could have helped her most. Panthea's struggles are more subtle, since as a daughter of privilege she's wanted for nothing, so the threat of her destruction stems from a most insidious enemy -- one's thoughts. Garrett's characterizations are absolute gems, her poetic prose bringing to vastly different but equally passionate women to life on the cusp of one of history's greatest tragedies. These are deeply flawed, realistic women whose respective journeys will break your heart and challenge your faith. Through them Garrett confronts perhaps the greatest lie that has attacked women since the dawn of time -- the lie that we're not enough, good enough, pure enough, capable enough with the reality that a merciful, loving God calls us more than conquerors, if we but accept His freely proffered gift of grace.

Garrett is such a refreshing voice in the inspirational fiction market. Immortals features her lyrical prose, a fast-paced, impeccably-plotted storyline, the trademark way she blurs the line between the physical and spiritual realms, resulting in a page-turning, wholly absorbing read. Her passion for speaking to the role of women in history -- particularly as relates to the unsung heroines of the Christian faith -- is a powerful reminder of the legacy of blood and tears and sacrifice on which my own faith rests. Gio's experience in particular is a masterful examination of the age-old question, "why does God allow suffering?", compassionately daring to suggest that instead we should be asking how shall we live? how shall we choose to exercise our faith in a fallen, messed-up world? This is thought-provoking, challenging, inspiring fiction at its finest.
Posted by Unknown at 1:31 PM

You have no idea of the power you wield. I bought this book today. I've never read Ginger Garrett.

@Lori - Oh my friend you are too sweet! Thank you! I am so excited for you, embarking on your first Garrett novel -- I just savor her books! Keeping my fingers crossed that you enjoy her writing -- I can't wait to hear what you think!