Once Upon a Time 1.13: "What Happened to Frederick" 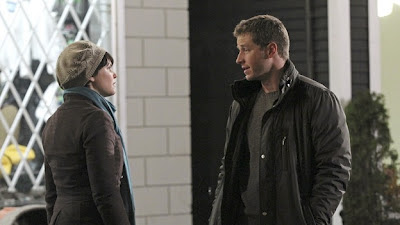 This was an interesting episode of Once Upon a Time because it finally gave me a reason to see Kathryn as more than the Storybrooke curse's annoying obstacle to David and Mary Margaret's long-term happiness. From the moment we were first introduced to Midas's daughter Abigail (Anastasia Griffith) in Fairy Tale Land, I took an instant dislike to her -- she was so, so very cold. Turns out there's a reason for that, hmm? :) This episode opens shortly after Charming (Josh Dallas) has ditched his forced engagement to Abigail and is on the run from his faux-father (Alan Dale), in search of Snow White. First of all, WHY ON EARTH is Charming wearing a scarf/shawl/table cloth around his neck? Is this supposed to be a disguise? I mean REALLY??? Lame. Ditch the plush cloak first. :P I don't need Charming trying (and failing) to wear shawls and thus distracting from his FTL awesomeness. That aside, there's lots of Charming on horseback here which is always a win until he's trapped by random soldiers who, it turns out, work for Abigail. News flash: SHE DOESN'T WANT TO MARRY YOU. Like, AT ALL. Yay!
This is obviously a huge relief for Charming since it removes the biggest obstacle to his happiness with Snow (except for the whole her claiming not to love him to save him thing). Of course he has to know WHY she wants to help him escape his crazy fake father (he is a guy, after all *wink*), and Abigail explains that she hopes by helping him find happiness with his one true love that she can gain some consolation from having lost hers. She was in love with a knight named Frederick who was turned to GOLD while defending her father (we all knew this was going to be a problem when Midas was introduced, right?). Charming's all like LET ME FIX THIS because he is so RELIEVED she doesn't want to marry him, and she's all well if you get me this magic water Freddy will return to me, but there's a problem -- you have to get past the Lady of the Lake and she LIKES TO KILL PEOPLE (the L of the L of Arthurian legend fame is rolling over in her watery grave). Anyways, this is awesome because if you're like me you instinctively realize that Charming is GOOD AT QUESTING -- 1) he looks good on a horse 2) he can wield a sword and 3) I MELT INTO A PUDDLE OF GOO every time he looks at Snow. WIN.
Back in Storybrooke, David is still slogging through his marriage to Kathryn AND carryong on with Mary Margaret (Ginnifer Goodwin) on the side because apparently the curse made him all wishy-washy and he lost his ability to be DECISIVE. *sigh* Mary Margaret upps the pressure to come clean about the whole thing so everyone can move on with their lives, and that he has to make a choice -- David agrees because little does Mary know, Kathryn wants him to move to Boston with her so they can try the whole fresh start in a new town thing. OH THE PRESSURE. At the last minute poor David caves, and only tells Kathryn he won't leave with her and they just "can't connect." She's devastated because she's forgotten the whole Freddy factor, and goes running to her B.F.F. (little does she know) Regina (Lana Parrilla), who spills the beans about David's affair with Mary Margaret (of course it is ALL Mary's fault, like David had nothing to do with it *sigh*). 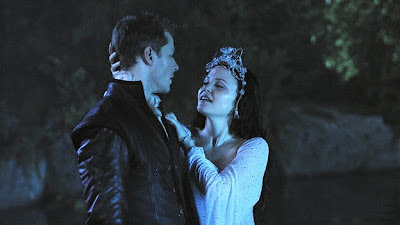 Back in FTL, Charming meets the infamous Lady of the Lake/Siren (Aria Pullman), and boy does she have him pegged -- promising she can be his true love, and transforming into Snow White. The ruse almost works -- but I guess the whole point of this excerise to drive home the point that Charming can recognize true love because he's experienced it with Snow -- and NO FAKES are going to cut it. This guy has it in him to go the distance -- I need to remember that when I want to smack some sense into his Storybrooke self. So witchy siren tries to kill him, and he stabs her, and it's all very exciting and I'm thinking "ooohh, UNDERWATER SCENES...wonder what they are gonna do when Ariel is introduced?" Needless to say Charming's water works on Freddy, and Abigail is ecstatic -- so we know she has a happy ending out there somewhere (if E.Queen doesn't CRUSH IT first!).
Back in Storybrooke Kathryn goes postal all over Mary Margaret for breaking up her miserable marriage, and Mary is devasted when she realizes that David didn't have the guts to tell Kathryn the truth about why he wants to leave her. Once Kathryn cools down, though, she starts to flex her own muscles against the curse, realizing that she wants to be loved for herself because clearly, CLEARLY David is over the moon for Mary Margaret (girl, I HEAR you...the LOOKS he gives her kill me too). She leaves him a letter setting him free and resolves to go to Boston to attend law school and OF COURSE SHE HAS TO TELL HER ONLY FRIEND REGINA EVERTHING. *sigh* Regina of course burns said letter (probably muttering curses all the while -- and how creepy were her skull keys to every house in Storybrooke?!), so we know this is not going to end well, right... *double sigh* 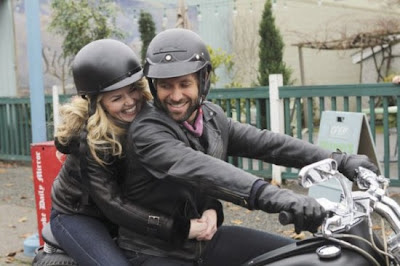 Meanwhile things are finally starting to get really interesting as far as The Stranger (Eion Bailey) is concerned. First of all, his real name is August W. Booth. AUGUST. I love that. He finagles an agreement to take Emma (Jennifer Morrison) for a drink, which is not at ALL what you expect -- he takes her to a WISHING WELL where he gives her this whole speech about the water being magical and if you drink it something lost will be found (EEEP!!! So many possibilities!). When he's not flirting with Emma (I LOVE THEIR SCENES by the way) he's rebinding Henry's missing book -- and after this episode aired it was confirmed that he's adding pages. This seems to support my theory that he's the book's author -- but I've also been wondering, do you think it's possible he could be Rumple's missing son? Just throwing that out there (mainly because I want more Mr. Gold-centric storylines!). :)
Conveniently enough Emma discovers Henry's freshly rebound book shortly after her "date" with August -- and Henry (Jared Gilmore) is thrilled to have it returned to him. (Side note: I died inside a little when Regina gave him a friggin' VIDEO GAME as a replacement for his book, ergh!! This kid is a born reader if ever there was one!) I cannot wait to see how the show peels back the layers of August's character and his true purpose in Storybrooke -- the slow pace is maddening but the sparks between him & Emma, oh it makes the wait worthwhile. :)
ANYWAYS...wrapping things up here...poor Mary Margaret has been branded the town tramp. And seriously I love how everyone is giving her the cold shoulder and David seems strangely ignored. But whatevs...she finds David trying to remove graffitti from her car and rips him over the coals for not being forthright as he'd promised with Kathryn. This is yet another opportunity for Dallas to EMOTE and he does it so well -- and when Mary Margaret tells him they have no future together he cries. HE CRIES, PEOPLE! I seriously can barely handle it. *sobs*
BUT THERE'S HOPE, because back in FTL Charming is back on his horse, riding through the woods, yelling his head off for Snow. THIS IS COMMITMENT, PEOPLE. He runs into Red (Meghan Ory) who drops the surprise that she refused him to save his life, and he gives the whole "I'll find her, I'll ALWAYS FIND HER" speech which is so cliched but oh so INSPIRING when it's said with conviction like Dallas lends the lines. Excuse me while I swoon. :)
Back in Storybrooke, the episode ends with the high school gym teacher (Greyston Holt) discovering Kathryn's car...probably drawn there because he looks a heckuvalot like Freddy the former Gold Knight. Question: do we think Kathryn is dead, or has Regina spirited her off to some hidden prison? We're only on episode 13 of season one, personally I don't think we need to start killing characters off willy-nilly. Thoughts?
BONUS PICTURE OF CHARMING QUESTING: 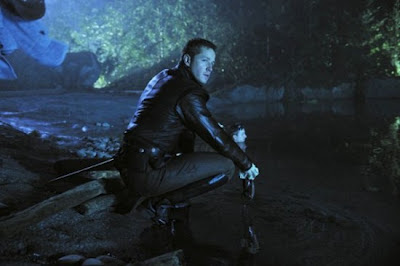 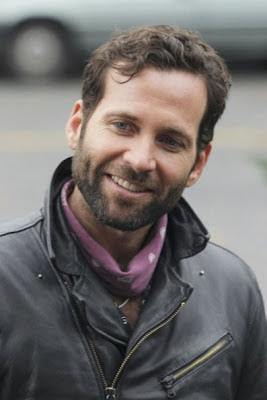 First . . . as soon as Kathryn ran into the gym teacher in the hallway at the school when she went to confront MM, I immediately tweeted that he was going to turn out to be Frederick, and I was right--I've got this show's number!

Second . . . I think Regina has Kathryn stowed away in the same place she has Belle stowed away---in the basement of the hospital.

I love this show!!! I definitely like Kathryn better in the fairy tale version of her life. Which has been your favorite episode so far?

@Kaye - It's fun to play the guessing game, isn't it? :) Also...hope you're right about Kathryn...I'd hate for her to get knocked off now that I sort of finally like her. :P

@Svea - Me too! I think my all time favorite episode thus far has been "Skin Deep," the Beauty & the Beast themed episode (see post from a bit earlier this week).

I'm rewatching the show with friends, and thought it was so cool that the phrase "what happened to Frederick" was used in episode six. I don't think Kathryn's dead - the show would probably have more with Frederick in Maine before that happens (the show's writers are far too mean to get rid of Kathryn until it would cause the most angst).

I loved this episode, mostly because like you, it did give me a reason to like Kathryn. I really enjoy her storyline now....now that we know her FairyTale Land counterpoint doesn't want Prince Charming.

And I am like you on those three counts. Josh Dallas turns me to goo. Thank goodness I watch it by myself.

August is either the writer of the book or Rumple's son. I can't decide which.....but those seem the most likely.

And I heard Ariel will be something done in SEASON 2!!!!

@Katie - Are you kidding me, that phrase is in episode six? I'm gonna have to rewatch!

@Ella - Ohmygosh, wouldn't it be SO AWESOME if August was Rumple's son? EEEEKKK!!! I can't wait to find out!!!

@Ruth Yeah, it was right at the beginning, when the attendant went to take off Midas's glove (before he turn the first Prince's sword to gold).

It would be cool if August was Rumpel's son, but I hope they would find a way to explain the time thing, especially due to "That Still Small Voice" - Rumpel was already all evil and powerful when Geppetto was a kid, so Rumpel's son would be older than him. So he would have to be frozen in time for 50 some years, in addition to the 28 everyone else was, to be the age he appears to be. Plus they have to explain why he wasn't stuck in Storybrooke either.

You girls still have me looking forward to this one. ;D

@Katie - Believe it or not I remember that, now that you mention it. Great follow through for the show!

Here's the thing...it wouldn't have to make perfect sense to work for me...but I see where you're coming from. Kaye shared a theory she read online that apparently August might be Pinocchio, or so some people think? That is an interesting possibility too!