Review: The Lady of Bolton Hill by Elizabeth Camden 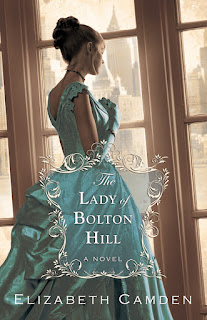 The Lady of Bolton Hill
By: Elizabeth Camden
Publisher: Bethany House
ISBN: 978-0-7642-0894-2
About the book:
When Clara Endicott and Daniel Tremain's worlds collide after twelve years apart, the spark that was once between them immediately reignites into a romance neither of them thought possible.
But time has changed them both.
Daniel is an industrial titan with powerful enemies. Clara is an idealistic journalist determined to defend underprivileged workers.
Can they withstand the cost of their convictions while their hearts -- and lives -- hang in the balance?
Review:
United by a passion for music, Clara Endicott and Daniel Tremain were the best of friends despite their wildly disparate backgrounds. Clara, the daughter of an influential minister, is a glittering but refreshingly unpretentious child of Baltimore's elite, while Daniel is a native of the tenements, destined for a future in the steel mills but with a drive to escape his upbringing and prove worthy Clara's affection. After a tragic accident derails his youthful dreams, Clara is shipped to England with the hope of discovering her passion and purpose in life, leaving Daniel to transform his family's tragedy into a springboard for advancement, marrying his thirst for vengeance with the drive to exceed his antecedents and prove worthy Clara's world. While in England Clara discovers her passion -- illuminating the darkest struggles of the working classes with the power of her pen -- and when her expose see her unceremoniously sent back to America, she and Daniel are reunited. After more than a decade apart, Daniel and Clara couldn't be more different -- but the connection and passion that simmered between them as teens remains unchanged, flaring to life once again after their first encounter. But as much as Clara would love to rekindle her relationship with her oldest friend, Daniel's stubborn, unrelenting obsession with revenge no matter the cost threatens to derail her most cherished hope. While Clara's passion for justice collides with Daniel's pride, an unseen enemy emerges, ready to strike. Can Daniel relinquish his hunger for revenge before he loses his truest friend, or will the hope of a future with Clara be ripped from his grasp forever?
Perhaps the best way to describe Camden's debut effort is intense. From the heady days of Clara and Daniel's early friendship to Clara's unceremonious deportation from England, Camden hits the ground running from the novel's opening pages. I loved the fact that Clara and Daniel's romance grew out of a childhood friendship. The intensity of their relationship, the way in which they "click" lends their budding romance an intensity and spark rarely seen in fiction of this ilk. Daniel is very much a hero cut from the same cloth as Darcy and Thornton of classic literature fame. Speaking of Thornton, this novel bears a striking resemblance in subject matter and romance to Elizabeth Gaskell's North and South. Much like the mill owner John Thornton, Daniel rises to society's highest levels with a hard-edged grace, consumed with validating his newly-acquired position. And like Thornton, Daniel meets his match in the form of a social-justice minded, independent and unconventional woman who refuses to surrender to a love built on a foundation of vengeance and anger.
Bolton Hill's greatest strength lies in its insistence on pushing the boundaries of historical romance -- this is a novel infused with heated romance, weighty social issues, and high adventure. And therein also lies the novel's biggest weakness. Clocking in at a relatively slim 320-odd pages, there's almost too much going on to do any of the multiple, and equally potentially strong, storylines the justice they deserve. Roughly half the novel focuses on everything from the challenges facing female journalists in the Gilded Age and workers' rights, labor riots, and industrial rivalry while the second half features an expansive opium smuggling operation headed by a sinister Professor Moriarty-type figure whose brilliant, teen-aged lieutenant (think a 19th-century James Bond type) has Daniel's downfall in his sights. Camden has a appealing voice and intelligent, articulate prose that kept me rapidly turning pages. And while I appreciate the novel's reach it simply isn't long enough to do full justice to its characters or the multiple storylines.
Don't let Bolton Hill's gorgeously-rendered cover fool you -- yes, there's a romance (and oh, some of the moments Daniel & Clara share!), but there's adventure, danger, and an organic spiritual thread wrapped up in the pages of Camden's debut. In particular I liked the character of Daniel -- his strength, intensity, loyalty to his family, and whole-hearted adoration of Clara, though his spiritual arc felt a bit truncated (again, due to length limitations). With the promise of a tighter storyline, Camden's crisp prose and fearlessly fast pace mark her as an author to watch. And that teen-aged, villainous protege I mentioned earlier? He makes a most welcome return later this year in Camden's third novel, Against the Tide.
Posted by Unknown at 5:52 PM

I thought this novel had room for improvement but I found it so charming that I sped through its pages in record time. =)

@Tasha - It was fun! Looking forwrad to her next one!

Not yet - I have it sitting in my room, and am looking forward to reading it as soon as I finish reading a certian book-turned-movie that has everyone in a tizzy of excitement. ;D

This one actually somewhat reminded me of "N&S." Only it was less... "complicated."

@Rissi - Oh I think I know what you might be talking about there... :)