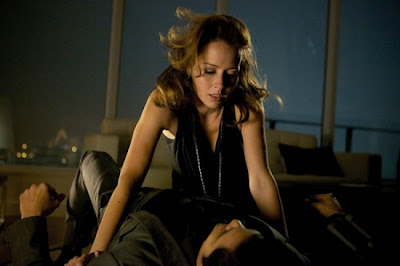 "Tarantella" is at once the grossest, most disgusting yet simultaneously tragic and heart-breaking episode of Grimm thus far. This episode takes its inspiration from a Japanese short story entitled "The Goblin Spider," where apparently normal-looking spiders morphed into hideous, larger versions of themselves capable of horrific acts. The Grimm version of these Goblin Spiders are called Spinnetods, or Black Widows of the Wesen (creature) world. Spinnetods are female, plagued by a condition that causes rapid aging unless they literally suck the life out of three young men every five years. The tragic thing about these undeniable predators is that they are haunted by self-loathing -- they don't want to kill, but when the choice comes down to kill or rapidly age & die, well that is no choice at all. Talk about depressing!

The Spinnetod in question is played by guest star Amy Acker, which got a lot of Joss Whedon fans excited since she appeared on both Angel and Dollhouse (I never watched either, so all I can say is that I had a general impression of her as likeable). The episode opens with Amy's character, Lena, meeting a Fuchsbau (fox-like creature) on the prowl at a swanky art show. They flirt, she plays coy, he insists, and they end up back at his apartment. Apparently rethinking her decision, she tries to leave and is attacked -- quickly, and shockingly, turning the tables on the leech and transforming into a disgusting-looking spider woman, forcing him to swallow some sort of venom she's spitting up (but not before he bites off one of her fingers). If you can get past the gross factor, the set up here is pretty brilliant -- nothing about Lena's appearance or demeanor screams deadly predator, and her obvious horror and remorse in the aftermath of the killing immediately suggest that what she's just done is beyond her control -- the only question that remains is why?

Nick (David Giuntoli) and Hank (Russell Hornsby) are understandably puzzled by how a killer can essentially suck his or her victims completely dry, leaving them in a dessicated state that suggests they've been dead for months or years rather then a matter of hours. When the coroner reveals that the corrosive contains spider venom, I just have to say I think it took Nick a little longer than it should have to hit the Grimm books looking for a culprit. Really that should be his default reaction by now. :P Anyways, Lena's killed again, suggesting she's a cold-blooded predator -- but what about the earlier tears? When a match is returned on the finger found at the first crime scene, Nick and Hank realize they have some sort of ritualistic killer on their hands -- the print matches one taken at crime scenes five and ten years prior, crimes that occurred in clusters of three. Cut to Lena once again, and just when we think she's marked her third would-be victim, we discover that she's flirting with her husband at their daughter's soccer game. This dichotomy, Lena's obvious desire to appear small and normal and unobtrusive, it's completely at odds with her earlier more brazen, flirtatious behavior. 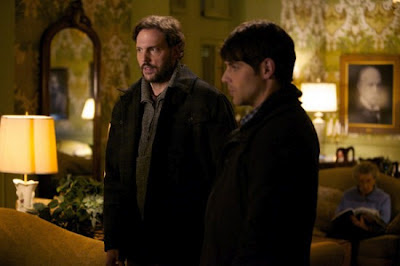 When Nick discovers an ancient scroll in Grimm HQ (a.k.a. Aunt Marie's trailer) talking about deadly "spider women," he of course turns to Monroe (Silas Weir Mitchell) for more information (because OF COURSE asking a blutbad about spiders makes PERFECT sense *wink*). So OF COURSE Monroe is friends with Charlotte (Dalene Young), an elderly Spinnetod living in the local Wesen nursing home. 1) How hilarious is the idea of Wesen long-term care facilities? 2) How adorable is it that Monroe visits old spider ladies in nursing homes? I mean SERIOUSLY! Could he be more perfect?? ANYWAYS...Charlotte brings Nick face-to-face with the cost of turning one's back on the Spinnetod lifestyle -- she's actually 26 years old but looks 70 plus at best. The moment when she "jokes" about Monroe and Nick looking tasty -- the looks they exchange are priceless.
So, we cut back to Lena, who has given her husband Robert (Ryan McCluskey) the Rolex she took as a "trophy" of her first kill in this episode. Their daughter Sally (Nicole McCullough) is all "OOOH!!! SHINY!!!" and takes the watch to school to trade for a bike (weird?!?), which gets back to Nick and Hank, who take Robert in for questioning. Nick is immediately suspicious of Lena's bandaged hand, but apparently spider women can grow back minor appendages AT WILL! Who knew?! But Nick doesn't give up becaues HE'S A GRIMM, DANGIT, and pressures Robert to flip on his wife -- because it makes no sense if Lena is a Spinnetod that she could have a long marriage. And this is where their story gets MORE tragic, because they are so obviously in love with each other, yet Lena has to commit these horrible crimes in order to slow her aging process and stay with her family. Talk about a Catch-22... 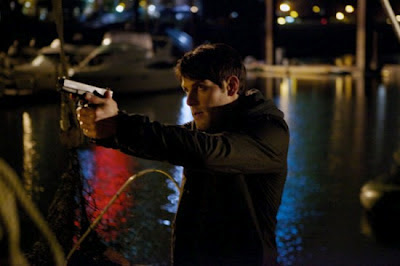 The climax of this episode, with Nick and Hank attempting to prevent Lena from committing a third murder, is actually one of the more suspenseful sequences the show has featured. Nick's hunt for Lena on the eerie marina made me jump more than once. And I loved how Nick really seemed to struggle with shooting Lena -- she needed to be stopped, but Giuntoli played it in such a way as to hint at Nick's acknowledgement that on some level, Lena couldn't help who she was. This seems to make Aunt Marie's injunction to "hunt down the bad ones" that much harder -- because how do you deal with the bad ones who don't want to be bad? And even more than that, what do you do when you know there's a murderer in the making (Lena's teenage daughter), but since she hasn't done anything yet, you just have to wait for her to act first? Talk about a burden, yeesh. So Lena meets her inevitable fate in jail, rapidly aging and crying over her lost family -- it's AWFUL. I mean we shouldn't feel sorry for her but we DO because she looks like Amy Acker who is SO DANG LIKEABLE.
This episode also featured a potentially disturbing development on the homefront for Nick as far as his relationship with Juliette (Bitsie Tulloch) is concerned. Wesen children have taken to egging his house, which gets Nick concerned about his unwanted notoreity (side note: Nick & Monroe hanging out for coffee? WIN). So Nick has to Grimm-it-up if you will and instill a little healthy fear of repercussions in the Wesens spreading the news about his Grimm-status -- in this case the culprit is that pesky refrigerator repairman who got all whigged out when he realized who Nick was. It's been coming at a bit of a slow burn all season, but Nick is really stepping up in the Grimm department, becoming more proactive without (thus far, anyway) letting his "powers" go to his head. All in all, a very solid episode, though the deaths-by-corrisive-spider-acid were a bit gross. And shout-out to Captain Renard (Sasha Roiz) for continuing to look friggin' awesome in nice suits. Makes me happy. :)
Posted by Unknown at 3:17 PM

Love Amy Acker. She was on Dollhouse, Supernatural, Angel, even Once Upon a Time. I liked this episode for her alone. =)

@Charity - Oh I loved her appearance on Once. She seems super nice. :)

I screamed EWWW so many times during this episode. Loved it!