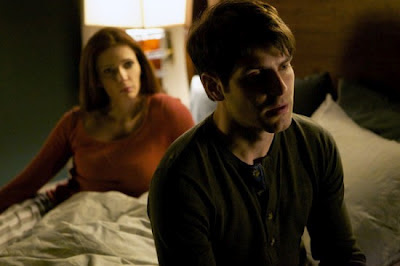 "Three Coins in a Fuchsbau" was an interesting Grimm episode in that it sought to (finally) give some historical context to the idea of Grimms and allowed a deeper glimpse into Nick's own history. The episode takes its inspiration from a story called "The Master Thief," though I would argue that the script's relation to the fairy tale (originally Norwegian, apparently) is slim at best. The episode opens with three shady-looking eastern European types prepping for what turns out to be a jewelry heist (the Wesen version of Ocean's 11 -- ha!). They are Shakals, which is this show's version of jackals, apparently, known as jewelry robbers and infant eaters (WHY these two go together, I have no idea). Anyways, the proprietor of the jewelry store is some old guy named Sam, who seems almost resigned to the robbery -- like he expected it for some reason. He makes it into his vault just as the thieves break in, but hearing them set to work drilling through the vault door Sam goes for his most valuable possession -- three gold coins, which he promptly swallows, foiling the robbers.

When Nick (David Giuntoli) and Hank (Russell Hornsby) arrive at the scene, they discover the door of the safe blown in, and the mangled body of the store owner inside. The use of explosives leads them to conclude that this is more than just your garden variety smash-and-grab -- perhaps they were after a specific item(s)? Meanwhile, back at Criminal HQ, we learn that the target of the robbery was the coins -- and since they aren't with the rest of the loot, our criminal trio starts to turn on each other. The smarter crook, Soledad (Jordi Caballero) takes off, leaving his compatriots to dance around the trust issue when they discover a mysterious third presence in the house that leads them to end up shooting each other (BECAUSE THEY ARE THAT DUMB). The new guy is a Wesen Hawkman, actually called in the Grimm-verse a Steinadler. This is exciting because the Steinadler is played by Titus Welliver, and while I really have no idea who he is HE LOOKS SUPER FAMILIAR so yay for that. 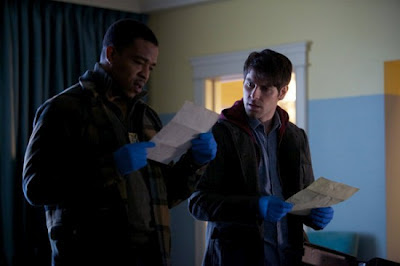 So the medical examiner discovers the coins in Sam's stomach, and seriously why is no one talking about how friggin' LARGE those suckers are? I could see swallowing something penny-sized buty these coins...yeesh! Anyways, Hank is strangely eager to take the coins for evidence, and the M.E. is strangely upset to see them out of her control -- OOOOHHH, GRIMM-ISH ARTIFACT ALERT! So Hank keeps acting progressively weirder, and while all of that is going on he & Nick track the robbers' car to their hideout where they discover the Steinadler, who goes by the name of Farley -- and since he's in a house with two dead bodies AND Nick sees him transform, he gets hauled in for questioning.

Hank is getting SO irrational Nick finally sends him home, and at this point I'm thinking he (meaning Nick) is being inordinately SLOW because you have a Wesen on your hands, how about taking a closer look at the coins at the center of this case? But whatever. So Renard (Sasha Roiz) shows up in a nice suit (WIN) and HE takes the coins, much to Hank's chagrin, and we see him make a phone call where he identifies the them as the Coins of Zakynthos, which is apparently a Greek island. BACK TO FARLEY: He's very much aware that Nick is a Grimm, and unlike 99% of the Wesens Nick's met thus far he seems strangely okay with that. Apparently Steinadlers are known for being "heroic and noble," but at the same time you can't really trust them?? TALK ABOUT A MASS OF CONTRADICTIONS! Farley very helpfully explains the origin of the coins (which you can read all about here), but to make a long story short the coins go all the way back to the ancient Greeks, and whoever has them in their possession becomes a creepily charismatic leader (no surprise the last place the coins were seen was the Third Reich and we all know how THAT turned out).

And this is where things get REALLY interesting -- since World War II, Grimms have been the "keepers of the coins" since they are somehow magically less susceptible to their influence, and this is great because it gives Nick's status as a Grimm some historical context that personally I think has been a bit lacking. All of this is very fascinating but them Farley drops a BOMB -- the last Grimm to protect the coins was killed for them 18 years ago, leading Farley to lose the woman he loved because she left him to raise her sister's kid. THIS IS NICK'S LIFE STORY! SHOCK! AWE! MORE SHOCK! This does lead to a nice scene with Juliette (Bitsie Tulloch) where Nick discusses his inner conflict over this revelation -- which leads me to once again gush about how much I love Nick & Juliette as a couple. If this show breaks them up IT WILL BREAK MY HEART. 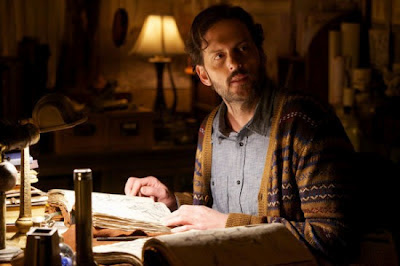 When in doubt Nick turns to Monroe (Silas Weir Mitchell), who is is usual adorable self as he continues to geek out over being allowed in Aunt Marie's trailer/Grimm archive (that is never going to get old). Monroe fills Nick in on exciting things like Shakals and Steinadlers, particularly the latter's ambiguity when it comes to things like loyalty and SIDES! As if Monroe geeking out over Marie's antique video projector isn't enough, THEN the show gives me a shirtless Renard scene as he dreams about being the fearless leader of an adoring crowd. Not really into the totalitarian implications there, but Renard is susceptible to the coins so I will cut him a bit of slack. *wink* While Renard is being all fearless leader-y, Nick and Hank track down the missing Soledad where some paperwork clues them into the fact that the coins aren't safe for human handling because they are POISONOUS! Which leads them to get all "WE MUST SAVE OUR CAPTAIN!"

This culminates in a fairly suspenseful confrontation in a creepy, dimly lit parking garage as Nick and Hank, with the now-free Farley's assistance, race to stop a disguised Soledad from attacking Renard and stealing the coins. Of course Nick as an ulterior motive since Farley clued hm into the fact that Soledad was in on his parents' not-so-accidental deaths. Between Nick going after Soledad and later confronting Farley (who stole the coins in the confusion of the garage melee), he's really stepped things up in the charisma department. He's got a ways to go but at least Giuntoli is giving me an increasing feeling that Nick is growing into this famous "Grimm heritage," learning how to control and leverage it, and I like that. Of course hiding the coins in the back of a cabinet in Marie's trailer, which seems like the MOST UNSECURE LOCATION IN THE WORLD is a bit of a step backwards, but whatever. Logic is not always this show's strongest point. *wink* Oh, and the revelation that Hitler was some sort of Wesen? In the context of this show I thought that worked really well, driving home the sense that Grimms have been fighting evil like that throughout the centuries. Thoughts?
Posted by Unknown at 2:00 PM

Unless I am much mistaken, this is the episode in which we get the Renard trifecta . . . Renard in a great suit, Renard shirtless, AND Renard in a uniform!

@Kaye - You are not mistaken, my friend, this is indeed the episode of the great Renard trifecta! :)

This is my favorite episode so far! I kept it on the DVR, I liked it so much. It had everything! Nazis, The Precious, a secret from Nick's past, characters who might be good or evil, old cameras. I absolutely loved the scene at the end where Nick takes the ring back and is like, "Forget about this." And Farley's like, "I tried," and Nick tells him, "TRY HARDER." Or read Lord of the Rings, for pete's sake. ;)

@Tasha - You are not kidding, this episode really did have everything. And the LOTR parallels -- haha I am laughing so hard but goodness that is SPOT-ON!