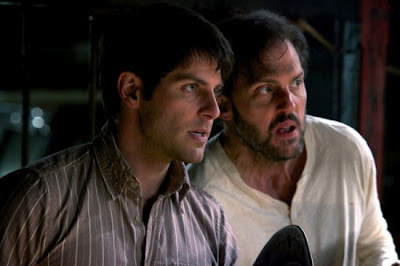 This episode of Grimm is one of my favorites. :) "Last Grimm Standing" is based on the story "Androcles and the Lion," though personally I think it owes more to Fight Club or The Hunger Games. This hour features one of the show's most chilling openings -- a scruffy, filthy stranger is tracking something (or someone?) through the woods. He sort of reminded me of a Ringwraith. This leads us to an elderly retired couple, very much in love, are preparing for their evening meal when the husband goes to investigate the reason their dog won't shut up. Just outside the home the husband comes upon a wesen (creature), which looks like some sort of gigantic walking lizard/alligator hybrid. The creature ends up basically disemboweling the husband and then cutting the wife's throat before frantically feeding on their still-raw dinner steaks. When the foreboding tracker shows up he's brought friends on horses, and they lasso the wesen and drag him into the woods -- very much a Western-style lynching -- transforming into the horrified, screaming face of a man.
When Nick (David Giuntoli) and Hank (Russell Hornsby) arrive on the scene the sloppy nature of the murders leaves them puzzled -- what kind of killer just doesn't care about the evidence he leaves behind? And what the heck is with the horse tracks? While Nick and Hank work on puzzling this out, Juliette (Bitsie Tulloch) discovers an engagement ring tucked in Nick's dresser -- the look on her face just kills me. I LOVE Nick and Juliette as a couple -- even when Nick's "charisma" as a Grimm is somewhat lacking, the sense of genuine affection between him & Juliette keeps me hooked. Of course this ring was purchased pre-Grimm, so Nick has some things to figure out if he's going to stay in this relationship and keep Juliette safe.
The prints at the crime scene turn out to belong to an ex-con and boxer named Dimitri (Jeremiah Washburn), and on a visit to his parole officer, Leo Taymor (Nick Chinlund), Nick and Hank learn that Dimitri missed his last check-in and has in fact been AWOL for a few weeks. One of Dimitri's friends -- a wesen who is, I kid you not, according to the NBC website a "Dickfellig" (rhino creature) -- takes the investigators to their usual running trail, which just happens to be a few miles from the crime scene and riddled with horse tracks. While Nick and Hank track Dimitri's car to an abandoned warehouse, the other boxer (I can't bring myself to use his wesen name more than once!) is taken by the Grimm version of Ringwraiths. AS IF ALL THIS WASN'T INTERESTING ENOUGH, the warehouse is apparently serving as some sort of arena, decorated with Latin phrases on the floor and walls and blood-spattered EVERYWHERE. 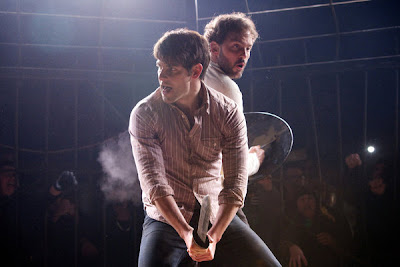 Now no surprise Nick and Hank don't speak Latin, but Renard (Sasha Roiz) does -- and HOW FREAKING AWESOME IS THAT?? I could listen to Renard speak Latin ALL DAY. (Hot? Check. Intelligent? Check. Rawr!) Also no surprise but equally awesome is the revelation that Renard knows about this underground fight club and that the parole officer is in on it. This leads to a confrontation in a creepy parking garage where Renard lays into Taymor about not following his rules, and when Taymor attempts to bluff his way out of the Captain's sights -- well that ends up being a fatal mistake. I thought it was fascinating that Taymor dropped the line about "royalty not having the power/rights" they used to, which raises the question -- is Renard some sort of wesen royalty? By setting rules for this fight club, was he trying to skate the line between good and evil? I'm just not convinced Renard is completely bad since he seems to cover for Nick on a regular basis -- I certainly don't want him to be at any rate. :)
Monroe (Silas Weir Mitchell) fills Nick in on the true nature and history of wesen fighting -- the Ringwraith-like creatures who have been acquiring fighters are actually Lowen, lionlike creatures who used to be forced to fight in the Roman coliseums. Now they turn the tables on their fellow creatures and force other wesen to fight to the death. While trying to get some inside information from a shady contact on the games, Monroe is sold out and captured -- it turns out the Lowen have been in the market for a Blutbad, but they couldn't be more wrong in thinking Monroe is a violent representative of that species. *wink*
Now the Androcles aspect of this story comes into play when Monroe is thrown into a cage next to Dimitri, who has gone completely mad since his capture. Monroe does his best to help a brother out by removing a spike from Dimitri's hand, but that kindness is too little too late for Dimitri (but don't you love Monroe for trying so hard?). :) Also, how disgusting is it that the captive fighters are fed the bodies of the defeated? Talk about barbaric. When Monroe and Dimitri are pitted against each other in the arena, Dimitri shows no mercy -- and while Monroe puts up a good fight, he stays on the defensive, refusing to descend to the level the spectators want. I loved that, because it would've been so easy for Monroe to let out his "inner wolf" -- but somehow, in the midst of this horror, he manages to restrain himself for Dimitri's sake, I think, even though his opponent is too far gone mentally. IS THERE A MORE CONSIDERATE HUMAN BEING/WEREWOLF ON THE PLANET? I think not. 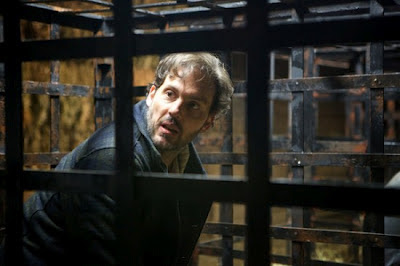 Just when things are looking really bad for Monroe, we come to the best part of this episode -- WHERE NICK COMES TO THE RESCUE! The Nick/Monroe dynamic is one of the show's greatest strengths and most frustrating weaknesses, because Nick has seemed SO. MUCH. SLOWER. when it comes to accepting the friendship and help Monroe offers in his new capacity as a Grimm. Sometimes I just want to shake Nick and go "get over the fact that he's quirky, that's what makes him AWESOME!" *sigh* But Nick's been coming around, and this episode seems like something of a turning point, so that's good. :) I mean Nick is actually willing to put his life on the line to save Monroe's (sure, backup is on the way but that doesn't mean things still can't go south!) -- NICK & MONROE AGAINST THE WORLD! LOVE IT! I especially appreciated Monroe's "pep talk" about how Nick was going to have to "dig deep" and call on his ancestors, etc., in order to survive Dimitri. :)
Nick is actually not bad with a sword, which makes me like him even more (it's a weakness of mine). But the calvary shows up in the form of Hank and other officers, and the Lowen Games is shut down for good. But Renard isn't one to leave any loose ends, so he ends up setting a wesen PRIEST on the recalcitrent Taymor, and I'm not entirely sure what this priest can do but it's bad, trust me on this. Renard's connections to the church surprised me a bit, which leads to more questions about his true identity -- is there some sort of priestly hierarchy in the wesen world that Renard is a part of? Is that how they are organized, and Renard is like in charge of a district or something? ENQUIRING MINDS WANT TO KNOW.
This was a very solid episode that not only gave me plenty of terrific Nick and Monroe moments, but deepend the mystery surrounding the deliciously enigmatic Renard (yes, deliciously enigmatic...mean every word). :) The only thing that concerns me is the look on Juliette's face when Nick is late for their anniversary dinner -- why does this lateness seem to be making her reconsider their future? Because that's how I read her expression. That aside, episodes like this make me happier than ever that Grimm has already been given a second season. Not content to rest on its laurels this is a show that has shown alot of growth and improvement since the premiere, and the groundwork has been laid for a ton of great developments in the Grimm universe. Give me more Monroe, continue to develop the Monroe/Nick friendship/partnership and I'll be a very happy fan. :)
Posted by Unknown at 1:47 PM

This episode was kinda stressful for me! But when Nick came into the fight ring to save Monroe I wanted to cheer. :)

@Tasha - It was pretty intense. I'm glad to see Nick really stepping up his game, though. :)