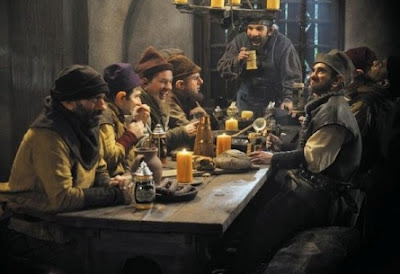 This episode of Once Upon a Time revealed the backstory of the surprisingly lovelorn dwarf Grumpy (Lee Arenberg), hinted at when he first met Snow (Ginnifer Goodwin) in prison when she was caught trying to break up Charming's wedding. Every love story in this show is SO SAD! Anyways...the episode opens in Fairy Tale Land, with the Blue Fairy (Keegan Connor Tracy) taking a pink fairy (who actually HAS A NAME) to task for being a klutz with some precious fairy dust (apparently its magic "powers the world" -- if that is the case, I'm thinking they need to cut off the Evil Queen's supply...just sayin'!). The pink fairy is named Nova (Amy Acker), a sweet and flighty dreamer who longs to be an official fairy godmother. So this brings up an interesting question -- if Nova is low fairy in the hierarchy, so to speak, why does she have a name and blue fairy is just "Blue"? Silly. So we have Nova the dreamer -- and some of her lost fairy dust falls through the ether and lands on an EGG in the dwarf mines, and out hatches Grumpy. This is a whole other issue much more disturbing than naming characters after colors -- why do dwarves hatch, fully grown?? This sorta creeps me out...
In Storybrooke we learn that Leroy, the Grumpy that was, has done a superlative job alienating his FTL dwarf friends, sadness. When Mary Margaret arrives at the diner in a mostly futile attempt to drum up volunteers for the upcoming Miner's Day festival, she gets so desperate she attempts to recruit Leroy. And he pulls out the HARLOT card (yes, apparently the dissolution of David and Kathryn's marriage is STILL all her fault). While attempting to buck up Mary Margaret's flagging spirits, Emma (Jennifer Morrison) gets a call -- a call that turns out to be the news about Kathryn's wrecked car. She heads out to investigate and Sidney (Giancarlo Esposito) shows up and offers to be all helpful (and Emma BUYS IT *headdesk*) and use his "contact" at the phone company to pull Kathryn's phone records. OF COURSE that contact turns out to be Regina (Lana Parrilla). *sigh*
Meanwhile, Leroy is stomping about the Miner's Day preparations and gets glitter spilled on his head by a nun named Astrid who turns out to be Nova. It is, of course, love at first sight. Which brings up a whole slew of other questions -- like what kind of nuns do former fairies make? And why nuns? And does Leroy have any idea who weird it is to watch him make googly eyes AT A NUN?! Did I mention Astrid is a NUN??? Weird. Those issues aside, Leroy and Astrid immediately click because that's what happens when FTL true loves meet in Storybrooke. She affirms his dream to sail around the world, and suddenly he decides that volunteering to sell the nuns' candles at the festival is the best idea ever. Of course people are going to buy stuff from Leroy, he's going to intimidate them into it, right? *wink* 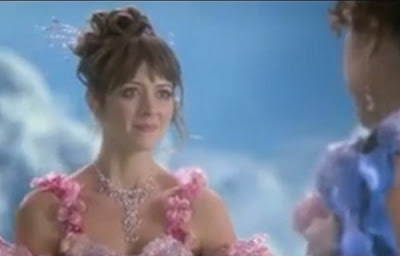 Back in FTL, Grumpy-who-will-be is christened Dreamy by his special dwarf pick axe and gets the low-down on dwarf living --  no love, no women, no kids, just concentrate on mining the magic diamonds that are ground in to fairy dust that power the planet. Best part of this sequence? Dreamy and his dwarf brethren marching off to work whistling a familiar working song. :) So Dreamy does the whole mining thing for a while until one day the woman of his dreams, Nova, shows up to pick up a batch of freshly-ground fairy dust, and Dreamy has to save her from wasting dust TWICE ("my hero!"). Dreamy finds her klutziness adorable, and she drops a not-so-subtle hint that they should go "watch fireflies together." *wink,wink,nudge,nudge* This goes completely over Dreamy's head, so he gets all moody over dinner at the pub, and surprise, surprise, Belle (Emilie de Raven) is there to give him some advice -- he's in love. Now, while I loved seeing Belle in her iconic blue and white costume, I am sorta annoyed that her second appearance in the show felt somewhat wasted. I want Belle & Rumple scenes, dangit!! Belle's advice about being in love does raise an interesting question, though -- is this scene pre- or post- getting kicked out of the castle by Rumple? Thoughts?
In Storybrooke Leroy is all gung-ho to sell the nuns' candles which is apparently their only source of income. Thanks to Astrid's flightiness (ordering twelve dozen tanks of helium instead of just twelve -- why the heck do nuns need helium anyway?), the nuns are on the verge of being evicted by their landlord Mr. Gold (Robert Carlyle). Mirroring the friendship we've seen earlier in FTL, Leroy and Mary Margaret band together to SAVE THE NUNS! and try going door-to-door to sell candles, but that pesky harlot tag gets all the doors of Storybrooke slammed in their faces. But Leroy is all "never say die" and decides to sell Mr. Gold his boat for the rent money, only of course Mr. Gold is all "I can't stand nuns, let's kick 'em to the curb." (Big win here being Mr. Gold in a sharp suit, yay!) Leroy's at his wits' end when Astrid shows up with a pie to thank him for his help, and when the truth of the matter -- that not a single candle has been sold -- is revealed, it appears that Leroy and Astrid are farther than ever from reclaiming their happy ending (hello, we still have the NUN ISSUE). 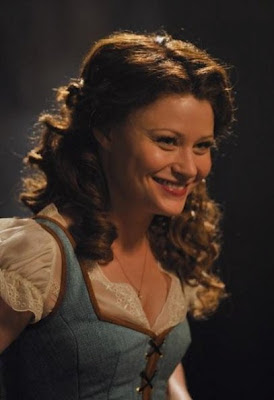 Wrapping things up in FTL, Dreamy's decided to say to heck with a dwarf's life and sail the seven seas with Nova, until Bossy dwarf (Ken Kramer) plants doubts in his mind that dwarves are incapable of love, and then Blue shows up and drops the bomb that if Nova forsakes her calling she'll LOSE HER WINGS (I suppose that's better than disbelieving children making fairies drop dead, right?). Basically if you are part of either of these two groups, don't buck the system. *sadness* However, I've got to say it was a bit of a refreshing change to have a FTL romance hit the rocks thanks to someone other than the Evil Queen. After breaking the bad news to Nova, Dreamy returns to the mines with a new, harsher edge, breaking his first axe and getting rechristened with the name Grumpy by its replacement. GRUMPY NEEDS A HUG.
In Storybrooke Leroy and Mary Margaret are having a pity party until he has a moment of zen -- life shouldn't be about letting your failures or regrets define you, but instead about holding on to the good memories, and building from that. Leroy is all inspired to CARPE DIEM and takes a pick axe to a transformer, knocking out the power. I'm not gonna lie, I kinda cheered. I'm a total sucker for big moments like that. :) So now every one of those Storybrooke ingrates want to buy candles and in the blink of an eye Mary Margaret and Leroy sell out. THE NUNS ARE SAVED, because everyone decides to use candles instead of, you know, fixing the transformer. A grateful Astrid is all chummy and BFF-y with Leroy, and apparently CANDLES is the way back from the whole tramp stamp thing for Mary Margaret since Granny (Beverley Elliott) offers her OWN CANDLE so Mary Margaret can light hers (oh the symbolism!).
So all's well that ends well...almost. There's a suspicious phone call from David (Josh Dallas) to Kathryn the day of her disappearance (on the oh-so-conveniently provided phone records from Regina's lackey, Sidney), and Regina is all fake-worried-friend up in arms about Emma doing her job and not showing bias towards her roomie. Emma knows she must DO HER DUTY and goes to the festival to bring David in for questioning. The shock and horror of seeing Charming hauled off in the back of a police cruiser is BEYOND WORDS. Anyone not in Regina's camp has to know somebody's gonna get railroaded, right? *sigh*
On the whole I'm a little ambivalent about this episode. Grumpy and Nova were sweet but overall this ep felt more like filler than critical backstory. And the whole dwarves-hatching-from-eggs and fairies-turning-into-nuns thing kinda weirded me out. :P I did, however, like seeing Leroy and Mary Margaret take some tentative steps toward re-establishing their friendship in the Storybrooke world. Thoughts?
Posted by Unknown at 9:56 AM

I agree, it was a filler episode, although the ending got us to where we needed to be. Nova's dress drove me absolutely insane =)

Howver, when they whistled that working song, I was giddy =)

@Ella - Oh my goodness, the fairy costumes are terrible! The skirts are like lampshades on crack. :P

I agree!!! =D And the had birthday streamers on the bottoms too....ugh...awful

@Ella - Ha! You are so right. Maybe that is why Blue Fairy is so strict and bitter...she hates her clothes...

This seems like an abnormally snarky recap. I like! :) I actually managed to see this episode, but weirdly the nun thing didn't bother me. What did bother me was that everyone was all like, "YA HOMEWRECKER," to Snow--is Storybrooke stuck in a 1950s morality tale? Come on.

@Tasha - Snarky? And here I was worried I wasn't snarky enough! LOL! That's awesome! :) Oh the Mary as homewrecker thing has been bugging me ever since it started. I mean RIDICULOUS. It takes two to tango people. Gotta give Mary some credit for owning up. Yeesh!

Yeah, I agree, it felt like a filler episode, but likely because none of the main characters appeared in FTL. Even Belle's appearance was far too brief (but it seemed to be post-Rumpel).

The whole dwarves hatching from eggs was weird too. (Made me think of the "dwarf women" conversation in Lord of the Rings - "It's the beards.") The nun thing didn't really bother me though - not as mean as the curse having your true love MARRIED TO SOMEONE ELSE. Fairies=nuns seems in keeping with what little we know of them in FTL. And since we haven't met any male fairies yet, are their origins as weird as the dwarf eggs?

I thought this was a cute episode. I also like the Nun aspect, because it's kind of relating to her choice to be a fairy -- celibate. It was a fun modern twist on it.

@Katie - I HOPE Belle's reappearance was post-Rumple...means she hasn't written him off completely. :) And good point about the female only fairies...you've got me wondering now!

@Charity - It was cute, just not my favorite! And you (and others) are bringing up some good points...maybe the nun thing was fairly logical. :)

Late to the OUAT party, but why would Belle a woman oh high birth be at a pub in "regular" clothes? I think she peaced out on her dad and his lands and embarked on her own adventure like a boss and Regina captured her during that time.