Review: A Night to Remember by Walter Lord 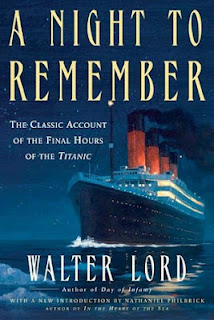 First published in 1955, A Night to Remember remains the definitive, classic tale of the sinking of the Titanic. Walter Lord interviewed more than sixty survivors before committing their searingly vivid recollections to his minute-by-minute account of the Titanic's fatal collision and the experiences of both passengers and cew under pressure of the unthinkable: the swift plummet into icy waters of the ship promised never to sink.

With a new introduction by Nathaniel Philbrick, bestselling author of In the Heart of the Sea and Sea of Glory, this fiftieth-anniversary edition of Walter Lord's classic brings the drama of that night back to life. As Philbrick concludes in his introduction: "From first to last, A Night to Remember is about the people who briefly inhabited the Titanic, and never again will an author have the opportunity to speak to so many of them. In this most essential way, Lord's book can never be outdone, making A Night to Remember the ultimate survivor's tale."

I cannot believe it's taken the impending 100th anniversary of the sinking of the Titanic to compel me to finally delve into Walter Lord's 1955 recounting of the great ship's final hours, A Night to Remember. As detailed in the foreward to the fiftieth anniversary reissue, Lord possessed a lifelong, enduring fascination with the doomed Titanic, perhaps born out of a childhood trip on her sistership Olympia. Irregardless of the origin, Lord's passion for the subject shines in this slim volume's tightly-plotted recreation of the ship's final hours and the sinking's aftermath. Lord was in the unique and enviable position of being able to interview over sixty survivors of the sinking for his book, which he then incorporated into a blow-by-blow recreation of every moment -- from the collision with the iceberg to the Carpathia's rescue of less than a third of the Titanic's total passenger list. Lord's brisk, documentary style makes you feel as if you're watching a film of events unfold, lending the gradually dawning realization of the enormity of the danger facing the ship a depth and intensity that makes this an absolute page-turner.

As Lord comments in his acknowledgements, A Night to Remember "is really about the last night of a small town" -- and by extension the beginning of the end for an entire way of life. I confess that while I've always been susceptible to the "Titanic mystique" I never really thought about the socio-economic repercussions of the tragedy. From the massively wealthy movers & shakers (i.e. John Jacob Astor IV) to the poorest immigrants in Third Class, Lord lays out a convincing argument that the Titanic was the "last stand of wealth and society in the center of public affection" -- to wit, the loss of that class's exclusivity on privilege and relative immunity to bad press. A whole way of life, the close-knit culture of the First Class passengers, an air of civility and chivalry, all of that vanished on that icy night in April, rocking the world to its core and paving the way for the unsettled political and socially charged atmosphere of the 20th century.

This is an even-handed, balanced presentation of the events of April 14, 1912 and its aftermath. Lord manages to present what I feel is a relatively unvarnished view of events, but tells them in such a compelling manner that one never loses sight of the horror and human toll of that fateful day. A Night to Remember is not only an extraordinary document of the ship and her time, but of the best and worst that mankind is capable of, and of the dangers of letting the legend eclipse the great human toll of that night, and of what we can perhaps learn today from the ordinary men and women on that voyage who found themselves called to do extraordinary things.
Posted by Unknown at 10:15 AM

I haven't read this lately, but I did about, well, fifteen years ago when I was obsessing over the RMS Titanic. It's a great book. The movie is a great movie, too -- it is what made me fall in love with 2nd Officer Lightoller as a hero.

I've seen the movie, but I actually didn't even know it was a book! Are you doing anything special for the Titanic anniversary?

This sounds fascinating! I'll have to see if I can track this down. I've always been intrigued with this story. I remember a friend had a big coffee table book full of the photos taken when the ship was discovered, I guess from the 90s? And I would just pore over it, especially a photo of a piece of a porcelein doll. It just gave me the shivers!

@Charity - I don't read a lot of non-fiction, so I was thrilled with how gripping a read this book proved to be. And I think I now know exactly how you feel about Lightoller. :)

@Tasha - Well, all of these Titanic-themed posts are "dry runs" for an article in the next Femnista issue. Beyond that I'd like to blog about the new miniseries and read a few more books. You?

@Heather - Oh it is! Brings the whole tragedy to life in a way I've never experienced before.

@Kristin - No argument from me there. :)

@Ruth There are a bunch of events in Denver, including at the Molly Brown House, I'd like to go to. But I probably won't because no one will go with me. *sadface*