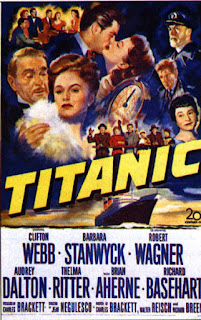 With the 100th anniversary of the sinking of the Titanic rapidly approaching, I wanted to take the opportunity to revisit the history of that unfathomable disaster and some of the films inspired by it. Particularly the "other" Titanic films, beginning with the 1953 classic Titanic starring Barbara Stanwyck and Clifton Webb. While this film lacks the gloss, spectacle, and budget of its more famous 1997 counterpart, actually I prefer it. Yes, it lacks the more impressive special effects and spectacle of the James Cameron film, and one can take issue with various historical liberties (particularly common in Hollywood's "Golden Age"). But I think at least one of the many reasons a general public fascination with the Titanic has endured is that it is in many ways a cross-section of humanity. On that ill-fated liner were some of the richest and most privileged individuals in the world (i.e. John Jacob Astor) alongside the poorest of immigrants, and in the face of that iceberg all men and women were equalized. And that is the greatest strength of this 1953 classic -- bringing a human face to the tragedy.
At the centerpiece of this film (which won an Oscar for Best Original Screenplay) is the strained relationship between Julia Sturges (Barbara Stanwyck) and her husband Richard (Clifton Webb). As the film opens Julia is fleeing her society-obsessed husband with her two children, Annette (Audrey Dalton) and Norman (Harper Carter) for a more humble, grounded life in her home state of Michigan. She almost makes a clean "getaway," if you will, but Richard foils her plans by purchasing a steerage passenger's ticket and coming aboard. Webb and Stanwyck are two of classic Hollywood's brightest stars, and they positively shine in their roles as the estranged couple. The tension and genuine sense of heartbreak in their scenes -- particularly evident in Stanwyck's expressions (Webb is much more stoic), as she throws herself whole-heartedly into the role of Julia -- is practically palpable. The emotion and the history and the heart-wrenching sense of lost opportunity between these two characters makes their road toward the film's inevitable conclusion -- the sinking -- that much more wrenching, driving home the human toll of the tragedy in a brilliant, heartfelt fashion. 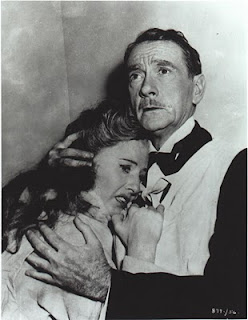 There's a youthful love story here as well, one that crosses class boundaries and foreshadows the changing and loosening societal standards and norms of the still-young 20th-century. Annette Sturges is a daughter of privileged, raised (in particular by her father) with an eye to making a brilliant marriage. In only his tenth film appearance, a very youthful Robert Wagner plays the very middle-class Gifford Rogers, a Purdue student who determines to pursue an acquaintance with the lovely Annette despite her initial disdain of his distinct lack of antecedents. Their budding romance is a joy to watch, principally because one cannot help but like the energetic and determined Giff. And while some may argue Giff's eventual survival is contrived (he falls from the Titanic while attempting to cut a lifeboat free & is subsequently rescued), personally I like the fact that the sweet Giff and Annette romance has a chance of surviving post-sinking.
One of the biggest sticking points between Julia and Richard is her view of his general uselessness outside of transient social obligations. The biggest blow to Richard prior to the sinking isn't the dissolution of his marriage -- it's the discovery that his beloved son, the "prize" who will carry on his name, is actually the product of an affair. Norman idolizes his father, and seeing Richard shut the child is an extraordinarily painful moment. However, when it becomes clear that the ship is going down and that many will not survive thanks to an appalling lack of lifeboats, Richard steps up in an extraodinary fashion. In large part the reason this film works so well for me is the character of Richard and his actions during the ship's final moments. Watching Richard realize that family, not social trappings, are the only things that matter is just one way in which this film serves as a powerful reminder of the best that humanity is capable of in the worst of times. And I defy you not to shed a tear during Richard and Norman's final moments. That, people, is why Clifton Webb is a classic.
I can't go without mentioning Thelma Ritter's performance as Maude Young, her character one of the nouveau riche who is Margaret Brown (the "unsinkable Molly Brown") in all but name. Her no-nonsense, unflappable attitude towards, well, everything and everyone is an absolute joy to watch. She takes a particular interest in George Healey (Richard Baseheart) a former priest suspended for his reliance on alcohol. Healey is an absolutely heart-breaking character, completely lost and without purpose until during the sinking he resolves to try and rescue crewmen trapped in the engine room. Both Healey and Richard become unexpectedly heroic during the sinking, providing two of the film's best performances.
Clocking in at a relatively short ninety-eight minutes, Titanic is a well-paced, smartly executed film that holds up extraordinarily well over fifty years after its release. This is not a big, glossy epic by today's standards -- and even by the standards of Hollywood's classic era this film feels remarkably understated. By focusing on the Sturges and a handful of other passengers for the first half of the film, this becomes a remarkably intimate viewing experience -- so by the time of the collison and sinking, we as viewers are well-invested in the lives of this handful of players caught up in a horror beyond their imagination.
I found this quote by Stanwyck, on filming the scenes where the lucky passengers to acquire spots in lifeboats flee the doomed liner --

"It was bitter cold. I was 47 feet up in the air in a lifeboat...the water below was agitated. We were re-creating an actual tragedy and I burst into tears. I shook with great racking sobs and couldn't stop."

That sense of responsibility, if you will, towards the material and the history is glaringly apparent in Stanwyck's performance. Leaving the lifeboat this is a woman eviscerated. It is a brilliant showcase for Stanwyck's considerable acting talent and a testimony to the enduring power of a little film with a lot of heart. Worthwhile viewing, especially as we approach the 100th anniversary of that infamous weekend in April that saw the loss of so many lives.
Posted by Unknown at 4:26 PM

I far prefer this version of the story as well. I totally adore Barbara Stanwyck. Robert Wagner is completely gorgeous. (By the way, did you know the 2 of them were having an affair at this time...something Mr. Wagner revealed in his recently-published memoirs.)

While the 1997 film has the special effects and the gorgeous Celine Dion ballad, it also has unnecessary sex and nudity...things I don't have to worry about in the 1953 version.

How ironic, I just watched this version this afternoon! I agree that there is something special about it, even though it is VERY "Golden Hollywood." There's no attention to authenticity at all! But it is a joy to watch, if such a thing can be said of such a tragic story.

@Patti - I had NO IDEA about Stanwyck and Wagner, thanks for sharing that little bit of trivia. :) Thanks for stopping by!

@Charity - Great minds, hmm? ;) I think part of this version's appeal is this sense that they really did have a heart to honor the people involved, if that makes sense...??

I love this version...I can't say that I love it more than the 1997 one, but I do love it just as much (and I especially appreciate not having to dodge so much language and inappropriate content :). I think it has a much more hopeful feeling and ending (as hopeful as it could be, considering) than the newer one.

I had read that quote from Stanwyck, too, and loved it. And I have such a crush on Robert Wagner in this film. :) He's so adorable and I'm not ashamed to admit that I'm glad he survives.

I've got the movie "A Night to Remember" coming through Netflix today, and then next up is the German Titanic movie. Then I'm planning on rewatching Titanics 1953 and 1997 before April. :) It's so interesting to see all of the different takes on the tragedy.

@Kristin - I agree! And I know exactly how you feel about Wagner in this film -- I'm glad Hollywood granted us that concession. :)

Enjoy 'A Night to Remember'!