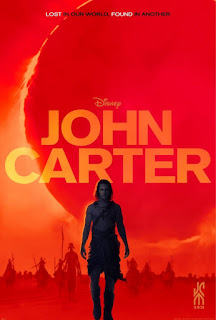 Yesterday afternoon I went to see John Carter. I'm a sucker for big sci-fi epics, and was quite curious as to what this film was about, exactly, because I thought Disney did such a crap job marketing it. Seriously, the studio trailers told you nothing of substance which is a real shame because not only was the movie pretty good, but apparently this property is arguably the grandfather of modern science fiction (the Edgar Rice Burroughs series of Mars novels first appeared in 1912) -- and I can't be the only massive Star Wars fan that had never heard of this, right? The shoddy marketing campaign for this film -- inexplicably refusing to capitalize on the story's place in the canon of classic science fiction -- makes absolutely no sense. And I have to think that is where a large portion, if not most, of the blame lies for the movie's poor performance at the box office. Because John Carter was a pretty entertaining flick, which surprised me after the ho-hum promotional push.

All of that said, I'm not going to be able to resist making this review a little tongue-in-cheek, as I found some of the spectacle rather humorous. But I don't view that as a detraction -- it reinforced by overal favorable impression of the film as being fun...because after all I don't watch as many films as I do to think (all of the time, anyways, ha!). 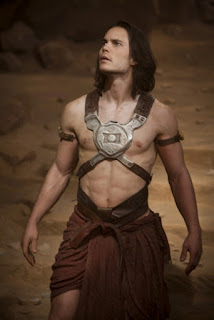 As the movie opens it introduces us to a Mars that is apparently a wasteland, with only two proper cities on the entire planet. The first is led by some guy named Sab Than who looks remarkably like Dominic West (ha!), which led to my first "what the heck is moment. Now for some inexplicable reason West has always rather creeped me out, which served him well in this role as Sab Than is CRAZY and power-mad. So Sab Than is picked to possess the magic blue electric energy weapon (seriously I have no clue what it was called) by the lead bald guy in a fluffy silver-blue robe called Matai Shang (Mark Strong). And this is the point where I start to bemoan Strong's career choices yet again, since this is a new version of the same villain he's played in at least seven films since 2007. Mark, you ARE BETTER THAN THIS! *sigh* Apparently Matai's character is something called a "Thern," which is some sort of legendary group that likes to go around facilitating the destruction of worlds (boo on them!).

So there you have the Mars (I just can't call Mars "Barsoom," sorry Burroughs) set-up, now cut to America where we meet John Carter (Taylor Kitsch), who is being followed by vacant-eyed men in suits and then ends up DEAD (or DOES HE??) after summoning his favorite nephew, Edgar Burroughs (Daryl Sabara, Spy Kids!), who turns out to be his heir. Edgar or Ned, as his uncle likes to call him, is given John's SUPER SECRET DIARY and this is where things start to get interesting. Carter was a Civil War veteran, very much a man without a country or cause because DANG IT, he's been burned by the world and his wife & kid are dead and WHY SHOULD HE CARE ABOUT PEOPLE ANYMORE?! (Side note: the Ned scenes in New York have something of a steam punk vibe to them after seeing the Martian technology...nice contrast.) Anyways, to make a long story short, John ends up in a cave full of gold which turns out to be some sort of alien way-station, because he kills one of those Thern peeps and then accidentally uses the pretty medallion the bald guy was carrying to transport himself to Mars. 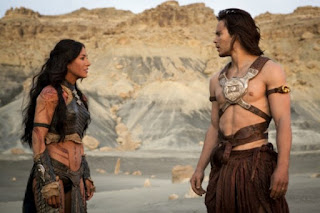 Now I'm going to cut John a little bit of slack here, because when he is transported to Mars (only it takes him quite a while to realize he's on another friggin' PLANET...the four-armed green people weren't a big enough clue), he acquires the awesome super power of being able to LEAP TALL BUILDINGS IN A SINGLE BOUND. Wait...there are only two cities...scratch the tall buildings part. *wink* (In 1912 fantastic leaping may have been cutting edge, who am I to judge?) So he hooks up with Tharks (the aforementioned four-armed green aliens), whose king Tars Tarkas (voiced by Willem Defoe) takes a liking to him, sort of as in the vein of a royal pet (that doesn't go over well). Now there is all sorts of clan in-fighting as Tars is faced with insurrection, and that's on top of family issues as his unacknowledged daughter Sola (voiced by Samantha Morton) is a clan outcast for holding radical views like NICENESS.

So John jumps around a lot, makes friends with with the giant bobble-headed dog-like creature (who is hilarious, and surprisingly useful), and then he meets Dejah (Lynn Collins), the warrior/professor-type princess of Helium, the "other" city that has been trying to holdout against Sab-Dominic-West-Than, and SPARKS FLY! But before I can talk about SPARKS, I should probably mention that Dejah's father Tardos Mor (Ciaran Hinds -- really! it's hilarious!) wants to marry her off to Sabs, because he is dopey enough to buy into the idea that an arranged marriage will buy lasting peace. Tardos is followed around by Kantos Kan, who is none other than James Purefoy! My reaction: 1) James what the HECK are you doing in this movie? 2) Why isn't this movie ABOUT you? 3) Thank goodness he gets one scene where he can be adorably snarky as ONLY PUREFOY CAN.

Back to SPARKS. I really liked Kitsch and Collins on-screen. Kitsch was an interesting factor...there's something about him that holds me back from being completely over-the-moon for him, but his voice -- gah!!! There are moments when it takes on this wonderful gravelly quality and I MELTED. And I liked this touch of gentleman-like charm Kitsch actually manages to convey occasionally...helped keep Carter somewhat grounded as a 19th-century hero. He even goes for the angst factor, which comes up during his transformation into a Martian hero, and while it isn't the best on-screen angst I've seen it certainly isn't the worst. One has to give Kitsh credit, he really seemed to throw himself whole-heartedly into this project. As for Dejah -- while I can't speak to how Collins's interpretation compares to the source material, she is very much in the vein of Princess Leia -- smart, sassy, and capable (and occasionally sporting a completely ridiculous wardrobe!).

Dejah is of course the impetus for Carter to START CARING ABOUT PEOPLE AGAIN...I mean MARTIANS...and DO something with his life, all in the best heroic journey/science fiction/adventure story tradition. I really liked the world-building here -- Mars is appropriately bleak and desolate, with pops of color in its cities and the inhabitants' clothing. I even rather liked the green Thark aliens. :) The costumes were this interesting hybrid of minimalist futuristic and ancient Roman soldier garb, which was rather interesting because because it was unexpected (Purefoy as an alien/Roman soldier? Yes, I'll take it.). Two of the three writers have Pixar work in their history, which perhaps explains the well-paced action and the overall feeling of energy that pervades the film. Yes, it has its cheesy moments, but at least it has fun with them. :) And I loved Michael Giacchino's score -- big, sweeping, at times romantic -- it was grand. 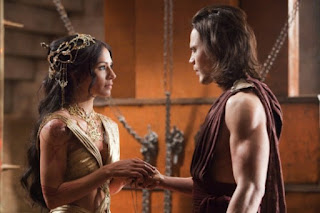 John Carter clocks in at a little over two hours, but director Andrew Stanton keeps the action moving at a brisk pace so there were no apparent lags in the forward momentum, for me at any rate. Knowing next to nothing about the specifics of the storyline, I was pleasantly surprised and entertained. It is unfortunate that those with no knowledge of the film's antecedents are probably going to feel like it is derivative (no thanks to the WORTHLESS MARKETING), but just knowing that this series of stories inspired countless writers and films made me appreciate Burroughs's influence in a way I'd never bothered to think of before. And the end of the film was absolute PERFECTION for a romantic sap like me. :) SPOILERS: Knowing that Carter spent over ten years desperately search for a way to return to Mars and his ONE TRUE LOVE just killed me. Kitsch sold me on Carter's single-minded quest. Gotta love a man who doesn't let a little thing like love separated by time and space hold him bac. *wink* All told, a lot more fun than I ever expected. :)
Posted by Unknown at 4:38 PM

Disney really did do a crap job of marketing this. I saw a few trailers for it and had NO IDEA what it was even about, and as such, no interest whatsoever in seeing it. I may rent it at some point, but ... wow, what an epic fail.

@Charity - Oh the marketing was TERRIBLE. If you click through to read the article I linked to in the first paragraph, it really lays it all out with a fan-made trailer that works OH SO MUCH BETTER.

I mean it isn't the best thing in the world but it was pretty entertaining IMO. And just the place of John Carter in the sci-fi canon makes it worth checking out on some level, I think.

I've actually read the Edgar Rice Burroughs Mars novels, and I didn't realize this movie was based on those when I first saw the trailers. They made it look like a rip-off of Stars Wars, 300, and Prince of Persia.

I know it is interesting isn't it? The trailers totally made it look like a rip-off of those films and others, when arguably they ripped of John Carter. HA!! ;)

I enjoyed your review! It is good to hear that I'm not the only fan of the soundtrack to this movie! :)

I was excited to see this simply because I knew who had written the story originally. *winks* I still have to see it though.

@indigogarden - Thank you, and thanks for stopping by! Isn't the soundtrack to this film wonderful? :)