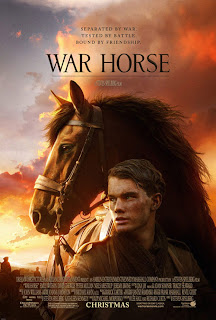 War Horse was one of my most anticipated films of the holiday season. Much like the noble animal from which the film takes its name, this movie has a flawless and impressive pedigree -- based on the beloved novel by Michael Morpurgo, directed by Steven Spielberg, packed with well known British acting talent, this story of a boy and his horse set against the backdrop of a world at war is guaranteed to tug at the heartstrings. And for the most part, it works. The one glaring factor working against this film is its length. Clocking in at two-and-a-half hours, the film is at least a half hour too long. Told in a mostly episodic style, the length, combined with the narrative "chapters," results in a meandering movie that misfires when it strays too far from the core conceit of the story -- the extraordinary bond between Joey the horse and his boy, Albert (Jeremy Irvine -- after seeing Irvine in this film, I'm really looking forward to his turn as Pip in Mike Newell's big-screen adaptation of Great Expectations). That's not to say the movie is a wash -- far from it. But Spielberg's reluctance to tighten the on-screen storytelling does the movie no favors.

But let's talk about what works. At a livestock auction Ted Narracott (Peter Mullan), a poor, hard-drinking Devonshire farmer with a gimpy leg -- a souvenir of his service in the Boer War -- sinks his family's precious savings into the purchase of a thoroughbred colt, all in order to pique his landlord Lyons (David Thewlis). Unknown to Ted, his son Albert had been eyeing the horse from afar and is thrilled with his father's purchase, promising to train the animal himself and christening him Joey. And so the groundwork is laid for an extraordinary friendship -- these two become everything to each other, and that faith and trust in each other is what enables the pair to conquer mountains (or, as is the case in the film, plow a rock-strewn field). But when the crop fails, the only way to save the family farm is to sell Joey to the army, now preparing to head across the channel to Europe thanks to the recent declaration of war.

Before I touch on Joey's wartime experiences, I have to say that I think what interests me most about this film, and what works best, is the relationship between Ted and Albert. THIS is something that I wish had been explored in greater depth. It's obvious that Albert is devoted to his family, but Irvine shades his performance with jus the right touch of youthful frustration and shame. Frustrated with his father's drinking, with his constant struggles to provide for his family, Albert like so many of us at one point or another just doesn't get his father, sure he can do better. It isn't until his mother Rose (Emily Watson) reveals the cost of Ted's war service that we get an inkling of what made the dreamer the drinker he is today. Ted, for his part, wants to do better, wants to be more, but he's spent so long repressing his Boer experiences he doesn't know how, I think, to come out of that protective shell. Mullan's performance is really quite powerful in its restraint.

Through Joey's wartime experiences we witness the best and worst of humanity, all the more starkly drawn because our guide, the constant throughout each vignette, is an innocent animal. In my opinion the best aspect of this "second act" of the film are the war scenes the bookend Joey's experiences -- the beginning, when he's trained as a cavalry horse, one of a noble company full of honor and ideas about how this war will be fought, little realizing the crushing blow to come that will strip away those ideals and along with them, so very many lives. And the end of the war, full-blow trench warfare when Joey, and the men around him fighting are thrust, quite literally, into the middle of hell on earth. I am sure some will disagree with me, but I could've done without Joey's brief respite at the French Grandfather's (Niels Arestrup) farm with the horse-loving granddaughter Emilie (Celine Buckens). The forward-moving narrative slowed to a crawl during this scene, and the grandfather's later appearance, solely in order to throw a convenient wrench into Albert's attempts to buy back Joey, felt a little too contrived and unnecessary. 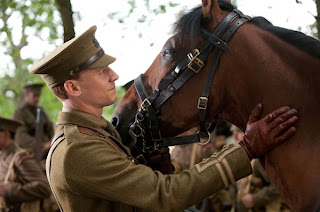 The advent of the war brings several familiar faces to the screen, namely Benedict Cumberbatch as the ill-fated Major Jamie Stewart and Tom Hiddleston as Joey's first soldier-owner, Captain Nicholls. While I love Cumberbatch (thank you for Sherlock), this sequence was all about Hiddleston (my appreciation for him has been well documented on this blog). He is ADORABLE. I loved how seriously Nicholls took his promise to Albert to watch over Joey, and it broke my heart when he was killed in the group's first charge. The concluding scenes of the war also featured several familiar faces, from Liam Cunningham as the Army doctor who treats Joey's wounded leg, to Pip Torrens as Major Tompkins, in charge of overseeing transport back to England after the Armistice, to Eddie Marsan as the hard-nosed Sgt. Fry, whose bluster hides a heart of gold.

As is the usual with Spielberg's period films, the attention to period detail is astounding. Every frame of film is a miniature work of art, from the sun-drenched, idyllic Devon countryside to horrifically realized trench scenes. There's a great deal of restraint in the war scenes -- this is not on an R-rated Saving Private Ryan level -- but nevertheless those sequences chilled me. I couldn't help but think of my father's stories about one of his uncles, who was a machine gunner during World War II, and who, much like Albert's father, could never talk about his wartime experiences. This was a war that changed everything, how the world fought and viewed combat, and was in many respects a great equalizer between the aristocratic officers and the "commoners" they commanded. I loved how the latter is realized in the understanding Albert reaches with David Lyons (Robert Emms), the previously insufferable son of his family's landlord, after saving his life in the trenches -- it was an extraordinarily well-done moment.

As the film ended, I found I wasn't focusing on Joey specifically as much as what Albert's homecoming would mean to his parents. Joey, Ted Narracott's one-time folly, the horse he purchased in a fit of pique -- that folly brings his son home -- and that may have been the film's most powerful moment for me. Because while so much had remained unspoken between those two characters, Albert's survival signals the possibility of a healing and a deeper understanding and appreciation between father and son. Whether or not the novel suggests that, whether or not that was intended I don't know -- but that to me is one of War Horse's most powerful moments. A father's folly brings his son home -- "In his heart a man plans his course, but the LORD determines his steps" (Proverbs 16:9). Though overly long, War Horse is a beautifully rendered film with many powerful moments -- definitely a worthwhile big-screen experience. (And film score fans -- John Williams has delivered yet another stunner with his work on this film -- that man is amazing.)
Posted by Unknown at 9:32 AM

I expect to watch this on DVD so it will be awhile. Part of me fears the emotional reaction. I cry at horse movies. No question.

But more of a tie in for me is the fact I grew up with my grandfather who served in WWI in the cavalry and taught me to ride and everything I know about horses.
I do love this nostalgic look back 100 years or so with the anniversary of the Titanic coming up and this glimpse into the great war. Downton Abbey has only added to this, hasn't it?

Wonderful reveiw Ruth! Thank you. I've heard it was l-on-g and I hope that doesn't become its downfall.

Our family saw this at the theatre on Christmas Day...our first-ever venture to the movies on Christmas.

I did enjoy the film...about 3.5 stars for me, somewhere between "like it" and "really like it." As you said, it was a bit long, and I don't generally do well with movies over 2 hours.

It was a beautiful, touching story which did get me weepy on several occasions. It's like "Black Beauty" in that it traces the life of a horse through several owners, but for whatever reason, I didn't like it as much as I like "Black Beauty." Still, though, it's an enjoyable movie experience.

Your review is totally fabulous, by the way.

My mom really wants to see this one. It looks interesting but not one that will entice me to go out to theaters. I'd much rather see "happier" stuff at the theater. =)

@Debra - Honestly I expected to cry MORE during this film, but for some reason that didn't happen, which surprised me. I suspect the length impacted that. You are so right about Downton Abbey helping bring this period of time to life once more! I hope you enjoy this film and that you'll let me know what you think of it whenever you do see it!

@Patti - I'm so happy you liked this movie too. I think 2 hours would've been a more than adequate length for this story -- agree with you there! And thank you & Happy New Year to you too!

@Rissi - Looking forward to reading your review whenever you do see this one! :) Happy 2012 to you too!

I'll see this one for sure, whether in theater or on DVD. I rather think it will be theater.

Have a Happy New Year, my friend.

@Lori - I'd love to hear what you think of this one, my friend! It is gorgeously rendered on the big-screen. A belated Happy New Year to you as well!