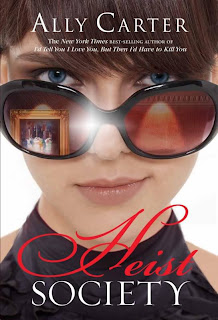 When Katarina Bishop was three, her parents took her to the Louvre...to case it. For her seventh birthday, Katarina and her Uncle Eddie traveled to Austria...to steal the crown jewels. When Kat turned fifteen, she planned a con of her own -- scamming her way into the best boarding school in the country, determined to leave the family business behind. Unfortunately, leaving "the life" for a normal life proves harder than she'd expected.

Soon, Kat's friend and former co-conspirator, Hale, appears out of nowhere to bring her back into the world she tried so hard to escape. But he has good reason: a powerful mobster's priceless art collection has been stolen and he wants it returned. Only a master thief could have pulled off this job, and Kat's father isn't just on the suspect list, he is the list. Caught beween Interpol and a far more deadly enemy, Kat's dad needs her help.

For Kat there is only one solution: track down the paintings and steal them back. So what if it's a spectacularly impossible job? She's got two weeks, a teenage crew, and, hopefully , just enough talent to pull off the biggest heist in her family's (very crooked) history -- and with any luck , steal her life back along the way.

Katarina Bishop is anything but your typical teenager. From earliest childhood she was raised by her parents to be a world-class thief, adept at every trick, every con, except that of living anything resembling a normal life. Kat pulled the biggest con of her life to "steal" an education from one of the world's most elite private schools, determined to be a normal teenager. But as good as that con was, Kat finds it impossible to escape her past when Hale, her former (ridiculously wealthy) partner and the boy she might just be in love with gets her kicked out of school in order to save her father's life. Kat's father is the sole suspect in the theft of five priceless paintings from the collection of the very dangerous Arturo Taccone, a man who doesn't care that her father isn't guilty, he just wants his paintings back at any cost. Kat finds herself squaring off not only against Taccone but against Visily Romani, a legendary thief so brilliant, so audacious, he couldn't possibly be real -- could he? With just two weeks to save her father's life, it's left to Kat to assemble a teenage crew and plan the heist of the century, proving that the girl might leave the thieving life, but you can't take the thief out of the girl...

Heist Society was RIDICULOUSLY fun. I've always loved a good caper story -- everything from Ocean's 11 (the original and the remake), and Audrey Hepburn's How to Steal a Million, to the Timothy Hutton-led show Leverage. Kat and company bear more than a passing resemblance to the Leverage crew, as she's definitely a thief with a heart of gold and the motley crew she assembles is very much a family, albeit an atypical one. This is a pure slice of escapist fun, a frothy confection that translates the romance of a classic heist film to the page, trading adult antiheroes for an appealing collection of too-smart-for-their-own-good, brilliant, loyal teens. If you're looking for danger and intrigue and gadgets galore, Heist Society delivers in spades. And Kat's potential romantic interests are Bond-like spies in the making -- particularly Hale, whose good looks, charm, and unswavering devotion to Kat are completely and utterly swoon-worthy.

While this is my first Ally Carter novel, it certainly won't be my last. Her writing positively crackles with an electric wit. Like the best on-screen heist, the storyline unfolds at a rapid pace with enough twists and turns to keep you guessing as to exactly how Kat will manage to pull off the biggest job of her young life. And just when you think this is "only" going to be a teenage caper story, Carter throws a curveball and ups the ante, making the paintings Kat seeks casualties of World War II, stolen by the Nazis and never returned to their rightful owners. Kat's desire to see justice over sixty years overdue meted out adds a layer of unexpected depth to the novel.

Heist Society is page-turning, unputdownable escapist fiction of the highest order that delivers pure, adrenaline-filled, romance-laced action in spades. Kat is a highly likable heroine, all the moreso because despite her unusual skill set she's a very authentic teenager. *wink* I can guarantee I'll be reading her next adventure!
Posted by Unknown at 7:23 PM

Forget about sounding cute, this book looks adorable! More recently I've gotten "into" teen fiction, so perhaps I should give this one a try. Like you, Ruth, I am totally a fan of caper-style films - just gotta' love 'em. =D

Thanks for the review!

I read this one this year, too. :) I thought it was really cute!

@Kristin - I'm about 100 pages into the second book, Uncommon Criminals, and it is equally fantastic!