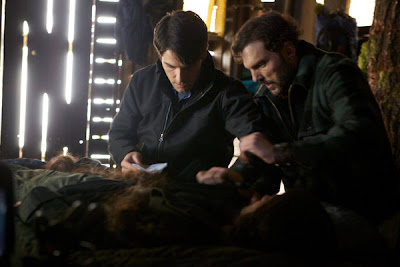 Grimm delivered yet another superb episode last night (seriously, we're seven-for-seven now? LOVE it!), this time tackling the story of Rapunzel in a wonderfully unexpected manner. I've always considered Rapunzel one of the "princess" stories, a romantic fairy tale, and in keeping with this show's history (i.e., expect the unexpected), Rapunzel becomes a missing persons case, one that hits unexpectedly close to home for Monroe (Silas Weir Mitchell).
When two hikers in the woods stumble upon a marijuana growing operation, they're almost killed until something -- or is it someone? -- enters the camp and attacks Delmar the oh-so-not-classy gunman, giving them an opportunity to flee. When Nick (David Giuntoli) and Hank (Russell Hornsby) arrive on the scene, they're struck by the unusual markings around Delmar's neck -- it's as if an unusually thick rope snapped his neck. While searching for evidence, Nick catches a glimpse of a wild child in the woods -- a figure with the face of a blutbad, and a ridiculously long rope of hair wound around its arm. And therein lies the episode's strength -- anyone familiar with the Rapunzel story knows that she lived in isolation, under the thumb of a powerful enchantress -- it takes the story to a whole new level of spine-chilling and creepy to turn the girl in question into a feral child, isolated by her lack of human contact and in this case, wolfish blood.
DNA tests prove that the hair belongs to a Holly, a girl at the center of a cold case missing child investigation from nearly ten years ago. I loved the fact that Hank had worked teh initial investigation -- this gave us an opportunity to really see his heart and commitment to his work, letting us see a bit more of what makes this supporting character tick. So, while the inisght into Hank's character was welcome, what really made this episode for me was Monroe. After last week's episode delving into Monroe's wild past, and now this week's episode driving home what an adorable softy he is, good grief the show is spoiling me. *wink*
What interested me most about Nick recruiting Monroe in an attempt to get through to Holly was what this told us about what it means to grow up as a blutbad. Since Holly was adopted, the ramifications of discovering one's wolfish tendencies (?) without any sort of support system is positively horrifying to think about. It also makes a whole lot of sense regarding why she spent nine years isolated, living in the woods. I LOVED watching Holly and Monroe connect on a blutbad level, and her realization that she's not alone, that there are others in the world like her was just brilliantly played. But more than that, I loved how Monroe had to really step out of his comfort zone to connect with one of his own kind. He spends so much time and energy suppressing his blutbad-self, that I think using that part of who he is to connect with Holly, to really make a difference in her life was a huge experience for him. It's a fascinating way of incorporating Monroe into Nick's work and life as a Grimm, and I hope the show explores this type of dynamic more in the future -- the whole creature-working-with-a-Grimm thing really flies in the face of the "rules" of the fairy tale vs. real world, and I love that.
This episode wasn't without a few issues, but nothing that detracted from my enjoyment of the story. The whole subplot about Delmar's brothers hunting down anyone that they thought *might* have killed their brother felt like a little much -- and that's saying something in a show where werewolves and killer bees is the norm. *wink* I also thought that the resolution of Holly's storyline was a bit too neatly tied up. The revelation that she attacked a male neighbor -- one can only assume that he'd made some sort of disgusting advance that triggered her transformation -- and then lived in hiding for years made so much sense in the context of the show, I couldn't believe that they wrapped things up by taking her straight home to her mother. This is a girl who can barely speak, who has lived a feral existence for over half her life, and Nick takes her straight home to mom -- no doctor's visit, not nothing. Monroe's a better therapist than I would've given him credit for, hmm? :P
The Grimm take on Rapunzel was yet another strong episode in the series, less heavy on the mythology of Nick's anscestry and as such speaks to the longevity potential of this series. If they keep this balance up storytelling-wise the possibilities are endless. :) There are hints that Nick's life could get very difficult now that he is so easily recognized as a Grimm -- the refrigerator repairman from two episodes ago is spreading the word about Nick's presence in Portland, and I have to think that it is this type of indiscreet discussion that is going to either get Juliette (Bitsie Tulloch) asking questions about Nick's life, or it is going to put her life in danger -- either option offers some intriguing story possibilities.
Grimm returns January 6th with "Of Mouse and Man," when a man is found dead in a dumpster, the investigation leads to a sly snake and timid mouse. Can't wait! :)
Posted by Unknown at 2:11 PM

Hmmm, you're reviews/posts are so tantalizing I am beside myself that we can't get this here:( Grrrr. I'm such a fan of Princess stories myself! Merry Christmas, dear Ruth. So glad you're here to visit when I need a break!

I was getting ready to post this on FB, but saw that you'd already put this up, so I'll post it here.

Maybe I wasn't really paying close enough attention while watching this episode, but the ending felt rather discombobulated to me. They never said exactly what happened between Holly and the neighbor. Did he kidnap her and take her out into the woods and that's why she attacked him? I half expected that the adoptive mother had discovered what she was and paid him to take her out to the woods to purposely "lose" here there and thus rid herself of a very troubled child (because you KNOW she had to be a troubled child at seven years old). What exactly was it that she was accusing him of in the lineup at the end? And why DIDN'T they take her to the hospital when she was burning with fever and bleeding from being shot with buckshot---which Nick said he couldn't get all of it out. Oh, and let's not forget the fact that she killed at least two people that we know about. And she wouldn't have had to kill the marijuana grower "in self defense" if she hadn't attacked him in the first place.

While I do love the show and adore the characters (especially Monroe), this episode felt lacking to me---as if they had a great idea but couldn't quite follow through on it.

@Laura - Hello my friend! Hope my blogs don't drive you too crazy. :) Merry Christmas to you as well!

@Kaye - The idea of this plot was brilliant and well executed in many respects, but I completely agree with you the ending was way too rushed/not well thought out. I think if the vigilante brothers subplot had been left out, maybe there would've been more time to wrap up Holly's story.

I didn't feel like the mother was guilty -- of course it could've been the now dead-father that wanted the girl gone. I felt like they were implying at the end that Addison was some sort of child predator that Holly went all wolf on when threatened...but of course, there were way too many loose ends to be sure.

I sort of think the first killing was in response to her seeing Delmar threaten the hikers.

I liked this episode a lot, but it didn't end like expected. I fully expected Monroe to have to take the girl in for awhile and help her with the transition to eventually reunite with her mother.... Thought she might be an addition to the cast. I agree the ending was rushed. I assumed Addison kidnapped her and took her out to the woods and she attacked him there and escaped (along with some of his camping gear), but that was only implied.

I agree that the end of this episode felt truncated -- "wait, she's wild and dangerous!" "okay, we'll take her home to her mommy then!" The least they could have done would have put "six months later..." after rehabilitation. =P

I loved that Eddie was the 'prince' of the story. He is really a softie! I also loved Hank in this episode--he's such a sympathetic cop. :)

@Lori - I really hope Holly returns to the show someday for another guest spot -- I think that would be fabulous!

@heidenkind - OMG! You are so right! Why didn't I think in those terms?! Monroe is the Flynn Rider prince of this episode! LOVE IT. And you are so right about Hank. He comes across sometimes as a bit of a cut-up but he really does take his job seriously and I love that.