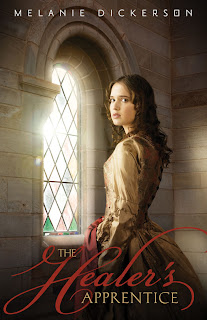 The Healer's Apprentice
By: Melanie Dickerson
Publisher: Zondervan
ISBN: 978-0-310-72143-7
About the book:
Rose has been appointed as a healer's apprentice at Hagenheim Castle, a rare opportunity for a woodcutter's daughter like her. While she often feels uneasy at the sight of blood, Rose is determined to prove herself capable. Failure will mean returning home to marry the aging bachelor her mother has chosen for her -- a bloated, disgusting merchant who makes Rose feel ill.
When Lord Hamlin, the future duke, is injured, it is Rose who must tend to him. As she works to heal his wound, she begins to understand emotions she's never felt before and wonders if he feels the same. But falling in love is forbidden, as Lord Hamlin is betrothed to a mysterious young woman in hiding. As Rose's life spins toward confusion, she must take the first steps on a journey to discover her own destiny.
Review:
Rose, the eldest daughter of a poor woodcutter, is newly apprenticed to Hagenheim Castle's respected healer, Frau Geruscha. She longs to prove herself worthy of her mentor's faith, for if she succeeds, being the next healer would mean a life of independence and freedom from her mother's desire to wed a lecherous merchant in order to elevate her family's social standing. Secure in her chosen path, Rose is certain her future is set until a chance encounter with Lord Hamlin, the duke's heir, awakens her heart to the possibility of love. But love between a commoner and a noble is unheard of, an impossibility particularly since the young lord is bethrothed to the daughter of a neighboring duke who has lived in hiding, under threat from a powerful sorcerer. As Rose struggles to suppress her feelings for the kind and handsome heir, her own life is thrown into turmoil thanks to the advances of both compelling and repulsive suitors, all with questionable motives. As the life she thought she knew comes unraveled, Rose's faith is brought to the breaking point as she must decide if she can trust the God she's always served with a future shadowed with danger and doubts.
Where on earth was this book when I was a teenager? As a life-long fairy tale aficionado, I was intrigued by the premise and captivated from the first pages, eager to discover how Dickerson translated the Sleeping Beauty story into novel form. Sleeping Beauty just happens to be my favorite fairy tale, so the stakes were particularly high -- and overall I was quite impressed with how Dickerson translated the fantastical, magical elements of the story into a real-world historical setting. Medieval Germany is the perfect backdrop for Rose's story, a world where the Christian faith she holds dear can believably collide with old pagan traditions, and princes like Lord Hamlin quested for their ladies fair, holding honor and duty above all else. The Healer's Apprentice is a heady mix of romance and adventure, grounded in the political and social history of the fourteenth century, rich with medieval mores and customs that flesh out the Sleeping Beauty story beats that were the heartbeat of my own childhood imaginings.
In my experience with her debut Dickerson has set herself up as something of a trailblazer in the realm of faith-based fiction by capitalizing on the enduring popularity of fairy tales and the growing demand for historical fiction in the young adult market. While Rose operates in the world of medieval Europe, she is an extremely likable and wholly relatable heroine as she attempts to navigate the murky waters of young adulthood in order to find her place in the world. I loved how Dickerson developed the romance between Rose and Lord Hamlin -- its sweet intensity is a nice complement to the story's origins, fleshing out one of the most famous relationships in the fairy tale world. This is a slim novel, its only drawback being the final third of the storyline where I felt the pace was bogged down by Rose and Wilhelm's respective longing for each other getting repetitive -- a lot of talk about feelings with little forward momentum to the story's climax. And while I appreciated the twist Dickerson applied to the storyline of obvious spiritual evil (instead of stock "magic") versus faith, I wish the faith element and spiritual warfare aspects of the story had been a little less pedantic and more organic in its portrayal.
However, those qualms aside The Healer's Apprentice is a sterling example of breaking new ground in Christian fiction, and it is to be applauded for its (mostly) successful integration of secular fairy tales and faith-based literature. As such this is a novel with potentially wide appeal, crossing markets and target audiences. Dickerson has delivered a promising debut here, and with her clear appreciation for fairy tales and historical research she is an author to watch!
Posted by Unknown at 10:26 AM

Looks like an interesting novel - will have to check it out. =)

Loved, loved, loved this book! Her newest is sitting on my nightstand, and the next one in line that's she working on sounds ah-ma-zing! :o)

I really want to read this! :) I entered the Goodreads giveaway for it but didn't win...guess I'll wait until the library gets it. :) A Christian fairy tale story definitely sounds interesting to me!

@Kristin - Girl, you are one of the people I thought of that would really enjoy this one -- hope you get to read it soon!

I've been curious about this book since I watched the book trailer on your blog. . . I shall have to get my hands on this one!

@Jess - Oh goodness, it has been ages since I posted the trailer, hasn't it? LOL! Hope you get to read this one soon!