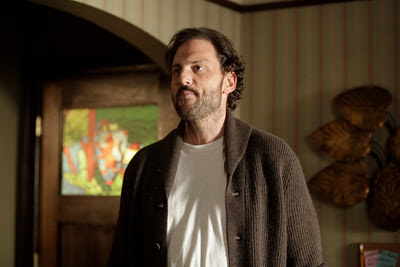 I suspect﻿ I'm going to start sounding like a broken record when it comes to Grimm, because seriously can this team make a subpar episode? I'm starting to think the answer is no. *wink* This episode took as its basis the story of "The Three Little Pigs," and as you might expect it provided some tantalizing insight into one of my favorite characters -- Monroe (Silas Weir Mitchell), the all too "refined" for his own good blutbad. But of course no straightforward retelling of such a familiar story would do for this show, and the story of pigs withstanding an onslaught of wolf attacks is transformed into a tale of vigilantism run amuck. The centuries old feud between the big bad wolves and the bauerschwein, a.k.a. the pigs, is about to explode in Portland.
The opening sequence is a stellar example of the artistry that goes into framing each shot of this show. The close-ups of a rather menacing face have a suspenseful, film noir-like feel to them, until they pull back and it is revealed that the character in question is more oversized teddy bear than a baddie, as evidenced by the fact that post house explosion he's more concerned about his comic book collection. Hap the blutbad has clearly hit the booze or drugs one too many times in his past -- he's so not got his life together, Nick (David Giuntoli) is shocked to learn that Hap used to be a close friend of Monroe's. I never stopped to think about it, but Monroe has clearly been exercising stellar amounts of self-control in order to contain his inner wolf. I have not given the cuddly ol' clockmaker enough credit. :P
I was actually rather horrified by Monroe's ex-girlfriend, Angelina (Jaime Ray Newman) and her sociopathic tendencies. I mean I get the whole wolf/hunter/raw meat thing, but killing for fun...that's a whole other thing entirely. I suspect that this will increasingly become the crux of Nick's involvement in the fairy tale world -- the struggle to determine attackers versus victims, to reconcile his birthright as a Grimm with the responsibilities of his job as a police officer.While I liked the introduction of Monroe's past, and the stark differences between his life now and the life on the edge that we can imagine he lived with Angelina, I do so wish she'd been played by pretty much anyone beside Newman. I have never warmed to her as an actress -- couldn't stand her on Eureka as Tess, really couldn't stand her here. *sigh*
The whole wolf/pig feud had a very Hatfield/McCoy vibe to it, and despite my antipathy towards Newman as an actress she did an excellent job reminding me of what Monroe is capable of, should he choose to unleash the beast within. I thought it was interesting that the bauerschwein on the flip side of this feud turned out to be a police officer, and is the first fairy tale creature in several episodes that hasn't recoiled in fear when they realize Nick is a Grimm. (Aside: the mud bath at the end of the episode -- completely creepy and disgusting! LOL!) Similar to the mellifers in episode three, Nick's dedication to his job seems to be placing him in the position of alienating creatures historically friendly to Nick's kind -- I'm looking forward to seeing how that plays out over the course of the show.
Considering the rapidity with which Nick is encountering and being recognized as a Grimm by creatures in all levels of the fairy tale hierarchy, I have to think it is only a matter of time before Hank (Russell Hornsby) or Juliette (Bitsie Tulloch) start to question what is exactly is going on with Nick. In the comments section of my post on episode five, Tasha posited the theory that Juliette could be a member of the fairy tale world -- that is a twist I would LOVE to see, especially since her chemistry with Nick makes her role prime for expansion on-screen. Thoughts? Perhaps she's a princess or something, only she has amnesia!! *wink*
This episode gave some fantastic depth to Monroe's character, and since the door is open to a reappearance by Angelina I expect we'll see her again at some point, testing Monroe's resolve to stay on the straight and narrow. Nick's real life and Grimm life are getting increasingly messier and intertwined, and I am loving every second of this journey. Bring on the next installment! :)
Posted by Unknown at 5:18 PM

The heavy wolf emphasis and the tough moral decisions in this episode reminded me a lot of Being Human - so much that I was expecting vampires and ghosts to show up (though Angelina's blutbad face did remind me of 90s vampire makeup anyway). This show just keeps getting better and better.

I do wish they'd get off the animal kick though - so far they've had wolves, pigs, rats, bears, bees, a guy with a goat head, and a beaver or whatever the fridge guy was - and it's only been 6 episodes! Thankfully, the next episode looks like it's going to non-animal territory by retelling the story of Rapunzel. Since I assume Once Upon a Time will eventually tell her story too, it'll be fun seeing how the two contrast.

I'm not a fan of Jaime Ray Newman's acting either - didn't like her on Wedding Daze (TV movie), Veronica Mars, or Eureka. She did okay on two episodes of NCIS, though.

I'm not a fan of Newman, either, although to be fair it seems like she consistently plays the characters who are SUPPOSED to annoy you.

What I liked most about this episode is that, even though the fire investigator killed Hap and did these horrible things, you still kinda felt for the guy! And that mud scene was disgusting. :P

I also think it's interesting how Nick is constantly being pulled in different directions. Like in this episode, he's on team A because he's a cop, team B because he's a Grimm, and team C because he's Eddie's friend. So far he's been playing it like Switzerland and making out neutral, but I wonder how long that's going to last.

@Katie - Oh, interesting comparison and good call on the Being Human similarities! Like you, I'm also glad that next week the show is taking a break from animal-related stories and going into human territory with a Rapunzel retelling. I'm VERY curious how they bring this story to life on-screen!

@heidenkind - Good point about Newman, but why oh why is she ALWAYS playing characters who annoy me? :P

And you are SO right about the sympathy factor for the fire investigator...things are getting very sticky, nothing is black or white and if the show handles that right, it will be very interesting to see how Nick copes.

Your Switzerland line? Had me laughing out loud, just so you know. ;)