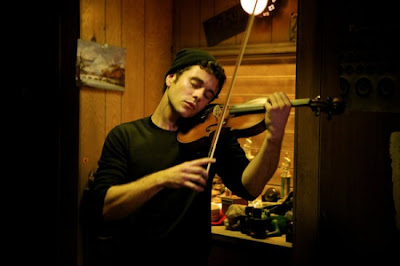 Grimm is a show that is just MADE of one awesome thing after another, isn't it? Seriously, this show rocks. After being sadly absent and sorely missed due to the Thanksgiving holiday, Grimm returned last night with the first of two new episodes this week. This episode took its cue from "The Pied Piper of Hamlin," which is another fairy tale that has always rather creeped me out (hello?? charismatic stranger luring away children by the truckload??), and the Grimm writers translated the gist of the Piper's story just brilliantly into a modern-day setting. The episode opens with the murder of a strict music teacher at an exclusive prep school -- and the whole getting eaten by rats while trapped in your car thing is easily the show's grossest case yet. I'm talking Bones levels of grossness. But that aside, this show starts to depart from the formula of previous episodes, and in doing so introduces Nick (David Giuntoli) to a whole  new aspect of his life as a Grimm, namely how Grimms are perceived by those they have historically "hunted."
Prior to this episode, the fairy tale creatures Nick encountered were almost always baddies, guilty of perpetrating crimes against other creatures or regular humans who, unlike Nick, can't recognize their true nature. In this episode Nick meets Reinigen, ratlike creatures who are among the lowest of the low on the fairy tale creature "food chain." Roddy is a bullied teenage musical prodigy, kicked out of his exclusive prep school after being framed by fellow students who looked down on his blue collar antecedents. Roddy is a reinigen, from a family of the same, who all just happen to be rat catchers -- of course. I loved how the show transformed rats into social outcasts, complete with the edgy mannerisms you'd expect from...ahem...rodents. I was fascinated with the idea of making Roddy as a human "Piper" an underground DJ -- of course it is completely beyond my capacity to understand how calling yourself Retchid Kat while wearing a giant pink cat head to raves makes you cool, but whatever.
So of course based on the pattern of previous episodes, and knowing the Pied Piper storyline, I expected Roddy to be some sort of sociopath rat. I was pleasantly surprised by the way the show subverted those expectations, by making those who'd bullied Roddy the guilty party, having staged the disgusting prank that (accidentally) killed their teacher. It brought to mind the warning from Nick's aunt, that as a Grimm he as to hunt down the bad ones. The reinigen are textbook examples of creatures who are easily victimized in the creature world. As are the hamsters, or whatever it was the refrigerator repairman transformed into when he saw Nick at his home (that was a hilarious scene!). Both encounters introduce Nick to the reality that some of the Grimm-creatures he's going to meet will fear him just because of who he is, not because of anything he's done. I hope the show reveals either more Grimms or delves into Nick's family history -- that could be fascinating!
This episode was a nice break from the more mythology-heavy introductory episodes this season. It was chock-full of the humor and chills I've come to expect from this show, and a great example of how Grimm can deliver an enjoyable, interesting hour featuring an investigation that  is turned on its head by a fairy tale, sans the Grimm mythology the show has been working to establish. (And I've enjoyed that, just to be clear -- but this episode is a great indicator of the longevity the show's concept is capable of sustaining.)
My favorite part of this episod was when Nick asks Monroe (Silas Weir Mitchell) to meet with Roddy, creature to creature, to try and convince the teen that despite the fact Nick is a Grimm he doesn't mean Roddy any harm. Any scene with Monroe is guaranteed to be an episode highlight, and Mitchell delivers in spades here. I like how Monroe seems to really enjoy shocking fellow fairy tale creatures by revealing that yes, he IS in fact on friendly terms with Nick the Grimm. His "pep talk" to Roddy is an exercise in self-help hilarity -- the blutbad and the rat whisperer. LOL!
I also thoroughly enjoyed the continuing "buddy chemistry" between Nick and Hank (Russell Hornsby), especially when Nick surprises Hank with a rubber rat squeaky toy in their pizza box -- that moment had me rolling. I think it is interesting how Hank subtly envies Nick's relationship with Juliette (Bitsie Tulloch). His longing for a relationship opens the door for Captain Renard (Sasha Roiz) to send the witch woman Adalind Schade (Claire Coffee) in his path. Which brings up the whole question again of who the heck is Renard? Some sort of hexenbiest pimp (ewww, right?)?? ENQUIRING MINDS WANT TO KNOW. And speaking of Juliette, this episode starts to play with the idea that given Nick's "Grimm aura" she's going to start suspecting that something is up with her boyfriend -- all that remains is to figure out when she'll start asking serious questions, and will Nick own up to his secret life or lie, blowing up his happy home life?? Oh the possibilities... :)
Grimm returns tonight with another new episode -- NBC is seriously spoiling fans this week! I'd love to hear your thoughts on Grimm's return!
Posted by Unknown at 11:33 AM

SO happy this show is back on. I really enjoyed this episode, too, although I still find it hard to believe there's are a bunch of band geeks out there as 'cool' as those kids kids were. But whatever. I've always been fascinated with the Pied Piper story, as well, especially since it's based on historical events.

As for Juliet, I'm starting to think she's got to be part of the fairy tale world. Maybe she's a princess or something. I hope she's integrated into the show more because I really like the scenes between her and Nick.

I also loved the music in this ep. :)

@heidenkind - I think those kids decided they were cool b/c they came from money. LOL! And excellent idea about Juliette -- I think you could very well be on to something. THAT would provide a fascinating twist for Nick to deal with. And she and Nick are pretty adorable, fast becoming one of my favorite TV couples, so I hear you -- she needs more screentime.

And the music! I LOVE the violin, and the music in this episode was amazing, you are so right!