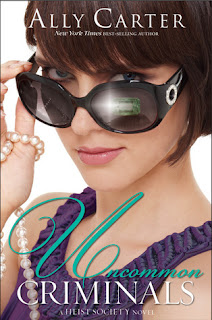 Katarina Bishop has worn a lot of labels in her short life: Friend. Niece. Daughter. Thief. But for the last two months she's simply been known as the girl who ran the crew that robbed the greatest museum in the world. That's why Kat isn't surprised when she's asked to steal the infamous Cleopatra Emerald so it can be returned to its rightful owners.

There are only three problems. First, the gem hasn't been seen in public in thirty years. Second, since the fall of the Egyptian empire and the suicide of Cleopatra, no one who holds the emerald keeps it for long -- and in Kat's world, history almost always repeats itself. But it's the third problem that makes Kat's crew the most nervous, and that is...the emerald is cursed.

Kat might be in way over her head, but she's not going down without a fight. After all, she has her best friend -- the gorgeous Hale -- and the rest of her crew with her as they chase the Cleopatra around the globe, dodging curses and realizing that the same tricks and cons her family has used for centuries are useless this time.

Which means, this, Katarina Bishop is making up her own rules.

After the resounding success of her first major heist, where she led the teenage crew that robbed the most secure museum in the world, Kat Bishop, to the consternation of her family and friends, has transformed herself into a most unusual thief. Instead of stealing because that's the family business, Kat specializes in recovery -- returning priceless art to its original owners or their heirs, righting the wrongs of wars long past. When an old woman approaches her with a tantalizing story -- her parents discovered and were robbed of the fabled Cleopatra Emerald, a priceless gem unseen for over forty years, Kat can't resist the challenge. Against the advice of her friends, and sure she can succeed, Kat stages a brilliant heist and delivers the jewel. High on the con's success, Kat's world is rocked when she discovers that she's been the victim of a carefully staged con, decades in the making. In order to right a terrible wrong Kat must travel halfway around the world and take on the best in the business, and along the way must decide where she fits in her quirky family, and if a girl raised on the con can make herself vulnerable enough to trust those who want to love her most.

To put it simply, Uncommon Criminals rocks. Taking place a mere two months after Heist Society, Carter's second outing featuring Kat & Crew is every bit as fun as the first. Only this time around, the cons are bigger and the stakes are higher, making Uncommon Criminals every bit as entertaining and compulsively readable as its predecessor and then some. Whether sixteen or thirty-one (like yours truly), Kat's glamorous, danger-tinged lifestyle and budding romance with the ever-loyal Hale is sure to appeal to anyone craving a wickedly funny and clever slice of escapist fantasy. Thanks to her rather unorthodox upbringing, Kat has the savvy and smarts of a seasoned pro, but Carter tempers this gloss of maturity with a smattering of realistic teenage angst -- and it is this unlikely combination of jet-setting know-how and winsome, occasionally clueless, good intentions that make Kat such a winning heroine.

One of my favorite aspects of this story is how Carter chose to reveal tantalizing glimpses about Kat's family history, hints that suggest how she became the budding master thief and con artist that she is today. I loved the revelations about the enigmatic and all-knowing Uncle Eddie, and how his past heartbreak and the choices he made as a reaction to that proved to be a powerful illustration of the power of their familial bond. His actions help free Kat to become the best version of herself, allowing her to embrace her history instead of running from it. The supporting cast of characters that make up Kat's "crew" is likewise well-drawn and compelling. Carter continues to flesh out the group dynamic, whose banter and camaraderie are the equal of the best ensembles in heist films, with an energy and verve that makes the novel just plain fun to read. And the budding romance between Kat and Hale -- Oh. My. WORD. Carter masterfully creates a sizzling chemistry between her leads, and frankly Hale rivals the best romantic heroes found in escapist fiction of this ilk -- Hale is a teenage Bond with heart.

I absolutely adored this book -- the only downside to reading it so quickly is that the wait for book three is prolonged. Uncommon Criminals cements Carter's reputation in my view as a go-to author for page-turning, pulse-pounding escapist fiction -- this is the definition of a rollicking good read. I for one can't wait to join Kat on her next heist!
Posted by Unknown at 10:17 AM

...looks like such a cute series; I really should check into it. =) Thanks for blogging about them.

@Rissi - You're welcome, I hope you get to check them out at some point!