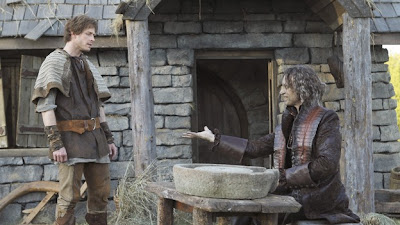 Obviously I am two episodes behind on Once Upon a Time, which is really unfortunate when episode seven was such a gut-wrenching game-changer. But rest assured, once I work through the seven stages of grief (at least twice), I will have plenty -- PLENTY -- to say about Sheriff Graham. :)
Episode six of Once was full of the things I love about this show, mainly Josh Dallas being completely adorable as Prince Charming/David. And we got the added bonus of there being TWO Princes in Fairy Tale Land! The writers played the HIDDEN TWIN BROTHER CARD!! And they BOTH fight really well with swords so no worries there! I really wasn't expecting the twin brother card, but hey, whatevs -- since the flashback to Charming's origins in Fairy Tale Land pre-dates his meeting with Snow White, the discovery that the Prince we've gotten to now over the previous five weeks is a substitute, a stand-in, adds some fascinating layers to his character. Prince 1.0 was "procured" for a childless king by Rumplestiltskin (Robert Carlyle) and raised to become a leader of men, a dragon slayer -- and also a bit on the cocky side, since in an "audition" for King Midas (Alex Zahara) he turns his back on a warrior who is not dead yet (having a Monty Python moment!) and gets knifed. HANDILY ENOUGH the dead prince had a twin brother, who is a little bit David-esque with the shepherding thing and the noble spirit, etc., who becomes Prince 2.0 and the Charming we've all come to know and love since the beginning of the show.
Now I love, LOVE how Prince 2.0 gets roped into killing Midas's dragon and with no history of fighting or swordplay in his background rescues his men earning their admiration and loyalty and kills the flippin' dragon (which was pretty cool -- I am really hoping that whenever this show does the Sleeping Beauty story they have Maleficent transform into a dragon, because who doesn't want to see that? I thought so...). So Prince 2.0 a.k.a. the rise of the noble shepherd dovetails with David attempting to adjust to his post-coma life. Henry (Jared Gilmore) posits a fascinating theory about why David is so drawn to Mary Margaret (Ginnifer Goodwin) -- because he apparently entered the Storybrooke in a coma, the curse wasn't able to fabricate a fake real-world life. Really makes sense, and makes his longing for Mary Margaret absolutely heartbreaking to see, because you know they are so close to rediscovering their happy ending -- but seeing as this is only episode six of season one, well heck that can't happen yet. Grrr. :P 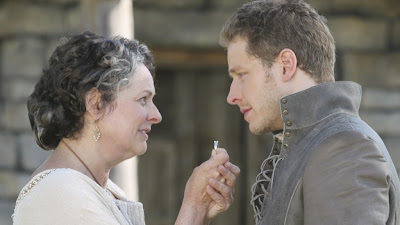 I'm really interested to see how David's story plays out in Storybrooke, and if it is revealed that he's actually married to the snotty blonde princess character Prince 2.0 was blackmailed into getting engaged to in Fairy Tale Land. I loved the revelation that the ring the Prince was so insistent about retrieving from Snow White in episode three was from his poor birth mother, who gifted it to him with the promise that true love follows it -- yes, I am a sap -- loved that insight, though! Said snotty blonde was strangely enough transformed into emotional and needy Kathryn (Anastasia Griffith), who attempts to befriend Regina (Lana Parrilla). Now it has been well established that the consequence of the curse on Regina's life was that she is incapable of love, but time after time we see scenes where she is almost desperate to prove she has it, she feels it -- or so it seems. Her fanatical attempts to control Henry, and then her "softness" when Kathryn thanks her (little does K. know!) seem to me to reveal chinks in her armor. But of course, especially given the events in episode seven, I'm pretty convinced that Regina is too far gone and deserves every disaster Emma (Jennifer Morrison) can heap on her head. (Yes, Regina, I don't CARE what Snow did to you I AM BITTER, woman! You crossed the wrong viewer! *wink* :P)
Back to the episode at hand...I'd love to hear your thoughts on Regina vs. Mr. Gold. Half the time I think they are in league with each other, while the other half of the time I'm convinced that Mr. Gold would undermine Regina at any moment. Regina basically sends David into Mr. Gold's pawn shop, where a spinning windmill seems to hypnotize him, "awakening" his fake Storybrooke memories. On the one hand this is a very effective way of prolonging the David/Mary Margaret separation, but on the other hand it opens the door to both characters -- true loves -- engaging in intimate relationships with others out of frustration/bitterness/what have you...and the idea of that, well I just have to say it leaves a bit of a sour taste in my mouth. Thankfully this is a show that really does show a lot of restraint on-screen, but I suppose it is a mark of how much I like this show and these characters that this aspect of the twists and turns on-screen bugs me. Apparently Mary's rebound relationship will involve Dr. Whale (David Anders) -- any thoughts on who his fairy tale counterpart is?
This episode ends with Emma making the shocking discovering that Sheriff Graham (Jamie Dornan) is sleeping with Regina -- Graham made the discovery a million times worse by lying about it (stupid man!). I loved how it took this unwelcome bit of knowledge to reveal Emma's feelings for the handsome Sheriff...and her reaction to really get him looking sick about the state of his "love" life. (It is really, really hard to confine my thoughts to episode six...but I'M TRYING TO BE GOOD!!)
Hopefully I'm not going to jinx myself by typing this, but I'm going to try and have an episode seven post up BY THE END OF THIS WEEK. :)
Posted by Unknown at 6:15 PM

The only thing that the name "Dr. Whale" makes me think of is the whale from Pinocchio. After all, they named the Storybrooke version of the magic mirror Mr. Glass.

I think they're going to have to re-do the voiceover at the beginning of the show---in which they say "only one person" knows the truth. Because I'm pretty sure Rumple/Mr. Gold knows exactly what's going on, too. In fact, I think he may actually know more than Regina knows about some things that are going on.

@Kaye - Yeah no kidding...and they've already gone the whole cricket-was-a-human angle...it would be FASCINATING to see them tell the whale from Pinocchio's backstory. LOL!

And the voiceover...yeah that seems a bit disingenuous...I wouldn't be surprised if we discover Rumplestiltskin is pulling ALL the strings! I'm looking forward to the next episode for more than just the fact the show will be back -- I gather it is about Rumplestiltskin's backstory...I want to know how he became such a creep. LOL!

I think "Mr. Gold" is out for himself first, but he's more than willing to do Regina's bidding if it means making people miserable.

The twin brother card threw me. Dallas is soooo adorable, though, I just wish the show would be about him. :P

I am so glad to see you finally getting around to this =) I have been wondering your thoughts....

I loved this episode. I wasn't expecting the twin brother card either, so it was a nice addition. But would everyone quit making deals with Rumplestilskin already? ;-)

And I look forward to the most recent episode's review from you!! =D

Why am I not surprised that you are watching this series Ruth. We seems to like all the same things!

@heidenkind - I really want to know, though, how Mr. Gold is immune to Regina's power! I suspect that he's also willing to back-handedly help someone in order to tick off Regina...occasionally anyway.

And seriously. Dallas is ADORABLE, I agree. So we have to work out some sort of Dallas/Hathaway timeshare thing... ;)

@Ella - I know, I know, I am so behind! :P And I agree, you'd think people would have figured out that Rumplestiltskin deals are NOT a good idea...

@Laurel Ann - YAY! You're watching Once too? Why am I not surprised either?! :)

I got to the end of the episode that aired this past weekend and my first thought was "... uh oh, Ruth's gonna have a fit." =D

Don't push yourself to write about it until you're ready. ;)

@Charity - You know me so well. ;) And you notice I have yet to write about "that" episode that shall forever live in infamy. :P