Review: Only Uni by Camy Tang 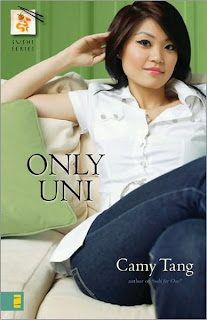 Senior biologist Trish Sakai is ready for a change from her wild, flirtatious behavior. So Trish creates three simple rules from First and Second Corinthians and plans to follow them to the letter. No more looking at men as possible dates, especially non-Christians. Second, tell others about Christ. And third, she will persevere in hardship by relying on God. And just to make sure she behaves, she enlists the help of her three cousins -- Lex, Venus, and Jennifer -- the only Christians in their large extended family.

But Trish's dangerously tempting ex-boyfriend, Kazuo the artist, keeps popping up at all the wrong moments, and her grandmother, who has her eye on his family money, keeps trying to push the two of them back together again. Then there's Spencer, the hunky colleague at work who keeps turning Trish's thoughts in the wrong direction.

It just isn't fair! She's trying so hard, but instead of being God's virtuous woman, she's going nuts trying to stand firm against two hunky guys. Trish thought following her three rules would be a cinch, but suddenly those simple rules don't seem so simple at all.

Trish, next in line to inherit her family's title of "oldest single female cousin" now that Lex (from Sushi for One?) has a boyfriend, wants to take control of her life. Her wild, flirtatious behavior has left her unfulfilled and alienated her cousins and best friends, but most devasting of all has created a chasm between her and the Lord. Her desire for a turning point hits an all-time high when she discovers that her father's having an affair, her mother has a heart attack, and her control-freak Grandma keeps throwing Kazuo, her too-tempting (not to mention non-Christian) ex-boyfriend in her path. More than anything, Trish wants to feel pure before God again, but she doesn't know how He and her long-suffering cousins can possibly accept that her desire for change is real and genuine after witnessing so many failures. To prove her resolve, she creates three rules to follow from First and Second Corinthians - 1) no more looking at guys as potential date material, especially non-Christians, 2) witness to others about Christ, and 3) persevere and rely on God. However, her three simple rules turn out to be not so simple after all when Kazuo, bolstered by her grandmother's support, becomes temptingly considerate and attentive and handsome work colleague Spenser proves to be an irritatingly attractive distraction. With two temptingly handsome guys with vastly different motives pursuing her, can Trish ever hope to stick to her rules and transform her life?

I absolutely loved Lex's story in Sushi for One?, and couldn't imagine how Camy could possibly top that novel with a sequel - especially one that focused on cousin Trish, who I found to be rather self-centered and unlikable. However, Tang reveals that underneath Trish's bravado and occasionally flaky exterior is a heart full of hurt and confusion - having gone so far and given away so many pieces of herself, Trish doubts if she can ever be redeemed. Only Uni takes the strengths of its predecessor - the family dymanic, the snappy dialogue, the yummy food *wink*, and a sensitively handled spiritual thread - and deftly tackles the issue of a "backsliding" believer's journey into grace. Trish's desperate search for redemption and change, while liberally peppered with humorous episodes, is one of the most moving portrayals of God's grace that I've ever read. Tang's characters are so real they practically leap living and breathing from the page. Their emotions are so real you'll want to cry with them when they hurt, laugh out loud at their nutty escapades, and rejoice with their successes. Camy is one of the funniest authors I've ever read, but she balances humor like few can with healthy doses of real issues and emotional depth. I can't wait to read the prickly Venus's story in Single Sashimi, releasing in September. Bravo to Camy for delivering another winner!

This review is another one from the archives, originally written in March 2008.
Posted by Unknown at 4:49 PM