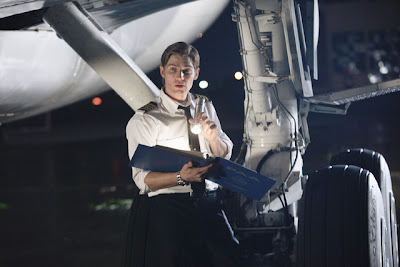 Pan Am's eighth episode aired before Thanksgiving, but given ABC's sadly erratic scheduling of this gem of a show (not doing this one any favors ABC, just sayin'!), I held off watching it to review episodes eight and nine (which aired this past Sunday) closer together. This episode was thoroughly enjoyable and highlighted one of the main reasons I fell in love with this show -- its sense of adventure and possibility, There were no spy-related shenanigans, no characters I like hooking up with the wrong people (here's looking at you, Dean, with your stupid Ginny obsession and you, Laura, with your random sailor).
This time the Clipper Majestic is headed to Caracas, only there's more than one storm brewing -- the actual hurricane they're headed towards, and the drama that will erupt among the passengers when one unexpectedly falls ill. The substitute navigator, Chuck (Matthew Rauch), was endlessly entertaining with how he got on EVERYONE'S nerves, but especially Ted's (Michael Mosley). Ted can be a cocky jerk, but over the course of the show he's slowly revealed a heart beneath the bluster. Chuck is like Ted unrestrained -- BAH. *wink* It killed me when Ted tells Chuck that Laura (Margot Robbie) is off-limits because she's waiting for Mr. Right. Seriously, Laura, you had to start the whole sleep with a random sailor thing?? Ted is RESPECTING you for your restraint. (Excuse me while I go bang my head against the wall...)
Kate (Kelli Garner) appears to have made something of a recovery from losing Niko to spying -- but curiously enough it is a kindly older passenger who gets her to thinking about what she wants from life. Henry (Harris Yulin) is flying to Caracas to commemorate the fortieth anniversary of his marriage to his beloved late wife Blanka. Henry's passion for his wife's memory seemed to suggest to Kate that her earlier passion for spying at the expense of her personal life was too costly a trade -- but maybe I read her reaction wrong? Either way, it was refreshing to see Kate as just Kate, not the spy, not the woman with the secret agenda, just someone making a meaningful connection with a passenger. 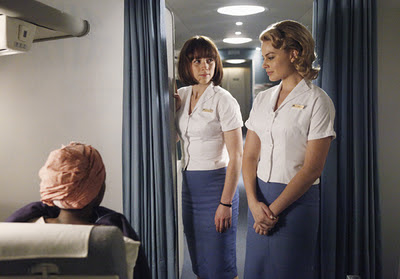 Henry's heart attack and eventual death is the stuff high melodrama is made of, but when it comes to this show I can't fault its predisposition for soap opera. For my money Pan Am does a decent job balacing the soapiness of some of its storylines with real humanity, because for all the characters may frustrate me occasionally, they are so dang likable and genuine and real. In a desperate attempt to save Henry's life, Dean (Mike Vogel) makes the call to land the plane in hurricane- and revolution-ravaged Haiti. It's a dicey situation as they run the risk of a plane full of passengers being taken hostage. Since Colette (Karine Vanasse) is a native French speaker, she and Ted take off to find a doctor -- and instead come across a desperate refugee. This sequence highlighted a couple of things I want to mention -- first, Ted can't shut up when he's nervous -- hilarious! Second, Colette is by far (at least so far, anyway) the classiest and most interesting member of this team. Her childhood under Nazi rule makes her particularly sensitive to the refugee's plight -- and her insistence on trying to save one life is admirably portrayed.
Maggie (Christina Ricci) is relegated to the background in this episode, and I can't say I mourned the loss of focus for her character. However, it is worth mentioning that I loved how the wealthy passenger (Aaron Diaz) she's charmed by at the beginning of the flight turns out to be a total, selfish, cowardly LOSER. And she recognizes his lack and calls him out on it -- the zingers she flings his way are pretty humorous.
And third -- and most important to me (HA!) -- this episode brings the electric attraction that has been simmering below the surface between Dean and Colette to the surface. Yes, FINALLY. After the plane leaves Haiti and is safely diverted to Miami, the stewardesses pull an "I am Spartacus" routine to save Colette from taking the blame for smuggling a refugee into the United States. It was a very nice touch have Kate call Richard (Jeremy Davidson) and insist that he arrange the girl's immigration papers (speaking of characters I'd like to see together, forget Niko -- ultimately I am all about Kate and Richard!). This whole episode gave Dean a chance to return to pre-Ginny form. He really is a good guy, he really is capable of being a leader (see Ted defending his decisions to Chuck!), and when Colette finally, finally kisses him at the end of the episode I may or may not have cheered. :)
Hopefully I'll have a post about episode nine up soon!
Posted by Unknown at 2:36 PM

This was probably my favorite episode so far. I loved it! :)

I really liked this episode. =)

I'm a few episodes behind on this one. I thought ABC had canceled it; it feels like forever since they aired an episode.

Kate and Richard? YES YES YES!!!!!! I've been thinking about that ever since the beginning of the show, I'm glad someone else agrees. :-) I'm just waiting for Ted and Laura to get together and I'll be a happy camper LOL!

@Kristin - Yay! :) Definitely near the top of my list too.

@Renee - Oh heck I'm glad you agree with me on the Kate and Richard thing! LOL! I just KNOW he likes her. :)