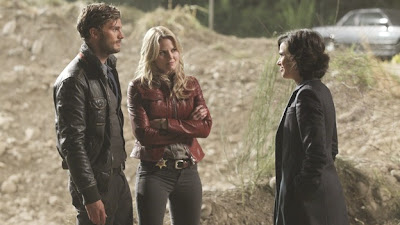 So, I've been trying to get a blog written about the fifth episode of Once Upon a Time all week, and good grief has it not cooperated with me. *sigh* Which is odd, since I really enjoyed this episode -- so let's try something novel and make this (relatively) short and sweet, shall we?
That Still Small Voice devoted itself primarily to revealing Jiminy Cricket's (Raphael Sbarge) backstory, before he became Henry's therapist and Dr. Hopper in Storybrooke. I was particularly curious about what makes the fairy tale world's most famous conscience tick, since I have been rather frustrated by his (seemingly) blind acquiesence to Regina's every whim concerning Henry's treatment. Jiminy as MAJOR parent issues. As a child he was trained to be a grifter and pickpocket, roles he reluctantly played for his controlling parents. Constantly beaten down, it is this unsavory aspect of Jiminy's past that the curse has brought forth in Storybrooke -- he knows what is right, but he lacks the courage and self-confidence to act on his conscience. So while Jiminy grows up with a completely weird fascination with crickets and understandable parent issues, I was still rather shocked that his attempt to "fix" his life involved making a deal with Rumplestiltskin (Robert Carlyle). OF COURSE this is going to backfire, as Jiminy's scummy parents pawn off the potion on an kind and unsuspecting couple and it turns them into FREAKY WOODEN PUPPETS! Guilt-ridden, Jiminy wants nothing more than to make things right for the couple's now-orphaned son (a young Gepetto! parents = puppets -- explains a lot!), so he agrees (practically begs, really) to turn into a cricket and serve as Gepetto's friend and conscience through life. This is a friendship that has translated to Storybrooke, as a now adult Gepetto (Marco in Storybrooke, played by Tony Amendola) is Dr. Hopper's closest friend.
Having made the commitment to live right in Fairy Tale Land, Dr. Hopper has to find the courage to do the whole thing all over again in Storybrooke. After Emma (Jennifer Morrison) clips on the deputy's badge, making a literal commitment to the town, there's a collapse at an old mine. It seems Emma has the curse quaking, literally. Regina (Lana Parrilla) wants to bulldoze the area, but Henry (Jared Gilmore) rightly suspects that the land is hiding a fairy tale-related secret. In a rage Regina commits the cruelest act against Henry yet -- promising to ruin Dr. Hopper if he doesn't crush Henry's "delusions," she blackmails the therapist into altering treatment to meet her whims. People, that ticked me off probably more than anything Regina's done thus far -- Henry holds a special place in my heart and it just tears me up when he gets upset on-screen. This Gilmore kid is GOOD. *wink* Henry determines to prove Dr. Hopper wrong and enters the mine -- and horrified by the danger he's put Henry in, Dr. Hopper follows and the two are caught in a cave-in, where they can have some serious therapy time and talk out their issues.
Couple of things -- one, Dr. Hopper's dog is named PONGO. This just confirms what I've thought from the beginning, that Once is just a live-action Disney show. I fully expect to see Timon and Pumbaa from The Lion King at some point (crazier things could happen, right?). Two, Regina's idea to dynamite the mine open was the DUMBEST IDEA EVER. Clearly no one in Fairy Tale Land had the necessary skills to translate into a decent real-world mining engineer/explosives expert. But it did drive home an aspect of her character that I'd forgotten about -- the cost casting this curse brought to her own life. Regina CAN'T love Henry -- she's incapable of loving anyone. So all of her grabbiness and worry about Henry are control issues, a show she puts on to mask the void in her life that she's incapable of making real, meaingful connections with those closest to her. 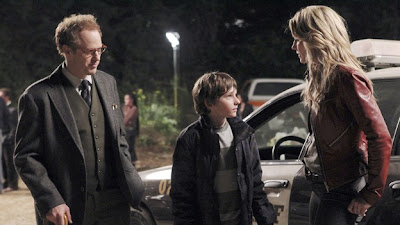 I think the thing I love most about Henry (besides the fact that Gilmore is one of the most adorable and talented child actors to grace the screen in I don't know HOW long) is his faith and never-say-die attitude. Even though he has yet to win someone over to his belief in the curse and everyone's secret identities, he refuses to give up on his belief in something more. He's that reminder of what it's like to be a child and to believe anything and everything is possible -- something that is lost to some degree or other en route to adulthood. Henry's belief in possibilities and his ability to forgive are not just endearing qualitites but an illustration, I think, of walking out a life of faith. By the end of this episode I had a lot of respect for Dr. Hopper, not only because he actually listens to Henry, but for how he stands up to Regina, daring to suggest that she might lose custody of her son someday. That, my friends, was an awesome moment.
While all of this was going on, Mary Margaret (Ginnifer Goodwin) and David a.k.a. John Doe (Josh Dallas) are all flirty and adorable, completely oblivious to the fact that their flippin' GRANDSON is stuck in a cave-in. David is completely irrisistable, and to Mary Margaret's credit she does a better job than most withstanding his considerable charms ("you're the only thing here that feels real" -- yes, I did turn into a puddle, I confess). I love how even thought Mary and David don't know why they're drawn to each other, the curse was incapable of negating the connection between them -- true love conquers all indeed! But this brings up an interesting point -- do you think that David is actually married to Kathryn (Anastasia Griffith), the blonde snob from Fairy Tale Land? Or is the marriage a fiction of the curse? I also thought it was interesting that Emma counsels Mary against getting involved with a married man -- the way she said it made me wonder if Henry was the product of her own affair with a married man, and that's why his father wasn't in the picture when she gave birth -- thoughts?
A friend of mine sent me this link on Facebook that lists some important takeaway points from a recent Entertainment Weekly article on Once. Please check out the post when you get a chance -- the two points that probably intrigue me the most are that Henry's father is important & when we meet him we might not realize his identity, and that Sheriff Graham (Jamie Dornan) is pivotal to the story. Yes,  my friends, my darling Sheriff is PIVOTAL TO THE STORY. This goes a long way towards restoring my faith in his possible redemption after last week's sleeping with the enemy revelation. *whew* Oh, and before I forget -- the episode recap on the show's website confirms what I suspected -- the piece of glass Regina tosses into the mine lands on Snow White's coffin!
Posted by Unknown at 7:17 AM

See, Ruth!? Everything might turn out "all good" with Graham yet - keep good thoughts.

I've been seeing the trailers for this show during Christmas specials and the like - and it looks so good. Cannot wait to see it on DVD.

Did you SEE what episode number 7 is called? "The Heart is a Lonely Hunter"! And it's the fall finale too!

Glad ABC is being nice and only having the show take less than a month off for Christmas.

This episode was okay. I love Mary/David story line. So sweet. :)

OKay, when I found out the dog's name was Pongo, I had some major excitement going on!!! ;-)

Tomorrow's episode is heavy on Snow White/Prince Charming....can I say that I am super excited?!

That this is a live-action Disney show occurred to me as well after this last episode. I then found out that in addition to Belle, we may also get Ariel in an upcoming episode. It's like my entire fairy-tale driven childhood is coming to live. =D

@heidenkind - THEY ARE ADORABLE.

@Charity - I am so looking forward to the Beauty & the Beast episode in particular!