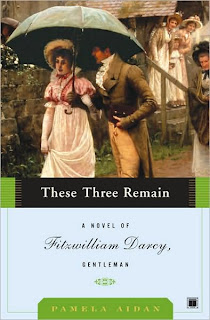 One of the most beloved romantic heroes in all of literature, Fitzwilliam Darcy remains an enigma even to Jane Austen's most devoted fans. No longer. With this concluding volume in the Fitzwilliam Darcy, Gentleman trilogy, novelist and Austen aficionada Pamela Aidan at last gives readers the man in full.

These Three Remain follows a humbled Ddarcy on the journey of self-discovery, after Elizabeth Bennet's rejection of his marriage proposal, in which he endeavors to grow into the kind of gentleman he desires to become. Happily, a chance meeting with Elizabeth during a tour of his estate in Derbyshire offers Darcy a new opportunity to press his suit, but his newfound strengths are put to the test by an old nemesis, George Wickham.

Vividly capturing the colorful historical and political milieu of the Regency era, Aidan writes in a style evocative of her literary progenitor, but with a wit and humor very much her own. While staying faithful to the people and events in Austen's original, she adds her own fascinating cast of characters, weaving a rich tapestry out of Darcy's past and present that will beguile his admirers anew.

In These Three Remain, Pamela Aidan concludes her exploration of the enigmatic Fitzwilliam Darcy's character by returning to the familiar action of the last third of Jane Austen's Pride and Prejudice. Alternately entranced and infuriated by his inexplicable attraction to Elizabeth Bennet, Darcy journeys to his aunt's home, the formidable Lady Catherine, intent on immersing himself in his work as her business advisor. However, his intentions to honor his social position and family rather than "succumb" to the dictates of his heart prove fruitless when he discovers that Elizabeth is staying in the house next door. When he confronts Elizabeth with his suit and admits his corresponding doubts and fears concerning their alliance, he is soundly rejected. His shock and pain at being so readily rebuffed by a woman whose situation in life would have only been elevated by their marriage forces him to reevaluate his every thought, action, and motivation -- his very character. Because of the astounding realization that the one person whose esteem he covets holds him in little regard, he makes it his aim to truly become a gentleman worthy of Elizabeth's affections. Darcy turns a corner here -- instead of holding his own comfort and interests as his primary concern, Darcy learns to look outside himself to see how he can best use his talents and resources to assist others. This inner transformation is put to the test when Darcy is called upon to confront his old nemesis, George Wickham, in order to save Elizabeth's family name from disgrace.

Pamela Aidan has done a worthy job of taking the world Austen created in Pride and Prejudice and expanding on it, adding depth, conflict, and character development. Indeed I didn't think it was possible for me to so thoroughly enjoy novels that dared to explore and interpret Austen's classic and dearly loved battle of the sexes. Aidan's two best additions to Austen's universe are Darcy's Shakespeare-quoting valet Fletcher, and his best friend, Lord Dyfed Brougham. Dy interests me the most, and quite frankly deserves his own book (thankfully, Aidan leaves enough loose ends to give one hope of the possibility) -- he puts me in mind of another famous and beloved literary hero, Percy Blakeney. Dy is the primary means through which Aidan incorporates the political climate of the Regency period, introducing a touch of political intrigue to the world of Pride and Prejudice. Aidan's trilogy is "fan fiction" of the highest order, a story Austen and Regency fans can savor. She succeeds in refreshing Austen's classic, infusing the familiar with new life and perspective that is both a faithful tribute and an inventive character study. Highly recommended.

Originally posted in 2007, this finishes my review of Aidan's fabulous Darcy trilogy.
Posted by Unknown at 9:08 AM

Wow, this series has really intrigued me! I can be iffy on continuations or whatever when they're not by the original author, but some are really good...Jill Paton Walsh's continuation of the Lord Peter Wimsey novels coming to mind.

"Dy interests me the most, and quite frankly deserves his own book (thankfully, Aidan leaves enough loose ends to give one hope of the possibility) -- he puts me in mind of another famous and beloved literary hero, Percy Blakeney."

I really need to read these!

@Alexandra - Well, that was weird...for some reason Blogger put your comment in spam. Anyways...what is great about this series is that it is not a continuation of P&P, but a reimagining for a different perspective -- and faithful enough to Austen's original that it works really well IMO. And Dy is SUCH a Percy Blakeney! Hope you enjoy the books!