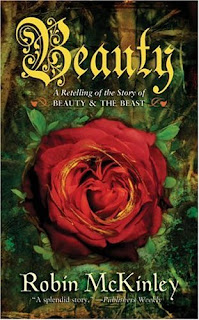 Sixteen-year-old Beauty has never liked her nickname. Thin, awkward, and undersized, with big hands and huge feet, she has always thought of herself as the plainest girl in her family -- certainly not nearly as lovely as her elder sisters, Hope and Grace. But what she lacks in looks, she makes up for in courage. When her father comes home one day with the strange tale of an enchanted castle in the wood and the terrible promise he has made to the Beast who lives there, Beauty knows what she must do. She must go to the castle and tame the Beast -- if such a thing is possible...

Here is the unusual love story of a most unlikely couple: Beauty...and the Beast.

Everyone knows the story of Beauty and the Beast, right? A beautiful girl agrees to live as an unspeakable monster's prisoner in order to save her father's life -- and an unlikely friendship blossoms into a transformative romance. For her first novel, Robin McKinley took as her basis the traditional French fairy tale and breathed fresh life into the bones of the familiar story. In McKinley's hands Beauty's adventures are transformed into a gorgeously rendered coming-of-age tale, anointing the familiar story beats with a depth and emotional resonance that have made Beauty a modern-day classic.

The youngest of three daughters of a prosperous merchant, Beauty was christened Honour at her birth, and dissatisfied with that moniker, she adopted the name of Beauty -- and the childish joke stuck. Beauty, you see, is convinced that she's anything but -- a drab sparrow when compared to the ethereal beauty of her older sisters. She takes great satisfaction in being the brains of the family, immersing herself in her studies, enjoying an idyllic, privileged life until her father's sudden reversal of fortunes sends the family reeling. Relocating to a humble cottage on the edge of a mysterious forest where all is not as it seems, and the competent Beauty leads her family in adapting to their new surroundings -- until her father crosses a Beast, leaving Beauty with no choice but to sacrifice her freedom for her father's life. Ensconced in the Beast's castle, Beauty grows to flourish with the Beast's companionship. But unable to shake the pull of her former life, Beauty must decide if she possesses enough faith in herself to follow her heart and change the course of her life forever.

I adore fairy tales and retellings in all forms, from novels and short stories to films. Somehow I missed discovering the treasure that is McKinley's Beauty until my Children's Lit classes in college -- but the genius of McKinley's retelling lies in its timelessness and ability to speak to the reader no matter their age. Beauty is a relatively straightforward retelling, retaining the traditional tale's essence and expanding the character of Beauty into a confident, perspicacious teen on the cusp of womanhood, able to see everything in the world except herself with remarkable clarity. Beauty's relationship with the Beast grows at an achingly slow burn, their affection and trust blossoming like one of the castle's enchanted roses. McKinley's sparkling, lyrical prose spins a seductive web, and Beauty's journey to love her courtly Beast and in turn accept the gift of his adoration of and faith in her transforms the fairy tale into a wholly immersive, unforgettable reading experience. McKinley would go on to take greater risks in future fairy tale re-imaginings (i.e., Rose Daughter and Spindle's End), but Beauty, her first, holds a special place in my heart for its elegant simplicity and lilting, musical prose.

I love this book! I read it for the first time a few years ago, and I remember sort of being in shock over how much I loved it. :)

I really need to reread it.

@Kristin - I ADORE this book -- thanks to it, McKinley is pretty much my gold standard when it comes to fairy tale retellings. :) Have you read her second version of the Beauty & the Beast story, Rose Daughter?

Hmmm... after "Beastly," maybe I should read this novel sometime, too. It sounds sweet. =)

I think a friend of mine read this and loved it....I should too =)

Yes, I love fairy tale retellings (Gail Garson Levine and Shannon Hale are other favorites). But no, I haven't read Rose Daughter yet! I think the only other McKinley book I've read is Spindle's End.

I do have a few of her other books, but I haven't got around to reading them yet. :)

@Rissi - Oh, definitely! I enjoyed Beastly but vastly prefer McKinley's retellings. :) And it is super sweet!!

@Kristin - I love Levine & Hale too! Definitely check out Rose Daughter sometime -- it's interesting to compare her take on Beauty and the Beast 20 years after Beauty was published. And I LOVE LOVE LOVE Spindle's End! That probably has a lot to do with Sleeping Beauty being my favorite fairy tale. :)

I know I've read this book, but I can't remember it as clearly as I would like to. I read it a few years in one of my let's grab random books off the library shelves phases. I remember really liking it though. One of those books where you finish it and shut the cover and then just let out a big sigh. :)

Ditto Jennifer--I know I've read this book, but I can't remember much about it. I'm a sucker for Beauty & the Beast retellings.

@Jennifer - I know EXACTLY what you mean, because I'm pretty sure I did the exact same thing when I closed the pages on this re-read -- let out a big sigh and smiled. :)

@heidenkind - Definitely worth revisiting (but I'm hugely biased LOL!) -- also check out Rose Daughter if you want an even more complex take on Beauty & the Beast!

So I'm going to ask you an awful question: do you like Beauty or Rose Daughter the best?

@Read the Book - Oh gosh, that is an awful question. ;) I like them both for different reasons?? (That's a cop-out, I know.) I'm re-reading Rose Daughter now, so I will try to address that in my review!