Review: An Assembly Such as This by Pamela Aidan 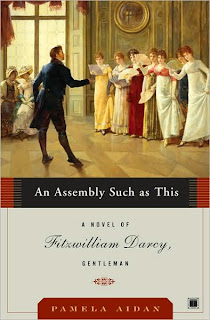 "She is tolerable; but not handsome enough to tempt me."

So begins the timeless romance of Fitzwilliam Darcy and Elizabeth Bennet in Pride and Prejudice. Jane Austen's classic novel is beloved by millions, but little is revealed in the book about the mysterious and handsome hero, Mr. Darcy. And so the question has long remained: Who is Fitzwilliam Darcy?

In An Assembly Such as This, Pamela Aidan finally answers that long-standing question. In this first book of her Fitzwilliam Darcy, Gentleman trilogy, she reintroduces us to Darcy during his visit to Hertfordshire with his friend Charles Bingley and reveals Darcy's hidden perspective on the events of Pride and Prejudice. As Darcy spends more time at Netherfield supervising Bingley and fending off Miss Bingley's persistent advances, his unwilling attraction to Elizabeth grows -- as does his concern about her relationship with his nemesis, George Wickham.

Setting the story vividly against the colorful historical and political background of the Regency, Aidan writes in a style comfortably at home with Austen but with a wit and humor very much her own. Aidan adds her own cast of fascinating characters to those in Austen's original, weaving a rich tapestry from Darcy's past and present. Austen fans and newcomers alike will love this new chapter of the most famous romance of all time.

This novel is absolutely fabulous. Aidan has succeeded in getting inside Darcy's head in a truly believable fashion that is extremely entertaining while remaining faithful to Austen's original text. Although Aidan's prose does tend to be a bit heavy on the melodramatic side of things, quite honestly that adds to the fun of reading the novel. The book starts off right at Darcy and Elizabeth's fateful meeting at the Meryton assembly, where his offhand comment of "[s]he is tolerable, but not handsome enough to tempt me" raises Elizabeth's ire and begins their epic battle of wit and wills.

By focusing on Darcy's perspective, Aidan not only gives her readers insight into his character and motivations, but also gives an enticing glimpse into the characters of his sister Georgiana and the Bingleys by fleshing out their actions and lives outside of the their appearance in the action of Pride and Prejudice. She also introduces several new characters, chief among them Darcy's indefatigable valet. Darcy's interactions with his valet are some of the highlights of the novel as they serve to really "ground" Darcy in everyday life -- without them he seems to remain untouchable and aloof.

An Assembly Such as This takes the reader through the first third of Pride and Prejudice, up to the point that Darcy and Bingley's sisters conspire to remove Charles from the influence of Jane Bennet. It's fascinating to see Aidan tackle the question of Darcy's emotions at this pivotal juncture, where he makes the choices that almost ruins his chances of happiness with Elizabeth. Aidan, though her prose tends to be melodramatic, does an excellent job of capturing the time period -- it's culture and mannerisms -- while infusing her story with subtle touches of humor. I can't recommend this book enough for any fans of Austen's Pride and Prejudice. HIGHLY recommended.

I originally reviewed this novel back in 2007. Diving a bit into the as-yet-unpublished "archives" thanks to an extraordinarily busy week! Thanks for bearing with me. :)
Posted by Unknown at 5:13 PM

Hmmm... I may have to check this out. I've often wondered about all of the novels based on "P&P," but haven't read or bought any of them.

I just read this about a month ago! I agree with your assessment--it was definitely fun and worth other people reading! I had the second one on my bedside table, but life has gotten a bit busy

Did you ever read "The Pemberley Chronicles" series? Those take place AFTER P&P ends, which I love =) If you haven't, you should!

@Rissi - I thoroughly enjoyed this trilogy! Definitely worth checking out IMO. :)

@Ella - Yay! So glad you enjoyed it too!

I've not read The Pemberley Chronicles series -- who is the author & the first book? Thanks! :)

Yay! I love these books--I'm easily excitable about them, clearly :) Great review!