With the first film releasing in six months (I can't WAIT to see a trailer), there have been a plethora of promo images popping up around the internet, so I thought it would be fun to compare the two. :)

First let's look at Snow White and the Huntsman, beginning with the official film synopsis:


In the epic action-adventure Snow White and the Huntsman, Kristen Stewart (Twilight) plays the only person in the land fairer than the evil queen (Oscar winner Charlize Theron) who is out to destroy her. But what the wicked ruler never imagined is that the one young woman threatening her reign has been training in the art of war with a huntsman (Chris Hemsworth, Thor) who was dispatched to kill her. Sam Claflin (Pirates of the Caribbean: On Stranger Tides) joins the cast as the prince long enchanted by Snow White’s beauty and power.

Sounds like a decidedly dark take on the familiar story, no? While I'm not all that thrilled with the prospect of Kristen Stewart in the lead role, perhaps she has the edge needed to make Snow White a warrior princess: 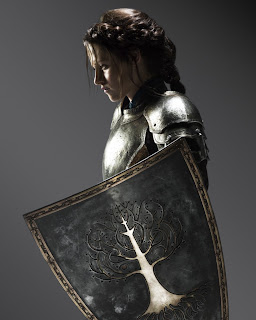 I absolutely LOVE the look of Charlize Theron as the Wicked Queen -- icy, menacing, I suspect she's relishing this role: 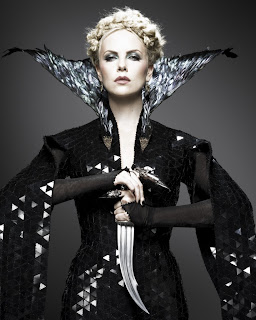 Now, the real reason I'm interested in this film are the two male leads (just being honest here). :) Chris Hemsworth wowed me in the the summer blockbuster Thor, and he looks to be exploring a grittier, more intense persona here that I can't wait to see on-screen: 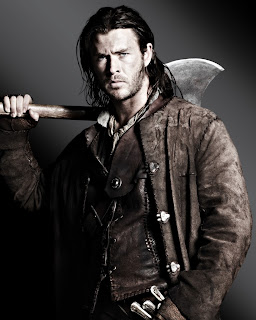 Sam Claflin as "Prince Charmont" worries me just a bit. I thought he was adorable in Pirates of the Caribbean: On Stranger Tides, but with the look he's got in this promo photo he's nearly unrecognizable...can't wait to see how this works on-screen, though! 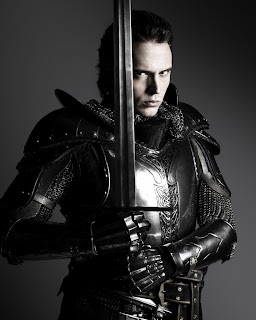 Now, as much as I love Chris Hemsworth, at this point I'm a bit more excited about the untitled Snow White project coming in March. This just looks like FUN, people. :) Here's an excerpt from the official film synopsis:

In Relativity’s Untitled Snow White starring Oscar®-winner Julia Roberts and breakout star Lily Collins (The Blind Side), an evil Queen (Roberts) steals control of a kingdom, and an exiled princess (Collins) enlists the help of seven resourceful rebels to win back her birthright in a spirited adventure comedy filled with jealousy, romance, and betrayal that will capture the imagination of audiences the world over. The film also stars Armie Hammer (The Social Network) as the object of their affection, Prince Andrew Alcott, and Nathan Lane (The Birdcage) as the hapless and bungling servant to the Queen. 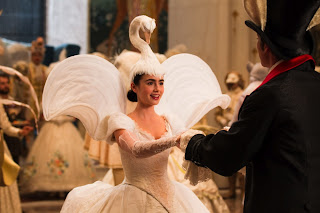 Now, I'm not familiar with Lily Collins, but I have to give her props because as far as I'm concerned, it takes real guts to wear a swan on your head and look happy about it. Here's another shot of Snow White with the dwarves: 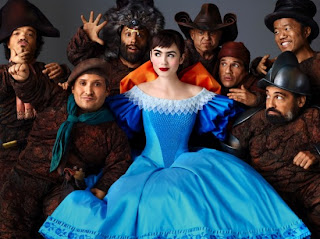 Collins appears to have the looks, youth, and spunk to carry off the role quite well, I think! And I LOVE the colors, especially the way her dress pops in contrast to the dwarves' clothing. If nothing else this film promises to be a feast for the eyes.

In a departure from her leading lady/sweetheart-type roles, Julia Roberts is playing the wicked queen -- and I think she's going to be excellent. Love her gown, love the whole "look"! 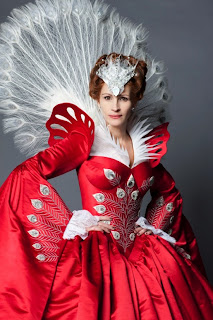 While I'm unfamiliar with Armie Hammer (LOVE that name, makes me smile!), I am quite suitably impressed with his princely look: 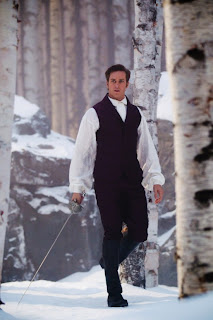 NICE. I think we need a close-up, don't you? :) (Not trying to slight Chris Hemsworth, but sadly there just aren't that many promo photos of him in his hunstman garb around...yet.) 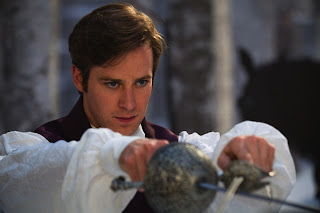 This Snow White also features Nathan Lane as the queen's lackey and Sean Bean as the king.

While I'm looking foward to both films -- my love of fairy tales knows no bounds, and I'll give just about any fresh take on a familiar classic a shot -- I have to say I'm a bit more excited about the color and sound of the March release than the more Lord of the Rings-style Huntsman project. My opinion is, of course, subject to change without notice. :) I'd love to hear your thoughts!
Posted by Unknown at 12:13 PM

Oh have you not seen the Social Network? That's where Armie Handler is from. Where he played twins. YUM. Also I believe he played in Billy Graham in a biopic?.

Though the Prince in "Snow White" looks kind of cute, I think I'm more looking forward to the untitled project simply because I prefer its cast (minus Kristen Stewart... and no, she won't have the "edge" needed for the part, she's as lifeless as a piece of flatboard) and frankly, I love "dark and edgy" stuff. I'm looking forward to the trailer -- I hope it turns up soon.

I have seen promo pictures popping up of these two--and I think I am leaning to the untitled "Snow White" better--it looks more up my alley, so to speak. And the costumes look AMAZING!

@Deborah - No, haven't seen The Social Network...I guess b/c I use the site all the time I have zero desire to watch a movie about it. ;) I did notice that Armie played Billy Graham! I totally forgot that movie even exisited, LOL!

@Charity - The cast for the Snow White 'Huntsman' pic is pretty incredible and a HUGE draw for me as well...if only there wasn't KS in there is as the weakest link! LOL! Sometimes I have to be in the right "mood" for dark/edgy stuff -- but when done well, in a thought-provoking manner -- yeah I love that too. :)

@Charleybrown - That's right, she's Phil's daughter -- I knew that! And no, haven't seen The Blind Side!

@Ella - I confess I'm glad the untitled (and COLORFUL) Snow White project is coming out first. :)

I am more keen on Tarsem's version as well. I find it ambitious that the team behind the Huntsman film have already stated that they plan for it to be a trilogy. They have their work cut out for them considering that Tarsem's film will hit theatres first!

You have not yet seen Blind Side? *shock* Unless you have a particular reason for not checking it out, it's well worth watching in my opinion :)

Oh these both look like great movies! I love fairytales too.
The Julia Roberts one looks colorful and fun and 'Snow White and the Huntsman' has a great cast. Look forward to seeing them! Thanks for posting this. :)

Awesome that you posted this, Ruth! I have been reading about both versions, but confess I am more interested in the Lily Collins/Julia Roberts version. (It will be awesome to see Lilly in something after "Blind Side.") KS just isn't that great an actress (and I am not even interested in her "break-out" role as Bella in "Twilight.") Still... I like Chris in "Thor" and Charlize, so I'll see it. I am really hoping I'll get someone to go with me to at least one (preferably the LC/JR version) because I am REALLY anxious to see them. Happy-ever-afters and fairy-tales; I love them!!

And, I agree with you, Charity: hopefully BOTH trailers will appear soon. =)

@Charleybrown - Oh, I have nothing against The Blind Side per se...I just have to confess it honestly doesn't interest me enough to want to spend 2 hours watching it. Sports movies and I have a very iffy relationship. ;)

I didn't realize that the Huntsman film team wants this to be a trilogy! Maybe they'll surprise me but...yikes, that seems like a bit much.

@Cathy - You're welcome! Can't wait till the first one debuts!

@Rissi - KS...blech. I am so with you on that point! But Chris...gosh I'm definitely going to see him, hopefully his awesomeness will outshine her. ;)

I think the Lily Collins/Julia Roberts looks way better (so far!). :) I like my fairy tales with color and humor- at least that one looks like it would be a lot more fun than the other. Look at the faces the dwarves are making!

I like fairy tale "retellings," but I cringe at the thought of always turning the princess/heroine into a warrior! Seriously, it's not necessary. And Kristen Stewart in the leading role just puts a bad taste in my mouth. But I love fairy tales so much that I might give it a try, anyway.

I couldn't remember who Kristin Stewart was at first. Can you tell I'm not a fan? :) I saw ad's for the March release (I believe it was during my catch up on Pan Am!)and it looks really good! And of course, you're usually right in your reviews, so I am sure the March release will be stellar!

@Kristin - I tend to agree with you. :) And I do know where you're coming from with the princess-turned-warrior trend...sometimes it works, and sometimes it seems just...unnecessary. Depends on how it is handled. Keep Chris H. in mind when the release of the 2nd Snow White film rolls around -- I'm sure he'll at least make it worthwhile (crosses fingers!). :)

@Terra - Haha! ;) Ok...not to get confusing here, but I think you probably saw ads for the new show 'Once Upon a Time' (Snow White theme there too!) that starts this coming Sunday. VERY similar look. And I guess time will tell if the March one is my fav. ;)

KS = I have faith.
Hemsworth = those brothers are so hot they should be illegal
Lily = wow! She looks awesome! So Audrey Hepburn
Charlize = SPOT on!

Wow, the costumes look very interesting in the untitled one! And I totally agree with the whole swan-head thing--lol!
Hm. . . I may become a fan of Armie Hammer after this. . . ;)

I can't watch anything with Kristen Stewart in it. Seriously. It's hard to even call her an actress. Which is a shame because both sound really good. It's kind of like how Keira Knightley ruined the new Pride and Prejudice. The film was ok other than her.

@Juju - You are so right about the Hemsworth brothers. And Lily really is giving off an Audrey Hepburn vibe in those photos!

@Holly - Well, I did like the Keira Knightley P&P, but I am SO in agreement with you on Kristen Stewart. The only reason I'll be seeing her film is because of Chris Hemsworth. He's worth it, right? (I have to keep telling myself that...LOL!)