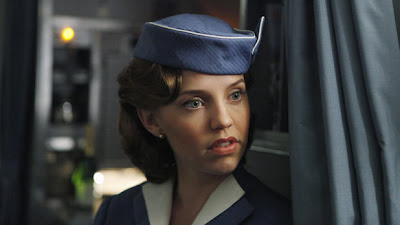 Pan Am's fourth episode was all about what makes Ted tick and the tensions simmering beneath the surface of the Cameron sisters' relationship. The Clipper Majestic is unexpectedly re-routed from Iceland to the Rangoon, all so fledgling spy Kate (Kelli Garner) can pick up a package and then deliver it on her next stop in Jakarta. It's getting to the point where Kate's -- how can I say this? -- nervousness, eagerness to prove herself, is getting on my nerves just a bit. I realize that she is experiencing a huge learning curve. But for this episode and the previous one I feel like there has been this unfortunate tendency for her to come across as whiny instead of, well, professional. However, I still really like Garner as an actress and her handle on the 1960s time period -- Kate does have an admirable amount of gumption, so I will be patient. :)

While I realize that Pan Am is filmed on backlots, etc., I loved the set up for the crew's visit to the Orient. The sunshine, the color, the sights & sounds were all gloriously realized on-screen. And for some reason this trip more than the previous really drove home for me what an opportunity a career as a Pan Am stewardess really was for women like Kate, Laura, Maggie, and Colette (Karine Vanasse). In an era when the ideal, touted in entertainment like The Donna Reed Show, was that women should aspire to be homemakers, working for Pan Am blew the doors to the world wide open for its employees. (I am in no way seeking to diminish the wife/homemaker role if that is what someone chooses -- only pointing to the fact that for a long time there were no other options.) I loved seeing Rangoon and Jakarta through Laura's (Margot Robbie) eyes -- the shyer, sheltered Cameron sister is really starting to open up and grow up thanks to the opportunities offered by her new job and budding friendship with the free-spirited Maggie (Christina Ricci).

I thought it was interesting how this storyline revealed Kate's control issues vis-a-vis Laura. When her mission seems on the verge of going sideways, she blames Laura. She wants her sister to grow up but doesn't really want to allow it -- because if she does, that has the potential to drastically alter their relationship and her identity. If she's not trailblazing, grown-up, sensible Kate -- the one who is as guilty of telling Laura what to do as their mother -- than who is she? 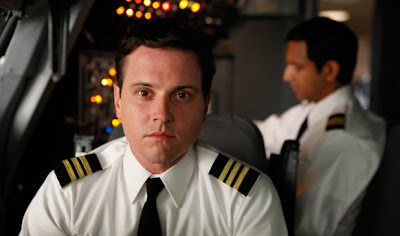 Ted (Michael Mosley) was in danger of becoming a caricature based on his behavior in the first Pan Am episodes -- he was too cocky, too self-assured, too entitled. But his bravado never really put me off (goodness I can really love a smart aleck), and in this episode we are finally treated to a revealing, and heartbreaking, glimpse into Ted's past. Ted was a Navy test pilot whose career was derailed after a crash that was blamed on pilot error (but was in reality mechanical failure). Ted's father, a wealthy government contractor, sacrificed his son's Naval pilot career (and chance to join the space program) on the altar of ambition. After THAT revelation, I just wanted to give Ted a big hug. When, with Laura's help, Ted finally gets the broken-down television to work in their Jakarta hotel so he can watch the Mercury 9 shuttle launch, the expression of childlike wonder and awe on his face is absolutely priceless -- very well played, Mosley.
I absolutely LOVED Ted and Laura's chemistry together during the television scene. She's in pajamas and curlers, fresh from an argument with Kate, and he's frustrated, pondering missed opportunities. I like how Ted so clearly likes Laura, but respects/realizes that she's perhaps not the usual kind of girl he encounters. Thus far Laura does not appear to be the type to succumb to fast talk and easy, charming manners. There's an attraction there, and the two characters seem to really like each other, but the show isn't forcing them to prematurely act on it -- and I like that, because I feel like Laura (ironically enough) could really help Ted grow up a bit.
It is also interesting how Ted wants to be respected on his own merits, -- which is why the fact that he's a copilot rankles since his experience with the Navy *should have* given him seniority over Dean (Mike Vogel). But he hasn't quite let go of the concept of favors or connections equalling advancement (even though, after our introduction to his father, we can assume Ted would be loathe to rely on him). The precedent set by Ted's privileged background runs deep in his character -- it will be interesting to see how he works through those issues. Also, I thought Dean's handling of Ted's blow-up was extremely classy.
Going forward, I hope the show continues to test the sisterly relationship between Kate and Laura, especially now that Laura's moved in with Maggie. My only concern is that I don't want to see Laura lose the sweetness that seems to be such a foundational aspect of her character as she tests her independence. Related to that, hopefully the realization that Kate has at the end of the episode, when Richard (Jeremy Davidson) gives her the "extra" photographs Laura took with the "spy camera" -- namely, that she doesn't want to alienate her sister -- will stick. I'd hate for too much tension to skew the very honest affection/frustration balance between them. (And speaking of Richard, how is Kate not just a puddle on the floor every time she has to talk with him? I LOVE HIS CHARACTER.)
So what did you all think? :)
Posted by Unknown at 10:47 AM