Inspector Lewis: The Gift of Promise

Inspector Lewis concluded its fourth series on Masterpiece Mystery last night with The Gift of Promise -- an episode mostly notable, in my opinion, for a nicely colorful revelation about Hathaway's past. :) Here's the episode summary from the PBS website:


Local businesswoman and aspiring blackmailer Andrea De Ritter asks former MI5 chief Grace Orde to sign her new memoir, Lies and Secrets, to "Leon." She adds a cryptic note of her own — "Who killed Mary?" — then dispatches the book to her intended blackmail victim, Leon Suskind. But it is Andrea who becomes the victim...of murder. Deciphering Andrea's puzzling inscription and Lies and Secrets' connection to Leon is no easy task for Lewis and Hathaway, whose suspects include everyone from gifted children to gifted liars. "Some secrets stay secret," the former spy chief tells Lewis. But as the murderer strikes again and again, poisoning and stabbing in protection of a dangerous secret, Lewis is forced to take on nothing less than the British Secret Service itself. Kevin Whately, Laurence Fox and Anna Chancellor (Pride & Prejudice) star in The Gift of Promise.

Former MI-5 spymaster Grace Orde (Cherie Lunghi) is visiting Oxford signing copies of her tell-all, cleverly titled (HA) memoir Lies and Secrets. It is no surprise that the event attracts the well-read Hathaway's (Laurence Fox) interest -- what is surprising is that he reveals to Lewis that he was "talent-spotted" for MI-5 during his Cambridge days. (Hathaway, a spy? BE STILL MY HEART.) The book signing also draws the attention of local businesswoman Andrea De Ritter (Elize du Toit) who has an entirely different purpose in mind. De Ritter runs a foundation for gifted children, facilitating their entry into institutions of higher learning such as Oxford. For someone who claims to be rather philanthropic and high-minded, De Ritter has a disturbing interest in blackmail (and barely of-age students, but that's another story), sending a copy of Orde's memoir to Leon Suskin (David Westhead), her sometime business partner, with the cryptic message "Who killed Mary?" tucked inside. After having her troubled young lover Elmo Woodeson (Matt Orton) deliver the package, De Ritter turns up brutally bludgeoned to death in her home, all signs pointing to a lovers' spat. But the late businesswoman's attempts to earn some quick cash through blackmail unleashed a web of secrets decades in the making, ones that will require every ounce of Lewis (Kevin Whately) and Hathaway's investigative prowess to unravel in as the body count threatens to tick ever higher...

I am a total sucker for anything involving spies or mysteries that uncover decades-old secrets -- the potential for drama is through the roof and the stakes just seem higher somehow -- so on that score alone, The Gift of Promise delivers in spades. The revelation that Hathaway was approached during his time at Cambridge to join MI-5 made this episode ALONE, made all the more delicious by MI-5 veteran Orde's easy recognition of Hathaway's, suitability, shall we say? :) All of the unknown about Hathaway's past is what makes him such a maddeningly attractive character, and it is revelations like this that make me want to know it all. It's a Catch-22. I'm addicted to the enigma, aren't I? *wink* 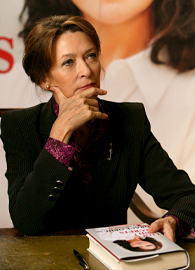 Speaking of spies, it was wonderful to see Cheri Lunghi as Grace Orde. She is SUCH a classy actress, the perfect choice for my money to convey the combination of beauty and brains and overwhelming strength of will that one imagines it took to rise to Orde's position in MI-5. I first encountered Lunghi in the Horatio Hornblower episode The Duchess and the Devil, one of my favorites in that series, memorable for the fantastic way she played off a young Ioan Gruffudd. Her most recent Masterpiece appearance was in the Miss Marple episode A Murder is Announced.

While ultimately the "twist" involving Leon Suskin and his family was a bit predictable (more on that in a moment), I really enjoyed how the Suskin family -- for all appearances quite normal and ordinary, the parents excited to be blessed with an extraordinarily smart daughter -- hid such deadly secrets beneath the veneer of upper-middle class respectability. My subconscious apparently recognized David Westhead, playing Leon Suskin, from his appearances years ago in Foyle's War and Doctor Who (a stretch, I know, but my mind has done stranger things). Recognizing his on-screen wife Judith, however, was a no-brainer. Anna Chancellor has appeared in a TON of projects, but she will always and forever be Miss Bingley from "the" 1995 Pride and Prejudice. Most recently she appeared in the six-part miniseries The Hour, a drama about a newsroom in the 1950s (which I really should blog about, because I liked it!). I'm accustomed to Chancellor playing strong-willed, brassy characters, so seeing her play a character like Judith who was practically afraid of her own shadow (not without reason, given her past), was a surprisingly welcome change.

The Suskins' daughter Zoe is played by Lucy Boynton, who doesn't have many credits to her name -- yet -- but she could be one to watch. Prior to Inspector Lewis Boynton appeared in the absolutely delightful, go-rent-it-right-now-if-you've-never-seen-it film Ballet Shoes, followed by an appearance as Margaret Dashwood in the 2008 miniseries version of Sense and Sensibility. Zoe is an interesting character -- gifted with an intelligence well beyond her years, she's more than capable of Oxford academics but somewhat at a loss when it comes to relating to her older peers. The fact that she and Hathaway seem to understand each other so well (early on she pegs him as a "gifted child," which would explain A LOT about his personality *wink*) raises a TON of interesting suppositions about his own growing-up years. I really loved watching Fox and Boynton's scenes together -- I think they played off each other really well, Fox's gravity raising Boynton's maturity, and her youthfulness reminding viewers that yes, as unbelievable as it may be Hathaway was once a child. *wink* 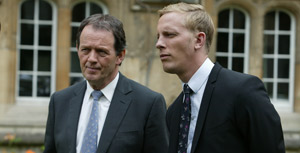 If I could delve into spoiler-rich territory for a bit, let's discuss Lewis and Hathaway taking on MI-5 and long-buried secrets about "The Irish Troubles" from the 1980s. While I suspected that Judith Suskin had a past with Zoe's tutor Donald Voss (Mark Aiken), I little suspected how deep their connection ran. I assumed that Zoe was a product of an affair Judith was desperate to hide, when in reality Zoe was caught in the dangerous middle ground between her mother's past and present. The "disconnect," if you will, between Lewis and Hathaway trying to prevent more murders while Orde sits on vital knowledge -- and says nothing, because that is what spies do, apparently -- is maddening and really well-played by all involved. It was also quite eye-opening to watch the final confrontation play out, since I'm given to understand that Oxford police don't carry guns -- so there was an extra layer of tension in Lewis and Hathaway's face-off with Voss that isn't always present in American procedurals because of the weapons "equality" if you will.

These last four episodes of Inspector Lewis have been some of the most enjoyable of the series thus far, and set the bar extraordinarily high for future installments in the series. This is largely due to the banter between Lewis and Hathaway -- they've always had a brilliant partnership, but it feels like at long last really and truly comfortable with each other, freeing each up to give as good as they take. Lewis's relationship with Hobson (Clare Holman) has really blossomed during the last two episodes. Instead of rushing things, this series hit the re-set button, and Lewis is almost, rather adorably FLIRTATIOUS. The show has always been very honest and transparent about Lewis and Hobson's respective "baggage" -- these characters aren't going to do anything lightly, or so it seems, but the fact that each gives the other a "gleam in the eye" as the saying goes makes me so flippin' HAPPY. :)

I'm looking forward to revisiting this year's episodes on DVD -- especially since I do feel the explanation of the blackmail plot and Voss's past was somewhat...lacking or rushed, is perhaps the word (stupid broadcast edits). And I eagerly anticipate Inspector Lewis's return next year -- Lewis and Hathaway have a partnership that, as far as I'm concerned, must never die. :)
Posted by Unknown at 1:06 PM

Though new to Inspector Lewis, we have so much enjoyed this season! LIke you, we suspected a connection between Voss and Zoe's mom, but they played it well enough that we kept second guessing ourselves. I LOVED the hints as to Hathaway's past. Very nicely done. And of course add in espionage and its gets really good.

Of course hubby and I keep wondering how Oxford feels about the series. Surely people don't drop like flies there in real life. :)

I was really hoping the kid did it. :p Too obvious, though...

Hathaway's explanation about how he got out of MI-5 was a little dodgy; maybe he never actually left? Dun dun dunnn! ;)

@Anne - Yay, glad you enjoyed it! Speaking of how Oxford feels about this series...well I'm discovering that the TV tradition of Oxford as "murder central," if you will, goes way back...my parents got me two sets of Inspector Morse, which I've been thoroughly enjoying. It's been a lot of fun seeing Lewis's "early" years!

@heidenkind - Yeah, probably...but they could've gone there, though. Would've been intersting to see Hathaway's reaction! ;) And that would be SO FREAKING AWESOME if Hathaway was still in MI-5.

I really enjoy your synopsis--review of this series. Thank you for your insight in to the Lewis/Hobson relationship. At the beginning of this series it seemed their relationship had gone after having come so far in the last series. I do not think Hobson carries any baggage unlike Lewis. She is a successful professional woman in her prime. We get a brief glimpse into her personal life in "Falling Darkness" She is a good friend to the two girls, tries to reconnect with Peter and smart enough not to fall for Alex. the handsome drunken womanizer. I think there has always been a spark between them, up to the script writers whether it will ignite. I like Laura, great sense of humour and love those snarky comments....which seem to have been missing this season. Although she did end it with one with one. "Dinner in the morgue"!!

@Ailsa - Thank you, and thank you so much for stopping by my blog & sharing your thoughts! I guess what I was thinking of when I referred to Hobson having some "baggage" were the revelations about her past from the 'Falling Darkness' episode. Certainly not the same as Lewis's experiences with his first wife, rather thinking along the lines that "still waters run deep" and that she has some experiences and heartache in her background too. (Hope that makes sense!). I have heard that Laura gets a lot more screentime on the DVDs -- I've only watched the first episode on DVD in its full & unedited-for-broadcast form, and I can attest to the fact that there is a major Lewis/Laura scene at the end that PBS cut for broadcast time -- which is a real shame IMO!