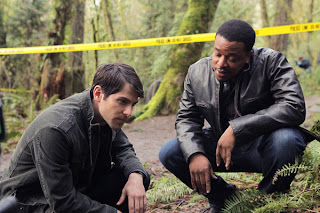 Last night NBC debuted Grimm, its own fairy tale-inspired show, one that is decidedly darker in tone than Once Upon a Time. Based on the previews alone, I would've assumed that I would've been nuts about Once, but Grimm, looking much darker, was an iffier proposition. So I was somewhat surprised to find that I thought Grimm was really a brilliant debut, turning fairy tales and police procedurals on their head, a glorious match-up that's creepy, compelling, and perhaps most surprisingly of all, really quite funny.

Detective Nick Burkhardt (David Giuntoli) is on top of the world. The recently minted homicide detective happily endures some good-natured ribbing from his partner Hank (Russell Hornsby) about believing in "happily ever afters" since he's about to propose to his girlfriend Juliette (Bitsie Tulloch). His good mood is shaken when he sees an employee of a local law office, Adalind Engel (Claire Coffee), transform into a hideous witch-like creature before his eyes. He carries the unsettling vision with him to a horrific crime scene, where they discover the dismembered (and largely consumed) body of a college student -- and no paw prints, only the impression of a boot.

Later that day, Nick is receives a surprise visit from his Aunt Marie (Kate Burton), frail and nearing the end of her life. She drops several bombshells on Nick -- he's the last of the Grimms, legendary "monster hunters" if you will, able to the disguised creatures for who they really are -- wolves, witches, etc. Nick's parents didn't die in a car wreck, they were murdered for being part of this ancient Grimm bloodline. Before she can explain further, they're attacked by a monstrous creature, and Marie whips out some incredible fight moves before Nick shoots their attacker dead (who then transforms into a perfectly normal-looking man).

When a little girl goes missing -- suspiciously wearing a red shirt like the murdered jogger -- Nick is thrust headlong into a world he never suspected existed, a world where the Brothers Grimm fairy tales are very real warnings of very real and ancient dangers. In his quest to save the latest "Little Red" from becoming a murder victim, Nick meets Monroe (Silas Weir Mitchell), a reformed "Blutbad," or "Big Bad Wolf," who controls his natural urges with a strict regiment of diet, drugs, and pilates. Monroe is Nick's "in" to the supernatural world he now faces, proof that not all the creatures the Grimms' chronicled are evil. (Side note: Robin, the missing girl, is played by Sophia Mitri Schloss -- and when she's rescued and hugs Nick's neck, the adorable factor was positively off the charts!) 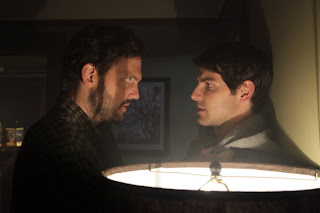 Despite the fact that the premiere episode was centered on "Little Red Riding Hood," which is like my least favorite fairy tale EVER (disgusting story warning about child predators, ick!!), I really enjoyed the Grimm debut. If I had to describe the style of this show with one phrase, I'd have to say film noir -- no, it's not black and white (ha!), but the camera angles, close-ups, the way the scenes are cut to build suspense, all of these elements work together to recall the style of classic film noirs from the 1940s and 1950s. Grimm is all about SUSPENSE and things that go "bump in the night," and on that score the premiere succeeds brilliantly. The use of light and shadow, darkness and color (especially the greens -- they are so brilliantly enhanced it lends the setting an eerie, otherworldly look -- a heightened reality, if you will).

Besides the dark, fairy tale undertones to the hour, I loved the relationships established between Nick and his investigative partners. Nick and Hank have a great "buddy chemistry" vibe between them, a solid friendship, and I look forward to seeing how Nick attempts to juggle his partnership with Hank and his newfound "creature sighting" ability. (Random aside: was anyone else besides me distracted by how much Giuntoli looks like Clark Kent?? His resemblance to every other actor who has ever played Superman is positively eerie!) Nick's "Grimm partner," Monroe, is HILARIOUS. I love how the reformed Blutbad is so deliciously droll and matter of fact about everything that is blowing Nick's mind sky-high. Mitchell's character brings some much-needed humor to the show, and I look forward to seeing how he gets roped into Nick's investigations.

If you're going to turn the typical police procedural crime show on its head and insert classic fairy tales, I don't think you could've asked for better than this premiere. They needed to go "dark," but for my money it wasn't too dark -- the show's mood and suspensful atmosphere was nicely reminscent of the "creepiness" factor found in the traditional Grimm stories. And I LOVE LOVE LOVE making the Grimms criminal profilers -- that is the perfect background you need to make your hero an investigator. Nicely done.

One more casting note -- Nick and Hank's boss, Captain Renard, is played by Sasha Roiz, fresh off a season three stint on Warehouse 13 as one of the show's big bads over the past summer. When the closing scene reveals that he's in league with the Hexenbeist (sp??), a.k.a. witch-woman Adalind, I am eager to discover what "grim" secret the seemingly conscientious and nice police chief is hiding.

After yesterday's pleasant surprise, I'm eager to see where Grimm goes next week! If you watched the premiere I'd love to hear your thoughts!
Posted by Unknown at 5:06 PM

OMG I screamed in the first 1 minute of the show (so didn't see that coming). Grimm is good but dark. I'm hooked for now :)

@Juju - I jumped on more than one occasion myself. ;) Glad you enjoyed the premiere too!

I was SO creeped out by the postman--not the woman who looked like a zombie or the reaper of Grimms but the postman! Ugh I just got the chills! LOL

It was creepy, well done, but creepy. I was so glad the World Series didn't go into extra innings, or I would have missed some or all of Grimm. I will watch again. I do remember jumping in my chair at some point, just can't remember what was happening on the screen.

Have you seen The Hour on BBC America? It is not a fairy tale oriented TV show, but suspense is rampant. I've watch the first three episodes on On Demand today and plan to watch the other three this weekend. I had to take a break from the suspense, thus I'm looking at blogs which I enjoy--yours is one of them!

I liked it. I wasn't too impressed since I've seen other shows follow a similar premise ("Supernatural," for one -- if you thought "Grimm" was scary, try that show's first three seasons... I can't watch them at night!) but I think it'll find its footing fairly fast and be a lot of fun in its first season. I'm intrigued and hooked, and eager to see where it goes.

@Renee - Oh, I know what you mean -- the postman practically had "perv" tattooed on his forehead :P

@Lynette - Thanks for sharing your thoughts on Grimm! I have watched The Hour (actually watched it as it broadcast on BBC America), and I thoroughly enjoyed it. I keep meaning to blog about it. Keep me posted on how you're liking it!

@Charity - The fairy tale connection is what drew me to Grimm -- I confess, I've never even been tempted to try out Supernatural because it just seemed too ghostly/scary, etc. It might seem like I'm being nit-picky -- but if there's a fairy tale association I guess I process scares better. :P Like you, I'm looking forward to next week!

I only saw the beginning and ending (will catch up later on the DVR), but I really liked what I saw. It was dark but still fun, and I thought the fairy tale twists were done just right. And you're totally right, the fun characters and their relationships totally made the show. There's a sort of Shawn/Gus vibe to Nick and Hank's relationship, don't you think? Although not quite as man lovey. :)

I know I am FORever saying this but... I CANNOT wait to try this one, too. =D It looks really unique - so glad you blogged about it, Ruth. =)

Supernatural is not for the faint of heart. To be honest, I'm not really a ghost kind of girl either, but... it's addictive. I like the family dynamic and once in awhile, it's fun to be scared out of your mind. =D

@heidenkind - Have you had a chance to watch the whole episode yet? I think you will LOVE it. And I hadn't gone there, but the Psych comparison is spot-on, for both Nick and Hank, and I suspect for Nick and Eddie. ;)

@Charity - I know what you mean...though I will say the "scare" levels in Grimm is probably about as dark as I'll go... :)

@RuthOne point I'd like to make, Aunt Marie didn't Say nick was the last of the Grimms but "one of the last Grimms".
As we've seen in later episodes, there are Grimms living around the world.

@Chris - Point well taken -- if memory serves I think I mention in a later post (if I didn't, big omission on my part) my desire to see the greater world of the Grimms explored, possible distant relatives of Nick's, etc. I have a feeling when I wrote this I possibly meant to specify last Grimm in his family line...but I've slept since then so who knows! Ha! ;)