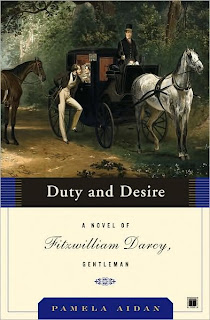 Jane Austen's classic novel Pride and Prejudice is beloved by millions, but littel is revealed in the book about the mysterious and handsome hero, Mr. Darcy. And so the question has long remained: Who is Fitzwilliam Darcy?

Pamela Aidan's trilogy finally answers that long-standing question, creating a rich parallel story that follows Darcy as he meets and falls in love with Elizabeth Bennet. Duty and Desire, the second book in the trilogy, covers the "silent time" of Austen's novel, revealing Darcy's private struggle to overcome his attraction to Elizabeth while fulfilling his roles as landlord, master, brother, and friend.

When Darcy pays a visit to an old classmate in Oxford in an attempt to shake Elizabeth from his mind, he is set up on by husband-hunting society ladies and ne'er-do-well friends from his university days, all with designs on him -- some for good and some for ill. He and his sartorial genius of a valet, Fletcher, must match wits with them all, but especially with the curious Lady Sylvanie.

Irresistibly authentic and entertaining, Duty and Desire remains true to the spirit and events of Pride and Prejudice while incorporating fascinating new characters, and is sure to dazzle Austen fans and newcomers alike.

In Duty and Desire, Pamela Aidan explores the "silent" time that Darcy absent from the narrative of Pride and Prejudice. Darcy is in his element now, among his peers of the English upper class. In an attempt to kill what he views as a totally inappropriate fascination with Elizabeth Bennet on his part, Darcy throws himself into the task of finding a "suitable" wife. He soon finds himself embroiled in a mystery with a gothic flair that is more Jane Eyre or Wuthering Heights than traditional Austenian. However, though the change in tone takes a bit of getting used to, Aidan succeeds splendidly in constructing a cracking good read that further delves into Darcy's character.

Austen, while a very saavy woman, avoided assiduously avoided politics and world events in her writing, focusing instead on the day-to-day lives of her female protagonists. Aidan expands the scope of the world Austen created in Pride and Prejudice by constructing a world that reveals the society and concerns a landed gentleman of Darcy's standing would encounter. Darcy's relationship with Georgiana is further fleshed out, as are the characters of Fletcher, his invaluable valet, and Dy Brougham, his closest friend (hint: think the Scarlet Pimpernel -- love this character, he needs his own book!). The book does suffer from some melodramatic improbabilities, even by the standards set in An Assembly Such as This, the first book of the trilogy. However Aidan has done an admirable job of *daring* to create a flesh-and-blood Darcy with passions, struggles, and a heaping helping of angst.

Hang on, I think I read this book! Except I didn't know it was part of a trilogy so I was a bit confused.

@heidenkind - Oh my goodness, that would be horribly confusing (especially since 1 & 3 in the trilogy are the best IMO).