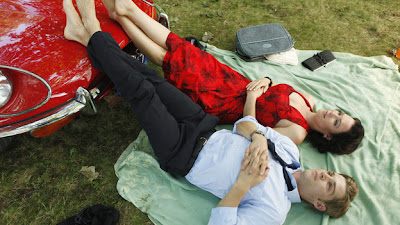 I finally caught up with this week's Pan Am episode, which took the crew to glamorous Monte Carlo where romantic complications positively exploded for many members of the Clipper Majestic crew. The crew's first stop is London, and on the flight a vivacious woman named Ginny (Erin Cummings) makes herself at home in the cockpit, chatting to the pilots and catching Dean's (Mike Vogel) eye, to the surprise of everyone. My first thought here was my oh my, how times have changed -- convenient plot devices aside, it's hard to wrap my head around the fact that anyone could simply waltz into a plane's cockpit!
Dean seems more than willing to put the disappearing Bridget behind him and pursues Ginny with an abandon that borders on uncharacteristic. Colette (Karine Vanasse) has gotten a bit of a short shrift for the last two episodes, but the wordless looks she'd cast Dean's way when he would talk to Ginny where just heartbreaking. I do hope this means that the show will continue to explore the idea of a relationship between the two of them. The crew's jaunt to Paris proved that Dean and Colette have a lot of chemistry, and I love how she seems able to read him with just a look.
There's another intriguing passenger on this slate of European flights -- Niko Lonza (Goran Visnjic), a United Nations attache from Yugoslavia. (Completely superficial moment -- was Visnjic not TO DIE FOR in those suits??) In London Kate (Kelli Garner) meets her British handler Roger (David Harbour), who informs her that Niko was the target of her next assignment. The only problem is, the handsome passenger has caught Maggie's (Christina Ricci) eye. Kate shows a lot of improvement in the spying and confidence departments in this episode (more on the latter in a minute), nicely reflected in how Roger, and later his US counterpart Richard (Jeremy Davidson) treat her. Kate's got moxie when she wants to exhibit it, and that is a must when taking on Maggie -- their romantic rivalry over Niko is HILARIOUS. 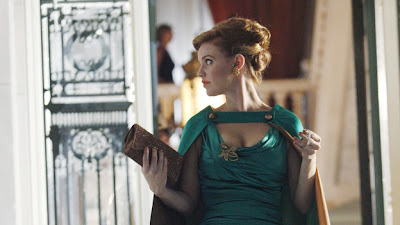 
Wasn't the dress Kate wears in this episode absolutely FABULOUS?? Oh goodness it was amazing. Garner had some nice chemistry with Visnjic -- but then again, wouldn't you have to be a block of wood not to feel something around him? Just sayin'! *wink* However, I have really mixed feelings about how Kate's mission played out. After leveraging Niko's interest in her into a date, which allowed her to obtain a Russian spy's fingerprints at the casino they visit, the two sleep together (things don't get too explicit). Hooking up with Niko wasn't strictly necessary for the mission, and sleeping with him seemed a bit out of character for Kate -- agree or disagree? Prior to this she's been such a driven straight arrow -- it sort of felt to me that much like her sister, she was testing boundaries. I'm curious to see how this relationship plays out -- by the end of the episode it is abundantly clear that Kate is emotionally invested. But once Niko finds out she was assigned to gain his interest, I predict things will blow up in a spectacular fashion.

Once again Ted (Michael Mosley) proves that he can be a real charmer when he's motivated -- and he's increasingly eager to gain Laura's (Margot Robbie) good opinion. Laura is stressed because she wants to officially end things with her former fiance Greg, and can't do that until she tracks down the engagement ring she pawned -- which was then subsequently sold. A chance encounter with Ted at Pan Am headquarters leads to the two of them tag-teaming through the New York subway system in search of the missing ring. The constant ribbing banter between the two of them cracked me up (they're clearly perfect for each other, no? *wink*). And when Ted FINALLY admits that he traded his prized Rolex for Laura's ring, I could've swooned. The man does have a heart. :)

It seems like Monte Carlo brought out the reckless side of Kate and Dean. Dean's shenanigans with Ginny could in particular have severe repercussions, since Ginny just happens to be the "companion" of Everett Henson (Scott Cohen). Henson is a Pan Am vice president with the power to make or break Dean's career -- and surprisingly, Dean doesn't seem to care. He should be warned, though -- my read on Ginny's character is that she's not principled enough to sacrifice her future and security for an amorous rendezvous.

Looking forward to this weekend's episode!
Posted by Unknown at 6:35 PM

I didn't like this episode -- the sexual shenanigans seemed out of character and frankly, tacked on just to add a bit of sex to the show. I figured it couldn't stay as clean as it was for long -- I guess this is the obligatory smut episode. =P

@Charity - Kate and Dean seemed to be acting COMPLETELY out of character. Like you I felt that the show was trying too hard tobe edgy -- the first episodes were all things considered extraordinarily clean. *sigh* My favorite aspect of this episode was the Ted/Laura storyline. I hope the show doesn't make hook-ups the "new norm."

Speaking of shows, did you watch Sanctuary last night?

Oooh! Even more "Pan Am" - I will definitely know where to come when the show releases to DVD for my "refresher" reviews! =)

So happy to know you are liking this, Ruth!

As for the content, I'd totally agree with you, Charity - shows almost always have to have at least one "token" episode that is so-not-clean. Oh, well! What is one supposed to do!?

@Rissi - Content issues in this episode notwithstanding, I'm still really enjoying this show -- definitely one of my favorites of the new fall season! :)

I just hope that they stay true to how the characters were introduced and the time period, and don't try to sex things up just because that is the "norm." *sigh*

I finally caught up on the episodes this week (I had only seen the first two), and I completely agree with everything you said. I was like, what on earth is Dean doing? I liked him a lot until this episode. Ginny seemed like bad news to me right from the beginning. And Kate's behavior also seemed really out of character.

And I also, surprisingly liked the Ted/Laura thing, too. She seems to bring out a nice side of him. :)

@Kristin - Dean and Kate apparently lost their flippin' minds this past week. Here's hoping the writers get things back on track.