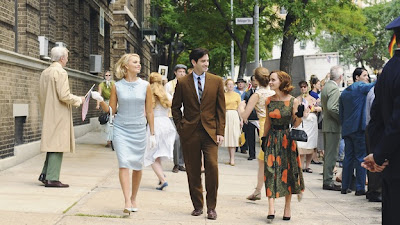 I know I'm a couple of weeks behind on my Pan Am reviews, but that doesn't mean my interest in and appreciation for the show has changed -- life's just been a little crazy. *wink* This episode marked a distinct uptick in story quality in my opinion, and made the smart decision of nixing flashback scenes to focus on the characters wholly in the present. For our third flight, the crew of the Clipper Majestic flies to Berlin, coinciding with President Kennedy's famous Berlin Wall speech. Throwing the characters in the middle of such an iconic event is a smart move, and given the politics of the 1960s one hopes the show will continue to take advantage of real history instead of relying solely on spy adventures, etc.
Kate (Kelli Garner) is tasked with purchasing a book in Berlin by her handler Richard (Jeremy Davidson). I simple shopping trip should be her easiest mission yet -- but when her contact's cover is blown, Kate has a burned spy on her hands and no way of getting her safely out of Germany. Honestly, the spy storyline was the weakest aspect of this episode, and the weakest incorporation of the spy angle thus far in the show. While on the one hand I applaud Kate's "leave no contact behind" attitude -- she does a decent job standing up to her cranky British contact Roger (David Harbour) -- her whole handling of her burned contact's future just felt a little sloppy to me, and the mission gone sideways lacked a real sense of peril.
If Kate's storyline was relatively weak, this episode delivered extraordinarily fine moments for Collette (Karine Vanasse) and Maggie (Christina Ricci). This trip marks Collette's first to Germany -- with good reason. Her coworkers don't seem to be all that interested in delving into her palpable tension at the prospect of setting foot on German soil. It's not until their arrival that Dean (Mike Vogel), in a nice follow-up to the sweet flirtation he and Collette shared in Paris, pulls Collette aside and asks for the full story -- and it is revealed that Collette was three when the Nazis took Paris, and she lost her parents to the war. The show handled her flashbacks extraordinarily well. Lost in the crush of people jockeying for position to hear Kennedy's speech, Collette nearly has a panic attack remembering the sounds associated with the horror of her childhood. This was a fantastic, heart-wrenching way to give real depth to Collette's character, and Vanasse handles the material with extraordinary sensitivity -- very well done. The moment at the end of the episode, where Collette tells Kate that she went to Berlin to forgive, but can't, because the wounds of the past hurt too much -- oh that brought tears to my eyes. This show could've kept things at a "fluffy" level, but moments of emotional resonance like this elevate the storytelling to an extra special level. 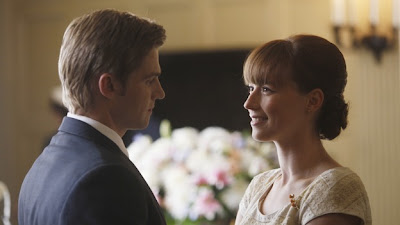 The show has never really given us the free-spirited Maggie's background, but this episode drops big clues into what makes her tick and why she's so passionate about blazing her own path in the world. It's revealed that Maggie worked as a precinct captain during Kennedy's election campaign, believes passionately in his message, and missed an opportunity to meet him and say thanks -- until Pan Am takes her to Berlin, coinciding with his visit. Maggie's unflagging enthusiasm to experience Kennedy's speech and her determination to meet him serve as a wonderful window into the "magic" of the Kennedy Camelot era. And while the scene where she practically walks up to Air Force One on the Berlin airstrip (security has really changed, hasn't it?), I really liked how although she wasn't able to actually "meet" him, they made contact -- it felt authentic, and magically possible somehow.
Co-pilot Ted (Michael Mosley) finally starts to act a bit less like a cocky jerk in this episode -- he's still nauseatingly full of himself (HA!), but I love how the show is handling his interest in Laura (Margot Robbie). When he tries to make a pass at Laura in the Berlin crowd and is rebuffed -- but not exactly discouraged -- well you can tell that Laura is the first girl in quite a while to prove immune to his "charms." (She's moral and classy! What a novelty!) I like how he doesn't push things -- there's hope for you yet, Ted. :)
If you've kept up with Pan Am, I'd love to hear your thoughts! "Ich Bin Ein Berliner" was a standout in this show's thus-far short run, thanks to a politically (and personally) charged stopover in Berlin. I'm completely addicted to the look and feel of this show -- the sets, costumes, and MUSIC are just fantastic, every scene dripping with period flavor. And I really feel like the actors have an excellent feel for the mores and attitudes of the 1960s -- I really appreciate not being thrust out of the world of the show by a 21st-century anachronism or attitude. My goal is to have posts covering episodes four and five up sometime this week.
Posted by Unknown at 5:41 PM

Glad you are still so enjoying this, Ruth. =)

@Rissi - Thank you! :) I hope the ratings stabilize/increase so this show can really find its legs long-term!

I love this show so it will probably get canceled. Just sayin' because rarely do I enjoy what everyone else likes. I really didn't like Ted the first few episodes but he's definitely growing on me as I noted on Facebook LOL! I agree with you the costumes and everything about this show is terrific. I just loved Kate's gown in last nights episode, she looked stunning!

Love "chatting" about this show with you!

This was my favorite episode so far, by far, but I'm just about to sit down and watch 1.5 so we'll see. I liked 1.4 but it didn't pluck the heart strings like the Berlin ep did. Wow. But then, it was WWII history/trauma/drama and that always resonates with me.

Ruth, OT, but did you watch Once Upon a Time? Watched the pilot over lunch today. I like. I think.

Here's a question for you--is Jeremy Davidson in it much? I ask because he stars on one of my favorite TV shows (Army Wives) and I would hate to see him leave there.....;-) I don't know how someone can do two recurring characters at once!

But I am so glad you are enjoying this. That is how I am with "Revenge," my one new show...And I might be giving "Once Upon a Time" a try....we will see

@Renee - Generally I feel the same way. I can remember when Castle started fearing it was doomed because I loved it so much. ;) I would LOVE for this show to get at least one full season, keeping my fingers crossed! I read that it enjoyed a bit of a ratings uptick thanks to Once Upon a Tim bringing in big numbers for ABC...so I'm remaining hopeful. And I LOVE talking about this show too, so thank you for your comments!

@Lori - We are on the same page, my friend - the way the show handled the aftermath of WWII on Collette's life was masterfully done! And I DID watch Once Upon a Time! And I really want to try to blog about it -- we'll see how this week goes! :)

@Ella - Jeremy Davidson doesn't have a huge role in the series thus far -- usually limited to one or two scenes where he gives Kate her assignment. I'd LOVE for his role to be expanded, but even if the show really takes off I don't think he'd be full-time.

As I told Lori -- watched the Pilot ep for Once Upon a Time, LOVED it...will try to blog about it this week!

I love the look and feel. It makes me expect to walk out my front door and see that world instead of the current dismal state of affairs. Not that, that time was any easier politically, but it seemed more hopeful somehow. I LOVE Jeremy Davidson in this..I'm also a fan of Army Wives Ella! I wait for scenes with him. Dreamy...

I love this show! I started watching it because you said it was good, Ruth :)

I felt like this episode deepened the characters stories and drew you in more. I loved how Laura rejected Ted, I love how it showed his past and how he got to be a Pan Am pilot. He is a jerk, but now he isn't as much of a jerk as he used to be.

If this gets canceled, I will be so sad!

@Leah - I know what you mean, I could use some rose-colored Pan Am-era glasses occasionally through which I could look at the world... *sigh*

I really should watch Army Wives...I only ever seem to catch random episodes. I had no idea Jeremy Davidson was a regular until Ella mentioned it...

@Terra - I'm so happy you're enjoying this show, girl! You've got to let me know what you thought of episodes four and five when you get the chance. As I was telling someone else in the comments on episode five, I LOVE who Ted is when he's with Laura -- so sweet and very impressive. :)