Review: Baby, It's Cold Outside by Susan May Warren 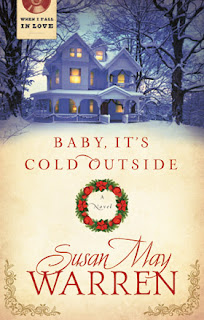 Five strangers with broken hearts. One raging blizzard. Baby, it's cold outside!

Dottie Morgan has no desire to share her home -- or her heart -- this Christmas. After all, her holiday spirit froze over when she lost her son in World War II. But when the blizzard of the decade descends on Frost, Minnesota, trapping Dottie in her home with four near strangers, she discovers that opening her door might also open her heart to a miracle...and a new reason to celebrate Christmas.

When war claimed her only son Nelson, Dottie Morgan grew cold and brittle, the physical embodiment of the name of her hometown of Frost, Minnesota. Nelson had been her salvation, a sign of redemption and forgiveness for the youthful folly that caused her to spurn her childhood sweetheart Gordy's declarations of love for adventure with a ne'er do well thug. With crushed dreams and a hopeless outlook, Dottie resigns herself to another isolated Christmas and a lonely future, sure that God and mankind has forgotten her -- but more than that, positive that she doesn't deserve to be found. But when a fast-moving snowstorm brings four lonely souls to her door for shelter, Dottie discovers that not only she stands in desperate need of a new beginning. Gordy hopes for one last chance to rekindle his romance with Dottie. Violet, a tomboy who understands cars better than men, served in the WAACs and now struggles to adjust to civilian life and her family's expectations. Jake, a handsome stranger newly-arrived in town, hopes for redemption and carries with him news that could destroy Violet's dreams. And Arnie, a lost and lonely boy, longs to be a hero for his single mother, their family bereft by his father's wartime death. Isolated in Dottie's Storm House, these five bruised and wounded near-strangers are forced to confront their deepest fears for a chance to grasp hold of the promise delivered to the world anew each Christmas -- hope birthed in a world craving a second chance at redemption.

Oh how I adored this book. Baby, It's Cold Outside is the perfect Christmas read, brimming with the warmth and nostalgia of the late 1940s, made all the richer by Warren's trademark and skillful handling of emotional issues that cut to the core of what it means to be a believer in a fallen world. This novel is saturated with hope and spiritual truths, capable of thawing the most jaded of hearts if you'll but crack open the door, much like Dottie does, and listen to the whispered promise that no matter where you're at, no matter the pain,
God has not forsaken you. With Dottie as the centerpoint, Warren speaks strongly to the idea of what makes a family -- not just those one is related to by blood, but family forged by the fires of shared experiences and faith. It's a powerful reminder to not overlook or forsake those who are different or whom tragedy has set apart from the "norm." The flirtatious song from which the novel takes its title dually speaks to the sweet, heart-stopping romances that Warren spins on the page, and on a deeper level as an invitation to take shelter in God's never-failing promises of redemption and second chances.

I am admittedly biased towards novels centered around World War II and its aftermath -- the 1940s is a decade rich with history and change, heartbreak and hope. Warren is adept at bringing this generation to life, with characters that feel wholly authentic to the time period, but vibrant and relatable thanks to their struggles with hopes and heartaches that are timeless and define what it means to be human. It seems that the 1940s is where Warren really shines when writing historicals. She has a gift for sprinkling her narrative with little details that bring the time period to life, from descriptions of clothing and food to the music and expressions that bring the characters and the time period to sparkling life on the page. And setting the story during the 1949 holidays is a well-played stroke of genius -- enough time has passed for the reality of the war's aftermath to settle into the characters' lives, and on the cusp of a new decade's worth of promise, Warren posits a question for the principle players, and by extension the reader: will the tragedy and heartbreak of the past define one's future, or will one allow God to bring beauty and hope forth from the ash heaps of shattered dreams?

I have to briefly speak to Violet and Jake's blossoming romance, as since it begins with letters it is one of my favorite storylines in the novel. With echoes of You've Got Mail (perhaps a more apt comparison would be In the Good Old Summertime, the musical remake of The Shop Around the Corner that released in 1949), Violet and Jake fell in love through letters, where the worst hurts of their wartime experiences were laid bare (only Warren adds the delicious twist of "stolen" identities). In the Storm House, they're faced with the choice -- is the hope of love worth the risk of possible rejection? The risk of being truly known? Warren writes some of the best, most sizzling romances in the business. The tension between Jake and Violet sends sparks off the page, and Jake's quiet heroism and vulnerability will melt your heart -- Warren's outdone herself with this hero. :)

More than a passing seasonal treat, Baby, It's Cold Outside is a novel saturated with rich spiritual truths and overflowing with the beauty of grace. Warren's novels never seem to fail to meet me where I'm at and encourage me when I need it most. The characters within this novel's pages are so heart-breakingly authentic, so fully-realized on the page they'll become your friends, and if you're like me you'll be loathe to finish the book's final pages. Warren's story will weave its way into your heart, leaving you warm with its gorgeously rendered illustration of the meaning of Christmas -- redemption for a fallen world, hope to broken souls. Like so many of Warren's books, this one is a gift to treasure.
Posted by Unknown at 1:02 PM

Glad you enjoyed this, Ruth! =)

Terrific review. I enjoyed this one as well. It took me awhile to warm up to Dottie, but she really grew on me as her heart softened. Such a sweet story.