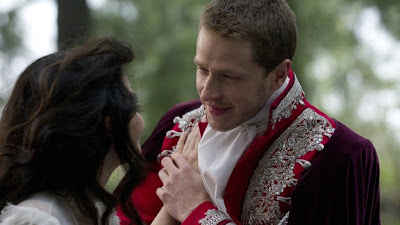 ABC's Once Upon a Time was one of the most hotly anticipated (or perhaps I should say well-advertised?) shows of the new fall season that finally debuted this past Sunday. I've mentioned many times here how much I adore fairy tales, traditional and reimagined, and Once seemed guaranteed to suit my tastes. Needless to say, despite some reservations -- or perhaps I should say questions? -- about how the high concept of this show will play out, I thoroughly enjoyed the premiere. So let's talk. :)

Fairy Tale Land is a place renowned for its happy endings, and as the show opens we get to witness one of the most famous play out -- Prince Charming (Josh Dallas) awakening Snow White (Ginnifer Goodwin) with true love's kiss. Their happily ever after is tarnished by the promise of the Evil Queen (Lana Parrilla), who threatens that she will destroy the happy endings of every person who stands in her way. Cut to the "real world" where Emma Swann (Jennifer Morrison), a tough-as-nails bail bondswoman catching a client on what just happens to be her birthday. She's a loner, and while later blowing out a birthday candle on her celebratory cupcake (NICELY staged scene!), a young boy shows up on her doorstep. The boy is Henry (Jared Gilmore), who turns out to be the baby she'd given up for adoption ten years ago. Henry begs Emma to return with him to his hometown of Storybrooke, Maine. Much to Emma's chagrin, Henry is convinced that every story in his precious book of fairy tales is true, and that only Emma can help the citizens of Storybrooke remember who they truly are -- denizens of of Fairy Tale Land who were robbed of their happy endings by his evil adoptive mother Regina, the town mayor.

This episode introduces several of the main fairy tale characters and their real-world counterparts, as the narrative cuts between Emma and Henry's present and "flashback" scenes revealing how the Evil Queen's curse came to be. For the most part I absolutely loved the look of this show, in particular the Fairy Tale Land scenes -- the colors, the "richness" of the fabrics and set pieces were a visual feast! There is some dicey CGI in the Fairy Tale Land exterior scenes that just screamed "fake," which was unfortunate, but for the most part everything worked beautifully setting up the difference between the real world and the fairy tale one. (I just have to say, though, the Queen's curse was a friggin' SMOKE MONSTER?? Really? That was INCREDIBLY lame and looked just terrible on-screen. Bah...)

I loved Goodwin and Dallas as Snow White and Prince Charming -- Goodwin's looks fit the character perfectly, and she's capable of expressing this wide-eyed sincerity that just seems to scream "Snow White" to me, while Dallas -- well I'd be hard-pressed to ask for a more dashing Prince. :) Their heartbreak over having to sacrifice twenty-eight years together, until their daughter can break the Queen's curse -- or so Rumplestiltskin (Robert Carlyle) promises -- is played out with a heart-rending, sense of the epic that lends the concept of this show a cinematic flair. And the Prince's dramatic swordfight while holding his baby daughter was EPIC. Absolutely loved it. 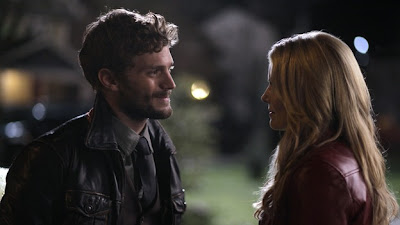 Likewise I was extremely impressed with Morrison's performance as Emma. Her past as a supposedly abandoned orphan, her upbringing grounded in the harsh reality of the foster care system, is going to make Henry's task to open her eyes to fairy tales-as-reality quite the tall order. Gilmore is absolutely ADORABLE as Henry. He has all the prepossession of a mini adult and all the hopefulness and simple faith of a child. It is an extraordinarily winsome combination, and its easy to see why Emma finds herself drawn  to him inspite of his outlandish claims. I really look forward to seeing how their relationship develops.

This episode also gives us brief introductions to fairy tale/real world Gepetto/Marco (Tony Amendola), dwarf Grumpy/Leroy (Lee Arenberg), "psychiatrist" Jiminy Cricket/Archie (Raphael Sbarge), and the delightfully cranky Granny (Beverly Elliott) and her granddaughter Ruby (Meghan Ory). Presumably the show plans to introduce more fairy tale characters from the legends -- perhaps specifically the Disney canon, given the dwarves' names? -- throughout the show's run. My concern, if that's the right word for it, is that the constant back-and-forth between real world Storybrooke and Fairy Tale Land, where we'll get the classic characters' backstories, will get old really fast. It is not a formula that suggests it will lend itself to forward momentum narritive-wise. I am, however, open to being persuaded otherwise. :)

Some of Storybrooke's residents are not so clearly identifiable -- the adorable Sheriff Graham (Jamie Dornan), for instance. Do you think he's the Queen's Huntsman -- and therefore I can cling to the hope that he's one of the good guys? Or, given that Emma sees a wolf on the road before she wrecks her car trying to leave town, do you think there's a chance Graham is the the Big Bad Wolf? This leads to another question -- does Rumplestiltskin, a.k.a. Mr. Gold in Storybrooke, recognize Emma because he's in league with the Evil Queen? And did the Evil Queen somehow "know" that Henry was Snow White's grandson? Or was did that just end up being a coincidence? SO MANY QUESTIONS! *wink*

So, if you watched Once Upon a Time, I'd love to hear your thoughts on its premiere. Was it everything you'd hoped, and what do you hope from future episodes? I'd love to discuss theories for how this Storybrooke mess is going to play out. :)
Posted by Unknown at 12:39 PM

I've not seen this one either, Ruth, but it is certainly on my to-see list of 2011 TV shows. Cannot wait to check it out. =D

It was too cool! I can't wait for the second episode tomorrow to find out what happens next! Great review btw. ;)

I just watched this last night (catching up on Pan Am and this one! :), and I was pretty impressed.

I agree about the smoke monster curse. Smoke monsters have been way overdone! It was weird/cheesy enough on Lost. Then Narnia, now this? Anyway...:)

And I laughed out loud at your mention of the sword fight with the baby. I, too, thought that it had to be one of the coolest things I've ever seen. :) And I'm so glad that he didn't die and is still alive in the modern part. Mostly alive?

I hope the show will turn out alright. I still can't wrap my head around the fact that Snow White's daughter is pretty much the same age as her! Right? How is that supposed to work out when the situation is straightened out?

I completely agree with your thoughts on the subject. I missed the first ten minutes of the show by accident, so I kind of had to figure out what was happening up to that point, but once I got it I was pretty excited about it. The back and forth from real world to fairy tale was a bit jumpy and I wonder if that will be a constant in upcoming episodes. Otherwise I liked it, and it was fun to try to figure out some of the characters' fairy tale counterparts. I'm definitely interested to see how this goes.

Oh, and I am so curious to know if the Witch knows who Emma is! It was so hard to tell if she did or didn't! That alone will keep me watching.

@Kristin -- Isn't that (Snow White being the same age as Emma) because time stopped? Remember how Henry saide the clock in Storybrooke never worked, and then when Emma checks in to the inn, it starts moving? I don't know...definitely intriguing.

@Elaine - Thank you! Glad you enjoyed Once's premiere as well!

Time can't speed up too quickly or Ginnifer Goodwin will turn ancient before our eyes! ;) It is weird, though, looking at Snow, Emma, and Henry and thinking "this is supposed to be three generations of the same family." WILD.

@Jennifer - Agreed - they kept several things nicely ambivalent in this episode that will keep me watching for quite a while. I just hope the showrunners have a master plan, you know?

Is the sheriff bad? What did Granny mean by, "he owns the town"? Are Rump and the Evil Queen working together? Am I the only one that thinks Red Riding Hood looks like trouble?

@Juju - I think the Sheriff is just adorable, so I really really want him to be a good guy -- but who knows how this will play out? And I think it very likely that Rumplestiltskin made some sort of deal with the Evil Queen just prior to the curse being unleashed. AND...oh my goodness yes, Red Riding Hood (or shawl, in this case) definitely looks like trouble!

Five minutes in, I thought "this is sooo cheesy," but it certainly improved as it went on. I hope it gets enough ratings to warrant continuing, since I'm curious to see where it goes. I really liked everything in "our time" -- the story book time took a little more getting used to. =)

@Charity - Fairy Tale Land is definitely guilty of some awful CGI...but the costumes are pretty. :) I read on TVLine that the premiere copped huge ratings, so I think it will really have to tank before ABC would look at axing it.

I meant to get caught up on this via HULU....but just haven't gotten around it yet. I really want to. Jennifer Morrison was someone that I loved in HOUSE, and I miss her on something still airing, so I might give it a try for her alone.

But I do still love fairy tales -D

To be honest, I was kind of disappointed. I thought it was draggy and like Charity I thought the beginning was way cheesy. It just didn't click for me, although I loved Josh Dallas as the Prince. Perfect casting. Have you seen him in Thor? For the first half of the movie I thought he was Cary Elwes.

I'll give ONCE a few episodes, but right now I have nooo idea where it's going and I really don't care. I felt the same way about the season premier of LOST, though, so... I'll wait until it comes out on DVD and watch it then? ;)

I watched it and was quite interested in the concept for it. I too love fairy tales. And I wasn't sure if you or anyone else noticed it, but it has sort of a Narnia theme...Like Emma is their rescuer against the Witch. Just as the Pevensie children were against the White Witch.

Anyway, I enjoyed it and already have it DVR'd for tonight. Curious as to what might happen next.

@Ella - I'm not 100% sold (yet) on where this show is going, but I will say I am really liking Jennifer Morrison's character, for what that's worth. :)

@heidenkind - I know what you mean -- I like this, but I was underwhelmed after all the hype. And you are SO right about Josh Dallas resembling Cary Elwes in Thor!!!

I liked the 2nd episode (blog to come!), but I'm still not sold on the direction of the show -- it feels like its going to run out of steam by the end of the first season.

@Sean - Your Narnia comparison is interesting! I hadn't gone there but I can see where you're coming from!