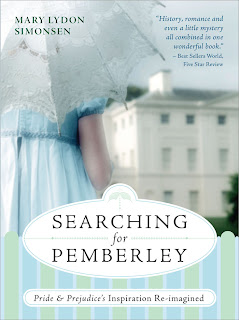 Searching for Pemberley
By: Mary Lydon Simonsen
Publisher: Sourcebooks
ISBN: 1402224397
About the book:
Maggie went in search of a love story, but she never expected to find her own…
Desperate to escape her life in a small Pennsylvania mining town, Maggie Joyce accepts a job in post-World War II London, hoping to find adventure. While touring Derbyshire, she stumbles upon the stately Montclair, rumored by locals to be the inspiration for Pemberley, the centerpiece of Jane Austen’s beloved Pride and Prejudice.
Determined to discover the truth behind the rumors, Maggie embarks on a journey through the letters and journals of Montclair’s former owners, the Lacey family, searching for signs of Darcy and Elizabeth.
But when the search introduces her to both a dashing American pilot and a handsome descendant of the "Darcy" line, Maggie must decide how her own love story will end…
Review:
Following the end of World War II, twenty-two year old Maggie Joyce, desperate not to return to a dead-end future in her mining hometown in Pennsylvania, accepts a job in post-war Europe with the Army that sees her transferred to London. While touring Montclair, a grand country estate, Maggie is astonished to recognize striking similarities between the story of estate's ancestral owners, William and Elizabeth Lacey, and Pride and Prejudice, her favorite of Jane Austen's novels. The idea that Elizabeth Bennet and Fitzwilliam Darcy were based on real people is too tantalizing to resist, and Maggie embarks on a journey to sift fact from fiction, hoping to learn the truth behind one of literature's most enduring love stories. Maggie's "guide" into the real Elizabeth and Darcy's past are Beth and Jack Crowell, whose relation to the subject of Austen's novel is closer than Maggie could've dreamed, and provide a fascinating glimpse into the war-torn history of one of Britain's premiere families. Along the way the once lovelorn Maggie finds herself torn between two men, and faced with the chance to determine her own postwar future, Maggie must decide if taking a chance on her own real-life Darcy is worth the risk of leaving behind the life she was raised to know.
The basic premise of this novel is fascinating -- I love the idea that one of my favorite fictional couples could've been real individuals, and the idea promises rich fodder for a devotee of Pride and Prejudice. While I have no doubt that Elizabeth and Darcy were wholly products of Austen's considerable talents and imaginative genius, the idea of a real-life Pride and Prejudice "treasure hunt" is an appealing fiction, and as such I found myself relating to Maggie's enthusiasm in her quest to discover the real Elizabeth and Darcy -- a literary archaelogical expedition of the highest order. The problems come in the execution of this premise -- the storytelling format consists mainly of large "information dumps," with pages of dialogue where a character shares research with Maggie, or pages of prose where she details her latest discoveries. The result is a lengthy tome that reads more like research thesis notes than a novel. There is very little character development, Simonsen opting instead to showcase research and history -- and the only reason this works to some degree for me is because I appreciate the basic premise of her story.
I didn't expect this novel to provide a not uneffective analysis of the cost of war on those who survive combat to return to civilian life. Through Jack and Beth's reminscences and the stories of Maggie's love interests, Simonsen explores the terrible toll both world wars took on society as a whole, particularly those who survived to return home to "normal" life. At first blush the juxtaposition of a late 18th-century love story and life in postwar Britain seems most unlikely, but in some weird way it works -- Maggie's research into the Laceys' past helps her find her footing in a postwar society, torn between the wounds of war and hope of peacetime. The "upstairs/downstairs" dynamic of Beth and Jack's love story is particularly timely, given the resurgence of interest in the pre-World War I time period thanks to shows like Downton Abbey.
Simonsen clearly has a passion for history and her love of research, both Georgian and World War II era, shines in this reimagining of Austen's inspiration for Pride and Prejudice. This novel is ALL telling and little to no showing, but despite the novel's often awkward and stilted narrative style, there was a spark within that kept me turning pages -- perhaps it was recognizing in Simonsen a fellow Austen aficionada. With more attention to character development and action instead of packing in every single bit of research in pages-long information dumps, Searching for Pemberley reveals the potential of an author whose passion for history and the classics can't help but be appreciated.
Posted by Unknown at 4:53 PM

What an interesting premise and combination of eras. I love a good Austen inspired book with some meat on its bones. Some have been a little...um...more disapointing than others ;) I'll have to see if this one shows up at the library!

I haven't had a lot of good luck with P&P wannabe sequels/rewrites. Most are always disappointing. This one does sound like a great premise though. It has me intrigued, even with the disappointments. I think I'll see if my library has it too.
2 Kids and Tired Books

@Holly - Interesting premise, yes, but IMO it falters in its execution. However, in a weird unexpected way I enjoyed it. :)