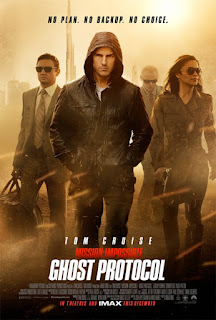 I suppose whether or not one likes the Mission: Impossible films depends largely on how one feels about Tom Cruise. While not an avid fan of the actor per se, I love this series of films and to Cruise's credit his penchant for gazing with steely-eyed intensity at the camera works really well for the role of IMF agent extraordinaire Ethan Hunt. The Mission movies feed my desire to see slick spy capers on the big screen, and after giving it some thought it is possible that Ghost Protocol is the best film in the series to date.
It has been five years since we last saw Ethan Hunt (Tom Cruise) walk off into the sunset with his new wife Julia (Michelle Monaghan), leaving the future of the film franchise in some doubt -- now that the hero had seemingly achieved some measure of happiness in his personal life, would he return to work? The answer, thankfully, is HECK YES. The film opens with IMF agent Jane Carter (Paula Patton) and newly-promoted field agent Benji Dunn (Simon Pegg, a carryover from the third film) breaking Hunt and his source, Bogdan (Miraj Grbic), out of a Moscow prison. The IMF want Hunt to help save Carter's previous mission which had gone horribly wrong, when her fellow agent and lover Trevor Hanaway (LOST's Josh Hollaway) was killed by Sabine Moreau (Lea Seydoux), who stole the nuclear launch codes he'd intercepted and plans to sell them to "Cobalt" (Michael Nyqvist), a nutcase. Hunt is viewed as something of a loose cannon by this new "team," since he was in prison for essentially going rogue and killing the Serbian hit squad responsible for the death of his wife (*sadface*).
I was so happy to see Benji return to the series -- Pegg is HILARIOUS and plays the computer geek thrilled to "see some action" in the field to perfection. I loved Benji's non-stop banter, in-the-field jitters, and Hunt's palpable exasperation with him -- the two play off each other quite well. Patton's Jane Carter is perhaps the best-realized female agent in the film series to date -- my favorite at any rate. She's fiesty, capable, and determined, and more than the equal of her male counterparts. Female spies in franchises like this can all too easily fall into the trap of being just a pretty face, rather empty-headed, but Carter avoids that trap by possessing an impressive drive and determination to succeed, thanks to Trevor's murder. 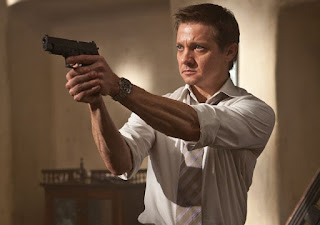 But by far my favorite cast addition is intelligence analyst William Brandt (Jeremy Renner), who falls in with the team quite by accident after the IMF is disavowed and blamed for a bombing at the Kremlin, and must go on the run to prove themselves innocent and stop the aforementioned Cobalt nutcase from starting a nuclear war. I've loved Renner since his work on the short-lived TV show The Unusuals, and 2012 promises to be a banner year for him with appearances in The Avengers and The Bourne Legacy. All is not as it seems with Brandt, who carries a terrible secret that could shatter his tenuous relationship with Hunt. Renner was just MADE for this type of role -- he's got the looks and physicality and also the humor, the snarkiness to make a character like Brandt appealing and quite frankly sheer fun to watch. If there's a fifth Mission: Impossible film -- and it seems likely, given the success of this installment -- if most or all of the team of Pegg, Patton, and Renner sign on to support Cruise I'm all for the idea (more on that in a moment).
I think a great deal of the credit for revitilizing the franchise in this manner has to go to director Brad Bird, who prior to this was known for directing films like The Incredibles. There's a sense of energy and pacing to Ghost Protocol that reminds me of the Pixar superhero family, and a family of sorts is indeed what this movie creates between the IMF team members. They quarrel and argue and question each other, but when push comes to shove they are there for each other. To paraphrase a line I read in an article somewhere about the film, Ghost isn't Tom Cruise vs. the world, this is a genuine TEAM effort. And getting invested in that team, and their relationships with each other, and enjoying the on-screen dynamic -- that is a large part of what makes this movie work so extraordinarily well.
Of course there are spectacular action sequences and cool spy gadgets -- it just wouldn't be a Mission: Impossible movie without those "amazing" (read: ridiculously convenient) masks the team creates to impersonate people (though in a good-natured jab at the previous films, the masks don't work, leaving the team to rely on cool bravado to sell their con), as well as a host of new technology -- my favorite being the contact lens that serves as a camera, that sends copies to a wireless printer in a special briefcase. Seriously, I WANT ONE. I have no idea WHY, I just do. *wink* 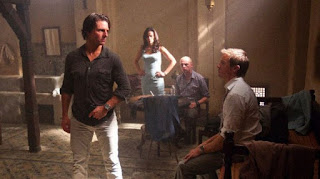 In addition to the spy "toys," this film is chock-full of arguably some of the most spectacular action sequences in the franchise. After the team's attempt to retrieve a file on the elusive Cobalt from the Kremlin goes south and the building explodes, I thought that could possibly be the film's high-water mark -- and was I ever wrong. The trailers give you a glimpse of Cruise's high-wire act climbing the Burj Khalifa -- the world's tallest skyscraper -- in Dubai in his best Spiderman impression. The visuals in that scene are just spectacular, and the tension is superbly handled. I love that the team never gives you a sense during this or any other moment in the film that they are cocky and overly confident -- this time around there's a renewed sense of fallibility among Cruise & company -- as the audience we "know" how things are supposed to work out, so full credit to the script, cast, and director for maintaining tension and excitement throughout. Each member of this core team knows they are riding a high-wire act, each has experienced or witnessed the horrible cost of a mission gone wrong -- the stakes are high and the film keeps viewers invested and interested in the outcome. And I didn't even talk about Hunt's pursuit of Cobalt in the middle of a sandstorm... :)
Couple of quick notes -- it was terrific to see Tom Wilkinson make a brief appearance as the ill-fated IMF Secretary. It was also WONDERFUL to see longtime Hunt cohort Luther Stickell (Ving Rhames) make a brief cameo at the film's conclusion -- if he can be persuaded to come back for a fifth film, that would pretty much make things perfect. Music-wise Michael Giacchino delivers perhaps an even better score than his first outing in the series for the third M:I film. Giacchino also has a history of working with director Bird on The Incredibles, and one wonders if this similar superhero/action-themed collaboration inspired the energy of his  newest offering.
In a way that's somewhat reminscent of the "realism" Daniel Craig brought to the character of James Bond in Casino Royale, Ghost Protocol reminds viewers that the IMF agents accomplishing these impossible feats are very human. I can't remember Ethan Hunt ever taking quite as much of a pounding as he does in this latest installment. And it isn't just the reminder that characters like Ethan aren't immune to physical harm -- this script adds layers of emotional resonance that in the end makes this particular grouping of IMF agents people you care about. This is perhaps best summed up at the movie's conclusion, when Hunt (SPOILER ALERT) admits to Brandt that his wife is, in fact, alive. There's two things at play here that made me love that moment -- one, Hunt recognizing himself in Brandt and realizing just how much it would mean to know the truth behind the failed mission in Croatia, and two, witnessing Hunt's faithfulness to his wife and seeing just how much he loves her. Yes, I know I am a total romantic sap but GAH!! -- that moment killed me it was so perfect.
For sheer escapist fun Ghost Protocol can't be beat. Kudos to the entire production team for refreshing a franchise that could've gotten stale if filmmakers had continued to insist on relying on Cruise's star power alone. This team works, and as the main thread that has run throughout the film franchise, Cruise plays off the newbies really well. :)
Posted by Unknown at 3:42 PM

I always enjoy Mission:Impossible movies more than I think I will. Of course being a teen in the 80s, I do have an affinity for Tom Cruise, in spite of his weirdness. (Although knowing my age--and his--its not quite the same as when I was a teen!) Anyway, I think what I love most is the humor in the dialogue. Of course I also find myself laughing at the parts that aren't supposed to be funny--scenes like walking up and down the windows on the 100 and somethingth floors! But I laugh because even though it is completely outrageous, it is, for that reason, completely fun.