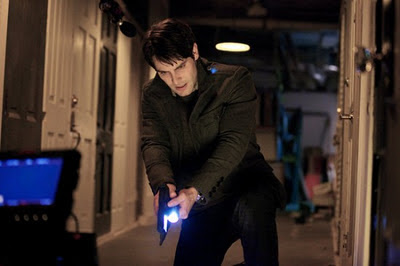 In an interesting -- and I'll be honest, completely unexpected twist -- last night's episode of Grimm took its cue not from a classic fairy tale but from John Steinbeck's Of Mice and Men. Okay, the English major in me isn't going to complain, but really? You're only in episode nine of season one, it's not like you've come close to exhausting the Brothers Grimm backlog. But whatevs.
I'll be honest, at first viewing the morphing and body-switching in this episode was a bit confusing -- I'd recommend the episode guide for helpful clarification if needed.. *wink* The hour opens with a brutal slaying in a parking garage, where an elderly man dressed in entirely age inappropriate (read: heavy metal) clothing gets a screwdriver sunk in his throat. The next day Nick (David Giuntoli) and Hank (Russell Hornsby) are called to a crime scene where a garbage truck drive discovered the body of a much younger man, identically dressed and dispatched as the victim we just saw killed, in the back of his truck. The trace the victim to a rather seedy-looking apartment complex where the manager (who I found to be freaking hilarious) tells them that the victim was last seen fighting with Mason Snyder, a lawyer living down the hall (really thought the lawyer could do better apartment-wise), and that his girlfriend Natalie, also present the previous evening, is now MIA. Nick and David track down Natalie, who brings another individual into the picture -- the meek and mild-mannered Marty who first attempted to break-up her fight with Lenny. When the brawnier Mason showed up, Natalie fled, last having seen Lenny alive and well.
It was no real surprise that the mild-mannered Marty turned out to be a Mauhertz, a mouse-like creature, who runs a junk shop. His manner, his work, heck even his living arrangements as later revealed all call to mind a life-size mouse's den (*shivers* ick, ick!!). Despite my aversion to mice in general, at first blush I thought Marty was actually kinda sweet -- and herein lies the genius of this episode's storytelling -- I pegged the flashier, more aggressive character as the villain. Maybe I'm just slow, maybe it's this stupid cold (I'm going with the latter option just for the record), but until about halfway through the episode when Nick and Hank discover the dead body of Marty's father, I really thought he was going to be an innocent, would-be victim. I mean Mason the snake (ignore the cliche of making a lawyer a snake *sigh*), or Lausenschlange as they are apparently known in the Grimm world, was SO. FLIPPING. COOL. Seriously, the Harry Potter make-up department could've taken lessons from this episode on how to up Voldemort's creep factor.
When an auto repair shop owner seemingly morphs into the same old guy killed at the opening of this episode, and later Mason the creeptastic lawyer meets the same fate, Nick and Hank turn their investigation to the mild-mannered Marty. And here's where this episode tricked me -- I wasn't paying close enough attention to the victims' transformations to realize they were identical -- I thought they were all mice creatures, which is why I thought Marty would end up being a target instead of a perp. Once it is revealed that Marty, the put-upon, brow-beaten son has snapped, taking to seeing his father everywhere and killing anyone who crosses him, well I thought it was just brilliant and tragic all at once. Because the script let us see that Marty could be nice, he wasn't a born killer like the Lausenschlange lawyer, he was gentle man where something when horribly, horribly wrong -- half the tragedy of the case. 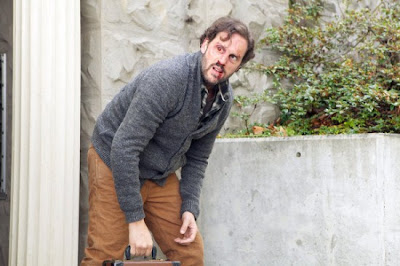 The second half of this episode was devoted in part to Monroe (Silas Weir Mitchell) discovering the costs of befriending Nick. First of all, how adorable was he getting all geeked out over the phone call he receives to repair an old clock tower? How is it that seeing Monroe so into clocks seems to never get old? LOL! Of course this was a set up (why I could figure that out, but the whole morphing mouse thing confused me??), and when he arrives at the job he's beaten up by a bunch of creepy looking Grimm creatures. When he awakens he discovers a reaper's scythe painted in blood on his car's hood -- clearly he's being warned away from Nick. But the best part of all this is how he refuses to be cowed. Nick is ready to dissolve their unofficial partnership in order to protect Monroe, and when Monroe is all "hell no!!" I cheered, yes I did. Loved the subtle glint of relief/thankfulness in Nick's eyes at that moment -- glad to know he recognizes the importance of what Monroe is doing in siding with his hereditary enemy.
This episode also sees Juliette (Bitsie Tulloch) running across more weirdness thanks to her relationship with Nick. Ever since the refrigerator repairman recognized Nick as a Grimm, it seems as though some of the creature world's more easily frightened types have taken to spying on his house, a fact that (understandably) creeps Juliette out. This raises a couple of interesting possibilities -- do they think she's a Grimm as well, or do they assume that because she lives with a Grimm she must be privvy to "trade secrets"? How long is it going to be before someone assumes she's a Grimm and attacks her, or attempts to use her as leverage to get to Nick? Clearly this whole not telling her thing is bound to backfire, the only question is when and how, no?
Even though "Of Mouse and Man" may not have had the awesome fairy tale retelling factor of previous episodes this season, it was still a solid hour and good procedural with an unexpected nod to a literary classic. Basically when it comes to me and this show it can do no wrong -- and least not yet, anyway. *wink* Thoughts?
Posted by Unknown at 1:48 PM

The irony is, I knew as soon as they introduced Marty that he was the killer (though could be because I'd just watched a couple of episodes of Criminal Minds, through which I've learned to always suspect the least-likely person, not the obvious one)---but I had no clue that Monroe was being set up until he arrived and saw the For Lease sign on the door.

And I have a very strong feeling that Juliette is going to find out that Nick is a Grimm from someone else---whether it's someone putting her in danger or someone warning her of the danger of being near him.

What, you don't think Steinbeck was a Grimm? ;) I do have to wonder about the logic of that, but whatevs. I guess they're just establishing a precedent for doing whatever they want.

I knew Marty was the killer because they told us so in the previews. Thanks, NBC!

@Kaye - How funny, we're playing at opposites! Yeah the whole phone call felt too contrived for me (ironic considering the least likely person is so often the guilty one -- HA!). Tend to agree with you about Juliette as well. I like that they are upping her character's screentime!

@heidenkind - Yeah you are probably right. I just think episode nine? A bit early, but as you say, whatevs! And that is hilarious about the preview, I have no recollection of it LOL!

@Kaye - I did see that article! I wonder if she is the potential love interest for Monroe that I read about somewhere...??

"Seriously, the Harry Potter make-up department could've taken lessons from this episode on how to up Voldemort's creep factor."

Yeah, particularly in the first couple of films. But by the time they got to Ralph Fiennes, I was sold. =D

I love this show too and hope they can keep the intensity up. Hugs and have a great week! :O)

@Charity - I will give credit where credit is due, you are correct -- Voldy definitely improved as the films progressed. :)