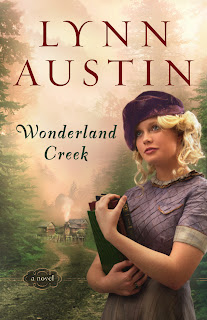 Wonderland Creek
By: Lynn Austin
Publisher: Bethany House
ISBN: 978-0-7642-0498-2
About the book:
I was perfectly content with my life -- that is, until the pages of my story were ripped out before I had a chance to live happily ever after.
Alice Grace Ripley lives in a dream world, her nose stuck in a book. But the happily-ever-after she's planned on suddenly falls apart when her boyfriend breaks up with her, accusing her of living in a world of fiction instead of the real one. To top it off, Alice loses her beloved library job because of cutbacks due to the Great Depression.
Longing to run from small-town gossip, Alice flees to the mountains of eastern Kentucky to deliver five boxes of donated books to the tiny coal-mining town of Acorn, a place with no running water, no electricity, and where the librarians ride ornery horses up steep mountain passes to deliver books. When Alice is forced to stay in Acorn far longer than she planned, she discovers that real-life adventure, mystery -- and especially romance -- may be far better than her humble dreams could have imagined.
Review:
Alice Grace Ripley was perfectly happy with her life, consisting of a steady boyfriend and a job she adored at the local library. Never happier then when she's lost in the pages of a good book, Alice is content to live vicariously through the lives of ink-and-paper characters she meets on the page, certain that nothing in real life can surpass the joy and adventure she finds between the covers of a new novel. But Alice's happily-ever-after is not the foregone conclusion she's long-assumed, nor will it be so easily achieved. First her boyfriend dumps her, accusing her of living in a fictional dreamworld, and then her library job falls victim to budget cutbacks thanks to the Great Depression. With nothing left for her in her hometown, Alice impulsively decides to personally deliver donated books to rural Acorn, Kentucky. Alice little suspects that the mountain community will change her life forever, challenging her beliefs and dearly-held assumptions about her bookish-centered life. Thrust into a real-life adventure bigger and more fantastic than any novel, Alice must decide if she has it within her to become the heroine of her own life's story.
Alice is an instantly recognizable soul to any bibliophile, as what bookish sort willing to be honest can probably own to the temptation to prefer books to people and fictional adventures enjoyed from the comfort of a favorite reading nook. Bright, well-intentioned, but immature and hopelessly naive, Alice has little inkling of what real life is like outside the sheltered four walls of her parents' home, Tom Sawyer's shenanigans the closest she's ever come to adventuring. Her sojourn in Acorn pulls Alice out of her comfort zone, forcing her to decide who she is, as she is, stripped of familial and atmospheric identifiers -- the golden opportunity to script her life's story. It's a challenge that ever individual as they transition from childhood to adulthood is given the opportunity to make, choosing what parts of our upbringing to carry forward, how the past is allowed to define us, and perhaps most criticially, why we believe what we believe, and how that faith translates to the art of a life well-lived.
As is the norm in an Austin novel, the author seems to possess an almost uncanny ability to transport her readers into whatever time period she's chosen to bring to life. Wonderland Creek is no exception; indeed, the isolated mountain community is painted on the page with a filmic flair, the action unfolding like one of Alice's favorite novels brought to life on-screen. Everything about Acorn, as seem through Alice's eyes, is almost otherworldly, which is fitting considering how removed she is from the comforts of home. Austin plays with a book lover's penchant for losing themselves in the world of a novel. In fact, I would posit that Alice's name is no accident as it surely must seem to her that in her quest to deliver books to Acorn she's fallen through the looking glass into another world, one filled with hidden treasure, feuds, and intrigue.
Austin peppers her novel with a host of memorable, well-drawn characters. There's Lillie, the fiesty 100-year-old former slave, now a revered midwife and healer, wo serves as the reluctant Alice's guide and mentor in the "alien" land of Acorn. And then there's Mack, the librarian/activist who clashes with Alice from their first meeting. He is a vintage Austin hero, upstanding, moral, the type who really SEES the heroine's best self. Austin's romances are among my faovrites, and Mack and Alice are no exception -- an attraction born out of their shared passion for books, a bond forged in life-threatening trials -- theirs is a relationship where what isn't said is as compelling as their carefully painted encounters on the page.
Replete with unforgettable characters, Wonderland Creek is Austin's love letter to bibliophiles, and a moving tribute to the real-life packhorse librarians who brought the magic of the written word into remote mountain areas like Acorn. Alice's story is a beautifully-rendered example of the power of story and a reminider that the greatest story is the one co-authored with the God whose dreams for our future outshines the most fantastically plotted novel.
Posted by Unknown at 9:11 AM

This sounds like a good book! Sort of shades of "Christy" to it, which is one of my ultimate favorites. I'll keep watch for this one!

@Heather - This novel has drawn a lot of comparisons to Christy, and justifiably so -- hope you can read this one soon, I think you'll like it!