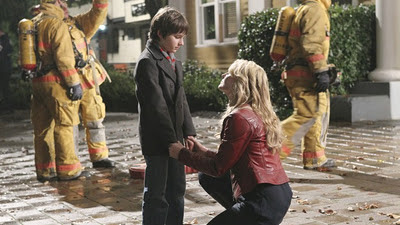 Following Graham's shocking death, Once Upon a Time returned this past Sunday proving that yes, indeed, there is life after that CRUSHING HEARTBREAK (maybe I'm still a little bitter, hmm? *wink*). Emma (Jennifer Morrison) appears to be this great mixture of heartbroken and determined after Graham's death, the grief over what could have been spurring her to carry on his work as sheriff. This desire is solidified by a conversation with the enigmatic Mr. Gold (Robert Carlyle), who urges her to accept a keepsake from Graham's possessions and tells her that as deputy after two weeks she is free to assume the role of sheriff. Regina (Lana Parrilla) is of course having none of that, determined to remove the thorn that is Emma from her side once and for all by using her power as mayor to appoint her lackey Sidney Glass (Giancarlo Esposito) as the new sheriff and firing Emma. Surprising us once again it's Mr. Gold who informs Emma that Regina is not as powerful as she might think, and offers to back Emma in an open election for Graham's empty office.
Unlike Emma, we all know that since Mr. Gold's Fairy Tale Land alter-ego is Rumplestiltskin that he can't and shouldn't be trusted, but the questions of what drives him and how he became a manipulative, power-hungry dealmaker have remained unanswered thus far. This episode begins to address that by lifting the curtain on Rumple's backstory. Not surprisingly, Rumple was a poor weaver (a nice nod to the character's traditional story), but more surprisingly he was a devoted father. At this point in Rumple's corner of Fairy Tale Land, children are being forcibly conscripted in the army to fight in the ogre wars, a sure death that Rumple is determined to protect his son from, especially since he lives in disgrace having fled from another battle in fear (where he earned his limp, apparently).
This episode plays with an idea that's been mentioned multiple times since the start of the series -- the idea of magic having a price, of exacting a terrible toll on those who use it. Rumple's story is perhaps the show's starkest example yet of the price of magic, and how it can strip one of his or her humanity, their ability to love and feel. I can't remember the show mentioning the "Dark One" prior to this episode, so please let me know if I'm forgetting something. ANYWAYS...a beggar (played by Brad Dourif -- yay for Lord of the Rings alum!) manipulates Rumple into stealing a dagger that controls the Dark One's power, only said beggar turns out to be the Dark One, who'd rather die than live with the burden of magic and its power any longer. YIKES. This idea that there are forces that just shouldn't be trifled with, that no matter how well-intentioned a person is when approaching the use of magic the temptation to take things too far will always be there -- it is a powerful, intriguing concept and I look forward to seeing how the show develops that theme. Particularly in relation to Emma, as her lack of knowledge and understanding about the curse and everyone's fairy tale counterpart is potentially a handicap and a very real threat to her well-being. 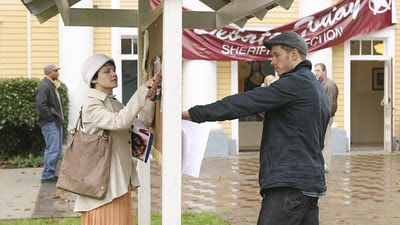 Besides providing us with Rumplestiltskin's backstory, this episode once again gave Morrison a chance to really shine and show us Emma's heart. I've liked the Emma/Henry (Jared Gilmore) dynamic from the beginning, but even more so now as Emma is really settling into life in Storybrooke and wrapping her head around the idea that she wants to be a part of her son's life. And seriously, who wouldn't? Henry is ADORABLE. When I saw how upset he was over Graham's death I just wanted to give him a hug -- that kind of guilt, over feeling responsible for Graham's death (and LIVING in the home of the woman you know is responsible) would be a heavy burden for anyone to bear, particularly a child. Graham's death was a wake-up call that "Operation Cobra" isn't just a game, this whole secret identities/curse thing is very real, with consequences to be weighed each step of the way.

Wonderful, messed-up Emma desperately wants to be a hero for her son. And for as much as love seeing Morrison open up her character, make Emma vulnerable, I can also see where this very well-intentioned desire has the potential to be Emma's greatest risk, her Achilles' Heel -- and Mr. Gold knows it. As far as the election results go, the jury's still out for me as to whether or not Mr. Gold engineered the whole thing -- the fire, Emma's response, the townspeople rallying around her, or if he just reacted to events and adjusted his response accordingly. I'm quite intrigued by the notion that people dislike Regina but fear Mr. Gold -- and I can't WAIT to see how that plays out in relation to the curse. I have a suspicion that in unleashing this curse, Regina (unintentionally?) put herself under Gold's power -- thoughts?
A few more quick notes -- first of all, how hilarious was it that Sidney Glass is a very literal mirror for Regina's thoughts and policies? Nicely done. :) It was great to see Archie (Raphael Sbarge) again during the pre-election debate, even though he was such a sorry moderator. And who else besides yours truly is ready for Granny (Beverley Elliott) and Ruby (Meghan Ory) to earn their status as series regulars? They regularly pop up in Storybrooke crowd scenes, but so for Ruby's most noticeable quality is looking pouty and wearing entirely inappropriate clothes. *sigh* It is past time for the show to delve into Little Red Riding Hood's story (apparently that is slated to occur in the January 22nd episode).

And finally, since I'm having to get used to a Graham-less Once, I have to draw special attention to Mary Margaret (Ginnifer Goodwin) and David's (Josh Dallas) meeting while canvassing for opposing candidates in the sheriff election. COULD THEY BE ANY MORE ADORABLE?! I mean SERIOUSLY!!! The chemistry between them is just white-hot even when they're antagonizing each other. I love it. Note to the Once writers: After this whole Graham debacle, if you touch one HAIR, one SINGLE HAIR on Charming's head you all are DEAD to me. I don't think I could take THAT. :P
Posted by Unknown at 3:13 PM

Thanks for your blog, I like reading it alot.
I think the writers are hinting that Gold/Rumpelstiltskin wrote a clause in the curse to get Regina to one day take his power. She's driven and empty enough to become the "dark one". And who knows maybe Rumpelstiltskin's son is in Storybrooke too?

You made me laugh out loud at the end of this review Ruth, but I'm so with you on this. DEAD, I tell you!

I like this show more and more, even with what they did to Graham. Sigh.

I agree. Time to see a Ruby centric episode for crying out loud. Glad to know it's on the way.

Oooh, Denise. I never considered that outcome for Regina, but it would (I was going to say "serve her right" but how could you with THAT on anybody, even a fictional baddie? I'm such a fan of redemption stories, but I doubt Regina's will be one) be quite believable.

@Denise - Thanks so much, that means a lot! I appreciate your comment. I think your theory is VERY interesting -- I had the thought at the end of this episode that Gold was perhaps trying to manipulate Emma into becoming his replacement -- but I could easily see Regina being his primary target as well, since in casting the curse she's pretty far gone...or so it seems.

Me too, I am really looking forward to finally getting some insight into why Ruby is a regular cast member!

*gasp* Graham dies!? The same Graham who broke your heart a few weeks ago by plotting with the enemy!? That same Graham, Ruth!?

O.K., I think I've gotten across which Graham we are all talking about. I'll stop now. ;D

Note to the writers of Once Upon a Time: I'd take Ruth's "threat" seriously - and if I were watching your show right now, I'd probably be right there with her. We like happy-ever-afters, and that is kind of hard to have minus a hero. =)

@Rissi - I KNOW, RIGHT?! (BTW, regarding the breaking my heart a few weeks ago thing...all is forgiven because he was ENCHANTED!) I have to admit this post cracked me up a bit because I was pretty dramatic in my post about the previous episode, LOL! OBVIOUSLY I'm still trying to come to terms with this... ;)

Mary Margaret and David are too cute. I love that they were both wearing adorable hats in that scene.

This episode was pretty good. Rumps is still the most interesting character on this show, I think.

The show's intro this week had little glimpses of Graham - so good to see him, but sad too. I couldn't believe Emma wouldn't take his jacket!

I am so ready for a focus on Mary Margaret and David again....I so stinkin' love Josh Dallas. I have to agree, if they harm a hair on his head, I will storm the writers' home!!!

I'm excited for all of the episodes coming up: Hansel and Gretel, Beauty and the Beast, Red Riding Hood.....yep...this show is highly entertaining and addictive

Thanks all. I wonder if Gold has figured out a way to end the power passing on? So Regina might be the last "dark one" by taking the dagger and doing something so awful that it splinters? Or killing herself when Gold says "Please...", ooooh... I do love villains with some smarts and vulnerabilities. And yes folks I agree, don't hurt James a bit!

@heidenkind - I KNOW! I want Mary Margaret's hat SO BAD!!

Love that even though this episode gave some insight into Rumplestiltskin there is still so much we don't know. The character is such an enigma!

@Katie - I know, I was seriously nostalgic. Glad Mr. Gold left the jacket w/ her at the end of the ep, though!

@Ella - Me too! :) I am especially looking forward to the Beauty and the Beast ep!

@Denise - Thanks for helping to spur some interesting discussion! :) I am very curious if Mr. Gold and Regina's "rivalry" is personal, i.e. is he interested in beating HER...or just in claiming power in general?

Hmmm... I must have missed that review covering Graham's redemption.

This sounds like a good episode. And I missed it! I'm terribly behind at Pan Am and OUaT, and I went to Hulu today and saw that this episode has expired. So I had to come read your recap before I can move on to the next episode. :)

@Kristin - Can I just say I'm glad I'm not the only one who fell behind in this show? ;)