I love David Tennant. LOVE HIM. So when I heard about his romantic comedy The Decoy Bride, I was desperate to see it -- and this Friday, thanks to IFC, I'll finally have that opportunity. :) 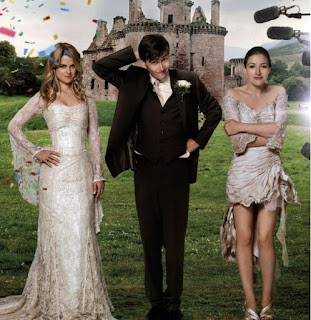 
When the wedding of internationally famous film star Lara Tyler (ALICE EVE) to tweedy English author James Arber (DAVID TENNANT) is sabotaged by a paparazzo, they decide to relocate the event to the one place where the world’s press won’t find them: the sleepy Island of Hegg, as featured in James’ bestselling novel The Ornithologists Wife. But to the shock of Lara’s P.A Steve Korbitz (MICHAEL URIE), the reality of the island is different from the romanticised picture James has created (without ever visiting), and he has to transform this fantasy world before the superstar arrives.

However, dilapidated buildings and greedy islanders are the least of the problems that the wedding party and their Hollywood entourage have to deal with, as Marco (FEDERICO CASTELLUCCIO) the ingenious paparazzo tracks them down in his mission to photograph the celebrity wedding of the year.

Steve and his assistant Emma (SALLY PHILLIPS) must find a decoy bride and think that local girl Katie (KELLY MACDONALD) will be an ideal replacement. But when Katie meets James, sparks fly, dresses get ruined and love gets complicated.

Will Katie be able to fool the awaiting media and live up to being a stand-in for the world’s most famous movie star? Can an ordinary girl fill the most famous Manolos on the planet? And whatever will happen to her pledge never, under any circumstances, to fall in love again?

I can't wait! David Tennant as a "tweedy English author"? I am SO there. :) Accordign to the IFC website, this film is available On Demand starting Friday, February 3rd, and in theaters March 9th.
Posted by Unknown at 4:06 PM

Thanks for the heads up! I will set my DVR.

Favorite lines:
"Has the marriage been consumated?"
"I just haven't had time..."

Great trailer, David Tennant looks adorable in this and Kelly MacDonald is awesome as always. I think I need to watch this now =D Thanks for sharing!

@heidenkind - HA!!! I know, right? ;) I haven't found that IFC is broadcasting it...let me know if you come across a date/time. I am definitely doing the On Demand rental thing this weekend!

@Nat - It looks like so much fun! That consummation line cracked me up! His expressions are so priceless... :)

@Lianne - Thanks for stopping by! I am happy to see Kelly MacDonald in this movie too, I really like her. Great to meet another Tennant fan! :)

I love this trailer! So funny. So far, the DVD is only available for pre-order on amazon uk. I so hope it becomes available in the US. This looks absolutely hysterical.

@Holly - I'm hoping Amazon has a US pre-order link up soon -- I rented the movie On Demand this past weekend and it was HILARIOUS!

Um, so I'd love to read a review of this. Juuuuuuust sayin'. :-P

@Alexandra - Oh, this WILL be reviewed. :) I need to watch it again (and I'm sure you won't be surprised I've preordered the DVD). It is ADORABLE.