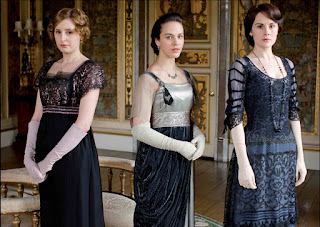 That squeal of joy you hear? That's me, beyond thrilled that this day is finally here! Downton Abbey Series 2 premieres TONIGHT on Masterpiece Classic! Here's what we have to look forward to:


Downton Abbey's Granthams and their family of servants have already weathered scoundrels, scandals, and a momentous succession crisis. But by November, 1916, the Great War has rendered everything — and everyone — changed. Even Downton Abbey itself, like its residents, has risen to the call of duty and transformed.

At the war front, life intensifies for Downton's young men in the face of untold horrors. Meanwhile, at Downton, war makes new and often unjust demands. Some rise to its call for a stiff upper lip and a useful turn, and others see change as an opportunity for either growth or exploitation. Far from the trenches, there remains no shortage of scheming, meddling, and dangerous attractions.

As other great houses crumble, a diminished Downton Abbey struggles to prevail into a new era with its residents and its honor intact. Maggie Smith (David Copperfield, Gosford Park), Elizabeth McGovern (A Room With A View), Michelle Dockery (Return to Cranford), and Dan Stevens (Sense and Sensibility) return with an all-star cast to season two of Julian Fellowes' Emmy Award winning drama, Downton Abbey.

And here are links to my Series 1 recap and review posts, just in case you need something to read this afternoon to while away the time until the premiere. *wink*

I'm so excited! Though I won't be able to see it until tomorrow, because they don't put it online until then. But I'll be spending my afternoon today finishing rewatching the first season. :)

I'm so ready to curl up on my sofa and enjoy another season! Exciting!

I'm squealing with you!

I told you it would be here in a blink. :) I'll likely watch tomorrow sometime, if PBS puts it up the day after like they did with season 1. Too late for me!

Only another month until the DVD's - I cannot wait; counting down the days 'til it returns to my TV screen! It looks/sounds wonderful even with the darker tones. Plus, I think fans will be delighted with the overall conclusion. ;D

Oh I am so excited, it's a wonder I slept. Just go the PBS catalog in the mail and of course it's loaded with DA stuff. I could rewatch the entire first season for the fourth time (streaming video rocks!) or write.
Either way I'm glad I'm in such good company.
I'm probably going to be participating in a twitter party as well -unless it becomes a distraction.
locally, our station shows a re-run of Masterpiece. I really expect to watch it again right afterwards.

Wondering where the real battlefields will be, France or the house?

I have already seen Season 2 online but it definitely worth the rewatch. After the Christmas special, I am desperate to find out what happens next!

Like Lydia, I have already seen it, but it is definitely worth the rewatch! It was so good and Series 3 is going to be absolutely amazing!!

Wasn't the premiere of Season 2 amazing? I am so, so happy Downton is back on my TV screen! :)