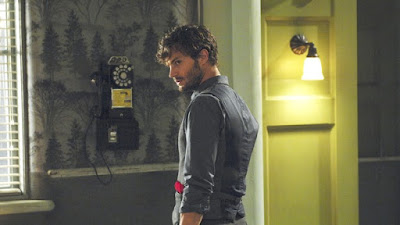 Well...I suppose it is about time I finally talked about the fall finale of Once Upon a Time, since the show returns with new episodes 1/8/12. I've put off long enough (*cue the dramatic sighs*) talking about episode seven, also known as "The Episode That Shall Not Be Named" or "The Episode That Shall Forever Live in Infamy" or my personal favorite "The Episode That Ripped Ruth's Heart Out, Stomped On It, and Left Her Emotionally Eviscerated." At the end of episode six, Emma (Jennifer Morrison) made the shocking discovery that Sheriff Graham (Jamie Dornan) was sleeping with Regina (Lana Parrilla) -- girl, I was shocked, appalled, and disgusted too. Little did I suspect when their dalliances first came to light that Graham would become so rattled when his secret was out. From the beginning of the show he has presented a cool, collected, and compassionate demeanor -- definitely his own man, if you will -- extraordinarily comfortable in his own skin -- and with that read on his character I suspected that it would take a lot to get him to care what someone else thinks -- make sense?
My theory is that all of the above regarding Graham's character is true, especially as this episode reveals his Fairy Tale Land backstory. And that makes sense, since Emma's arrival in Storybrooke is "cracking" the curse's stranglehold on the town and its residents -- and if Graham was a headstrong loner in Fairy Tale Land, it follows that the disruptions Emma's presence is causing will impact him in a major way. While it was no surprise given my speculation as to Graham's fairy tale counterpart since episode one, it was still highly gratifying to have the show finally and officially confirm that Graham was the Huntsman of Snow White's legend -- the man tasked by the Evil Queen with killing Snow. But unlike the Huntsman of tradition, this one is no longtime lackey of the Evil Queen. Stupid to agree to accept the job? ABSOLUTELY. But this Huntsman is a loner -- raised by wolves, he has more of an affinity for the wild creatures he knows so well than other humans. Some would call him heartless, but as his interaction with Snow White (Ginnifer Goodwin) proves, he has more of a heart than perhaps he even realized -- and his decision to grant Snow mercy results in horrific repercussions, costing him his freedom, his free will, his feelings -- the very essence of what makes him an individual, what makes him human.
A couple of quick points about the Fairy Tale Land scenes in this episode -- I thought it was very interesting that we glimpsed Snow White's father's funeral. At that point in Snow's life, she was actually close to her stepmother the Queen, apparently unaware that the Queen is playing her, seeking revenge for an as-yet-unnamed wrong. (Though seriously, after this episode I could care less what Snow did to the Queen, nothing justifies how far she's gone off the rails with her heart collecting fetish.) Regarding the Queen's plot, it was nice to see the Magic Mirror (Giancarlo Esposito) again, even though it is pretty apparent he was always in the Queen's camp. 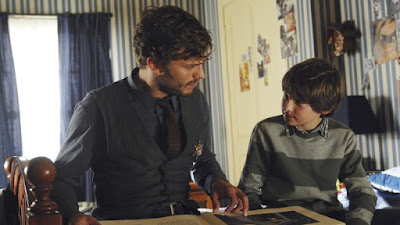 For as much as this episode ripped my heart out (ironic considering Graham's fate, HA), it was just pure awesome and amazing from start to finish -- and that's the way to go, if you're going to pull a shocking twist like this in only episode seven of a new series. It helps me cope. :) Dornan's acting was just superb in this episode -- so, so good it just kills me that there is a good chance we'll never see Graham again, if Dornan's post-episode interview is to be believed. I loved how Graham's revelations about his true self sort of "snowball" as the hour progresses, and as crazy as most would find his dreams/memories, there's apparently so much truth in them that he can't deny their veracity. I mean how adorable is it for Henry (Jared Gilmore) that he finally gets an adult seeking information about his storybook theory -- I loved that scene of the two of them together, especially Henry's indignation at Graham's confession that he kissed Emma. *wink*
I would love some theories on what exactly Mr. Gold (Robert Carlyle) was doing in the woods when Graham stumbles across him, the first time he chases his wolf-guide into the woods. I totally do not buy his gardening story. I mean seriously, who gardens in a suit wearing what looks like a butcher's apron??? Anyways, speaking of Graham's wolf (first seen, if you remember, when Emma tried to leave Storybrooke and crashed her car) -- do you think we'll see him again? It just KILLS me that this wolf has been in Storybrooke, sort of Graham's guardian angel, if you will, and then Regina does the UNTHINKABLE. GRR!! 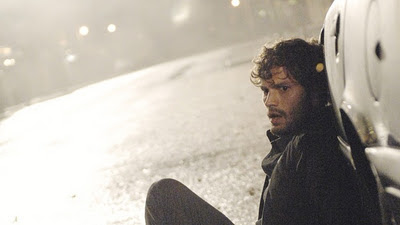 Earlier in this episode, Mary Margaret calls out Emma for putting up walls around her heart, for refusing to let herself get close to anyone, particularly Graham. I love how Morrison played Emma's reaction to what by anyone's standards would have been off the rails behavior. And when she realizes that despite Graham's crazy talk something is happening, something is clicking within him that allows him to stand up to Regina's manipulations, you can see her start to melt -- and that makes his death all the more tragic.
Even though I knew that Regina is wholly aware of the curse, I was still bowled over by her entrance into the crypt that led to her heart cache in Fairy Tale Land. That moment was a fantastic reveal. And even though I knew she was the Evil Queen -- the evil denoting BAD, obviously -- I was completely shocked by just how wicked she really is. The idea of acquiring hearts and all that implies, of turning individuals like the Huntsman/Graham into slaves, robbing them of emotion, the ability to feel, to follow their own heart -- oh it gave me chills. The moment before Regina crushes Graham's heart, when he and Emma finally kiss, was beautifully played (right down to the single tear tracking down his face as he thanks Emma for helping him remember his true self), giving Morrison a chance to deliver some of her finest acting thus far in the show. Her hope, quickly transitioning to horror when Graham collapses is the first time I've really and truly connected with her emotionally.
For as devasting as Graham's death was (and trust me on this, I was yelling at the television), this episode was brilliant. I'm looking forward to seeing where Once takes us next! I'd love to hear your thoughts on this episode -- and feel free to give me hope and theories on how Graham as Graham (not the Huntsman robbed of his heart) may pull a fast one and return. Because I can happily live in denial that he's gone for good. :)
Posted by Unknown at 8:20 AM

I have no idea what Mr. Gold was doing out there. Did he have a shovel? Because I'm thinking he did and if so, was burying something. Or someone...:)

I just want to know what on earth Snow White did to the Queen! It's driving me crazy because it's mentioned multiple times in each episode, and I just wonder how long they're going to keep dangling that in front of us!!

FINALLY! I've been waiting to read your take on this since it aired! :) You always have such cool recap posts, thanks. This episode made me mad as well an I too am holding on to the hope that he will somehow return and will happily live in the land of denial with you!

Kristin
This gives some insight as to what is coming up with the queen.
http://www.tvguide.com/news/once-upon-time-lana-parrilla-1041311.aspx

Well, if the Queen can make time freeze, she can make time go back, right? I'm thinking she might try to pull that if Emma gets too much of an upper hand. An alternate timeline where Graham is still alive? Sign me up!

I just hope the ratings for the show don't go down now that he's gone. Since we KNOW Snow and James/Mary and David won't get together for a while, it was nice to have another couple to root for.

And I'd love it if the wolf befriends Emma now. He, for one, seems to know a bit of what's going on - remembering the Huntsman, stopping Emma from leaving, etc.

I know! Maybe Graham is the Wolf and the Wolf is Graham and she really killed the Wolf in Graham's body when she crushed that heart and....

No. I don't even believe it.

I was so yelling at the tv too. Broke my heart!

I've watched all the episodes of this series in a period of two days on Hulu, so I just became a fan of the series. I felt the same way about the Queen in this episode: I couldn't believe how bad she is. Still I should have known that, since she killed her own father. But I was very glad when Emma punched her, FINALLY.

I know you think this will sound crazy, but I almost don't what Graham to come back to life. Here's why: most of the shows I've watched and tried to get into (like Lost and Heroes) have a similar problem: characters cannot die. It infuriates me because some characters die at least three times. It's as if the writers think the audience can't handle a death in the show- but it's just irritating when some people come back over and over again. If Graham comes back to life, it better be once and for all, and it better be only him coming back to life. Not every other character.

I was so upset at the end of this episode that I was prepared to stop watching in protest. However, I love the show so much I just couldn't stay away from last night's new episode. I'm glad I didn't. It was great.

Yep, Mr. Gold had a shovel...and I think he HAD to have been burying something or someone...but what?! Oh the suspense!!

I think we're going to find out more specifics about Snow's great wrong to the Queen...at least we'd better!

@Abbi - LOL! Oh thank you, I didn't mean to make this wait so long! Welcome to the land of happy denial. :) And thanks for posting that link!

@Katie - I can go there with you! And if Graham DOESN'T come back, whoever they might introduce as a potential "replacement" love interest for Emma has A LOT to live up to! And like you, I hope this isn't the last we see of the wolf.

@Lizzy - Oh I am with you, when Emma punched Regina I cheered. That was LONG overdue. And I can see where you're coming from regarding Graham -- having something like this STICK, despite the tragedy/controversy -- well ultimately that raises the stakes for everyone else who remains.

@Karrie - I was tempted but discarded that thought pretty quickly...I'm too hooked. And last Sunday's episode - AWESOME. Review post to come!